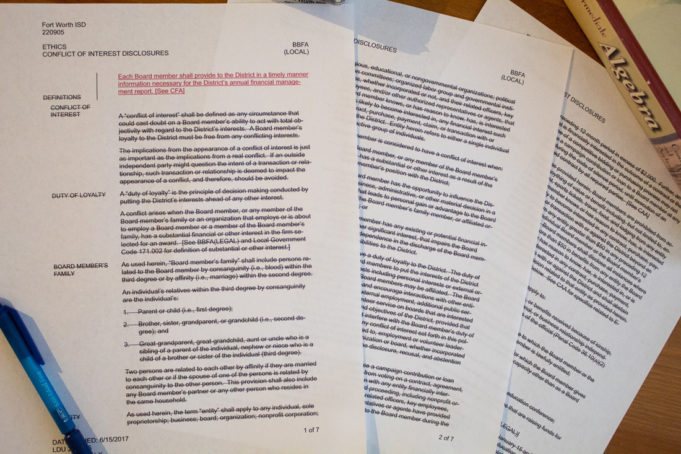 Uncovering and documenting backdoor dealings and political maneuvering at the highest levels of local politics often leads to redacted documents, unanswered phone calls, and appeals to open records requests. Last year, we published an expansive look into the gutting of the ethics guidelines used by the Fort Worth school board (“Ethics for Sale,” May 30, 2018). Weekly reporter Edward Brown spent several months investigating allegations of meddling on the part of a prominent national law firm — Linebarger, Goggan, Blair, and Sampson — that led, according to our many sources, to the temporary scrapping of the school board’s ethics guidelines.

The ethics policy would have limited the influence of outside money on school board dealings. Somebody, or some group, might not have been happy about losing leverage over the school district’s lucrative contracts. School board member Ashley Paz believes that Linebarger directed former school board president Tobi Jackson to rescind the strengthened ethics policy to ensure that Linebarger’s campaign contributions could continue with minimal restrictions or need for public disclosure. Linebarger donates heavily, both locally and nationally, to campaigns that can influence its debt-collecting business. Following public uproar over the scrapping of the ethics policy, the school board later restored many of the key provisions.

We ran the story without one piece of information after being told by the Texas Attorney General’s office that the requested documents could not be released due to attorney-client privilege. What we were after was a legal opinion from April 26, 2016, that says there’s nothing illegal about the relationship between Jackson and Linebarger. We recently obtained a copy through a confidential source, and while there certainly isn’t anything illegal about the relationship, there was a conflict of interest that should have been disclosed.

Possibly to preempt public backlash, Jackson sought the legal opinion one month before she voted in favor, along with every other board member except Paz, to award Linebarger a six-year contract worth several million dollars in profit to the law firm. At the time, Jackson was serving as executive director for Fort Worth SPARC, a nonprofit that provides after-school programs in Fort Worth. Barbara Williams, a partner with Linebarger, served as chairwoman on SPARC’s board of directors, meaning that she partly contributed to Jackson’s $24,000 annual SPARC salary at the time. Therein lies the potential conflict. Jackson’s request for the legal opinion from Leasor Crass, a Mansfield-based law firm that specializes in education law, was answered by Leasor Crass managing attorney Rhonda Crass. Jackson had asked if a conflict of interest would arise when she voted to award funds to Linebarger at the upcoming school board meeting.

Crass replied that, in her opinion, a business relationship that would require disclosure would arise if three criteria were met: 1.) SPARC converts to a nonprofit (which is moot because SPARC already was a nonprofit), 2.) SPARC contributes taxable income to Jackson that exceeds $2,500, and 3.) Linebarger seeks or plans to seek “additional contracts” with the school district.

“If it is determined that these factors create an employment or other business relationship between yourself and Ms. Williams, you will need to disclose this interest by filing a conflicts disclosure statement,” Crass said. “You may choose to abstain to avoid the appearance of any impropriety.”

At the time, SPARC was filed as a 501(c)3 charity, according to public IRS documents. Jackson’s taxable income from SPARC was certainly above $2,500, given her $24,000 salary that year, and Linebarger was seeking (and soon after awarded) a contract with the Fort Worth school district. Based on the criteria set out in the legal opinion, Jackson was advised to publicly disclose her business relationship with Linebarger, which she never did.

Jackson told us in an email that her income that year came from a $765,000 Wallace Foundation grant that SPARC was tasked with administering. When a charity such as SPARC is awarded a grant, those funds can be earmarked for specific projects, including for salaries. Jackson maintains that no funds were directly paid to her from SPARC’s board of directors, which also held a Linebarger partner as a board member.

“Just as I have stated all along, I asked for and had requested and received a legal opinion before I cast the vote” to award Linebarger the six-year contract, she said in her email.

Jackson can entertain that distinction because public tax records from SPARC that year are short on details. Disclosures of conflicts of interest are a rarity in Fort Worth. Without serious penalties for failure to disclose such conflicts, there’s always the potential for a “vote now and ask for forgiveness later” approach by city and school board members. Even when a lawyer advises disclosure or a vote abstention, that advice isn’t always taken seriously under the current system.