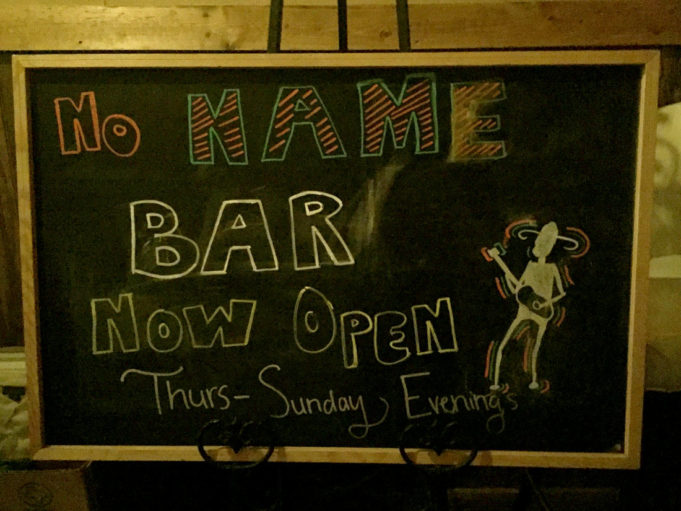 As ashamed as I am to admit it — especially as a Fort Worth native — until last week, I had never dined at The Original Mexican Eats Cafe, so when I was assigned to scope out its neighboring pub, No Name Bar, I eagerly prepared to check this local rite of passage off my bucket list.

The Tex-Mex restaurant, which opened on Camp Bowie Boulevard nearly a century ago, boasts several visits from former President Franklin D. Roosevelt — enough to elicit a special in his name. Conversely, from what I gleaned from its inactive Facebook page, No Name Bar opened in 2015 and possesses no such legacy … yet.

The historic cafe lived up to its hype. After indulging in delectable enchiladas and frosty house margaritas, my group meandered along the strip of modest shops lining the bustling brick road. Chins skyward, we searched for any sign of the bar, literal or figurative. 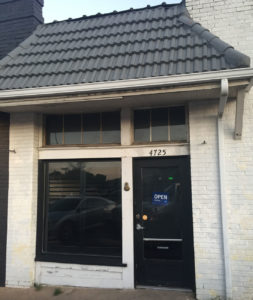 Perplexed, we eventually halted before an unmarked storefront, its window shade pulled three-quarters down, a single bronze pineapple adorning its frame, and a curiously generic “Open” sign suctioned to the glass. When the door wouldn’t budge, my friend shrugged and knocked. Shuffling feet appeared in the exposed fourth of the ingress, which swung open in an onerous flurry, and a man resembling actor Steve Buscemi in both looks and mannerisms apologetically ushered us inside.

Not quite as nondescript as its façade, No Name Bar exudes a nonchalant “take it or leave it” attitude. Despite some distinguishing features that pop out — a pair of trumpets fastened to the wall, an eerie green hue radiating throughout the bar’s slender interior, a teetering tower of vinyls threatening to topple over — this tiny, dim drinkery makes little effort to please.

In contrast, Buscemi’s doppelgänger, who acted as bartender, manager, and DJ rolled into one, filled the small space with his remarkably chatty, charming nature. Equally twitchy and accommodating, he was everywhere at once, bouncing between groups and ensuring no patron was without a beverage. 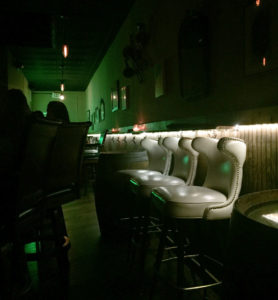 We chose the only spot spacious enough for our party: mismatched wood tables with bench seating on one side and antique leather desk chairs on the other. Plopping into a chair, I gasped as, to my friends’ delight, I was thrown backward with a startling creak. The word “fitting” sprung to mind.

Huddled around the coral glimmer emitting from several glass candleholders, my party decided on margaritas as Whitney Houston belted, “I will always love you” in the background. I hesitated to order another, but “Steve” proudly assured me his margarita recipe was his own, distinct from the restaurant’s. I’d wager he crafted the deliciously potent cocktail with top-shelf tequila. 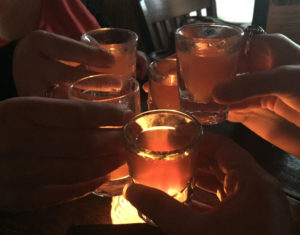 Though we had barely sipped our margs, Steve insisted on inventing a shot specially for us, which he tasked us with naming. I grinned at the irony of christening a drink while sitting in a pub with no name. The mixture tasted of fruit and rum, similar to a Jolly Rancher, so we cheekily pitched the name “Melonjolly.” Steve nodded in careful consideration, and soon, words flowed from his lips in a sort of stream of consciousness — a new concoction materializing in his mind.

Later, I figured I should order from the menu. Surprise, surprise: Tropical Paradise. Lacking the proper fixings, Steve promised to whip up a drink I’d enjoy, and I dared not question the seasoned mixologist. 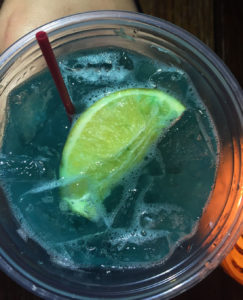 He didn’t disappoint. I relished the scrumptious vivid indigo cocktail laced with lime and coconut. “Careful! That’s 1800 tequila in there …” Steve’s warning fell on deaf ears. Tequila tipsy and sore from raucous laughter, my group closed the place down at 10pm.

No Name Bar is aptly named because it doesn’t strive for convention. The establishment’s no-frills atmosphere attracts who it wants and refuses to pander to the rest. So go. Or don’t. But if you do go, you can bet the staff will be attentive and your drink will be well-crafted. And isn’t that what counts?