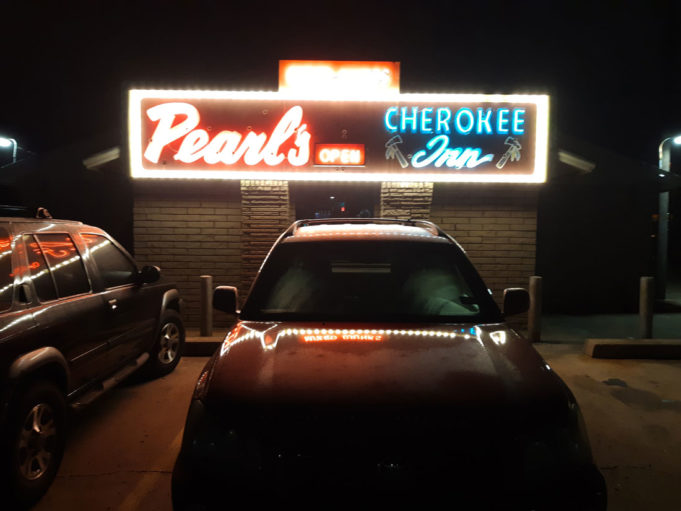 I was offered a mission to get out of Fort Worth, and I accepted free spiritedly. But where to spread my diving wings? After a little research of the intentionally un-salubrious drinking parts of the 817, I happened upon three compelling-sounding bars. In a half-mile stretch on and around West Division Street in Arlington, I unearthed Stumpy’s Blues Bar, Pearl’s Cherokee Lounge, and Tanstaafl Pub. Further inspection found the delightful confirmation that these bars fitted the bill –– at once unplanned, unfussy, and unpretentious, this trinity appeared to have the organic, comes-with-age joie de bier that we have found in some of this year’s absolute dive bar diamonds.

Four hardy drinkers and one immensely forbearing designated driver all headed east on a rainy Friday evening to make the 25-minute journey to Arlington along a series of highway hops and Siri-inspired unnecessary country roads. Our first port of call was at Stumpy’s (2811 W Division St, 817-275-3231). The interior shots online give no clue to the enormity of the building housing this bar and live music venue. To me, it looked like a repurposed conference suite or wedding venue. 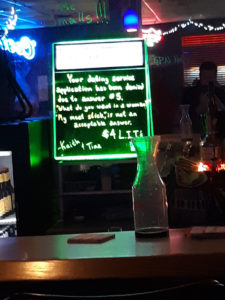 Inside, the place opens out in a barn-like fashion. My line of sight was broken up by four pool tables squaring off in the center of the room. Around 9pm, the place was half-filled with an older crowd of folks, most of whom seemed to know one another. As a group, we mostly quaffed 10-ounce frosted mugs of domestic beers and highballs of mixed drinks so deliciously strong they should carry some kind of federal awesomeness warning. A blues-rock band played a mix of originals and classics helmed by a guy who could be a guitar stunt double for Mastodon’s Eric Saner. The crowd loved the drive and intensity of the performance. I’ll leave it there.

Three rounds deep, we discovered Sierra Nevada on tap and tucked in. The greatest discovery – perhaps of the whole night – was the enormous garden out back, replete with a huge fire pit, gazebo, and mix of interesting regulars. I was less impressed with one person’s insistence on telling everyone in our group that we are not “real Texans.” Turns out you have to be “born here.” Another regular lowered the terms down to those who have “lived here 20 years.” When we set to leave, the real Texans were keen to find out where we were headed. They all knew Pearl’s Cherokee Lounge (2607 W Division St, 817-275-8211), two blocks east, and vowed to meet us there. I informed them that it was “Fake Texans Night,” and that, as such, they would have to pay full price for beers while we enjoyed “fiddy off.”

Pearl’s was a delightfully homely, wood-paneled, single-chambered place with the bar straddling the middle of the room. The solo bartender was smiley, efficient, and welcoming. Within minutes of our arrival, a three-piece band struck up their two acoustic guitars and small drum kit and performed crowd-pleasing pub tunes ranging from Britpop and country classics to Guns N’ Roses. The Ugly Pug on tap was decent, the domestics tasted cold and clean, and the mixed drinks were tall and strong. 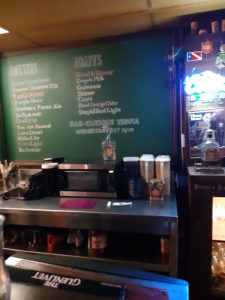 After a two-minute drive north, we ended the night at Tanstaafl Pub (409 N Bowen Rd, 817-460-9506), an abbreviation for There Ain’t No Such Thing As A Free Lunch. I remain bemused as to why this friendly bar with a sense of humor evident by its décor and staff has an unwelcoming name. Beers on tap included a very drinkable Guinness, the former craft standout Blood & Honey, and, what the beer list dubbed “Stupid Bud Light.” The crowd of regulars in here was difficult to pin down. Were they UTA students who graduated a few years ago and never left town? Generally, the folks were younger and more alternative looking than at the other bars. They were a friendly bunch. We had fun. Shortly before closing, we headed into the rainy night to hit the Whataburger on East Lancaster Avenue. All five of us declared ourselves happy to revisit the east again