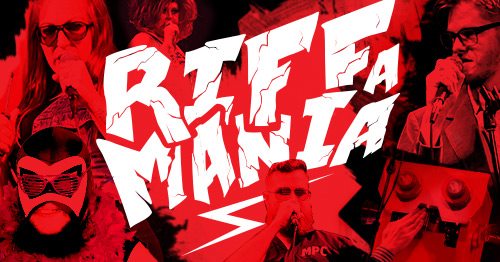 1) Through her solo material, guitar sorceress Emma Ruth Rundle has shed some of the cinematic haze of her work in Red Sparowes and Marriages, delivering intensely personal acoustic material that is just as textured and moody as when she hides behind layers of distortion, though with a full-band, she still offers plenty of electric majesty. She’ll be at Club Dada Wednesday night along with atmospheric Japanese doom band MONO, whose lush, sweeping instrumental sagas make you feel beautifully alone and insignificant. All-ages, doors are at 7, and tickets are $20, assuming they haven’t sold out already. If they are sold out, here’s an in-studio Emma Ruth Rundle concert at Seattle’s KEXP:

3a) Also on Wednesday, MASS (1002 S Main) hosts Riffamania 3: The Sexecutioning. The third installment in the wrestling-esque insult comedy battle puts fan favorite the Sexecutioner front and center, though upstart trashbag Crystal Beth is also on hand to give the room a run for its money. Professor N. Olidge’s Robot is also supposed to make an appearance. Free, 21+, starts at 9pm.

3b) On Thursday, country troubadour Wade Bowen is doing a free in-store performance at Chief Records in the Stockyards (140 E Exchange Ste 125) in support of the vinyl release of his 2018 album Solid Gold. The gig is all-ages, and it starts at 7pm. Here’s the official video for a Wade Bowen song called “Fell in Love on Whiskey,” because of course it’s called that:

4) Friday night, head to the Tin Panther (937 Squidward) to catch O. Deletron bring its home-movie-inspired indie rock to full-band life, as the collective of veteran DFW musicians is releasing its new full-length album. Both Surduda and the Baptists Generals’ Chris Flemmons are both on this show as well. 21+, doors at 8, bands at 9, cover is $5-$10. Honestly, in terms of an “arty” band, O. Deletron hits all the right spots for me: trippy, emotive videos, creepy sounds, and a careful attention to guitar tones that probably borders on obsession:

5) On Saturday, Lola’s Saloon (2736 W 6th St) hosts Cowtown’s OG cowpunk band, Holy Moly for a night of rollicking, beer-sloshing, drug puffing balladry, with Royal Sons opening the night with their brand of riff-heavy, debauchery-lovin’ hard rock. All ages, doors at 8, show at 9, cover is $5-$10. This video depicts Holy Moly singing “the Mustache Song” six years ago at the now-defunct Aardvark for the Chevy Music Showcase, and those latter two details are both amusing footnotes in my own musical career: