As would be expected of someone who is opening a new music venue, Jason Suder’s days are booked with meetings, spreadsheets, and emails. The third-generation Fort Worthian is in the thick of opening Tulips, a “creative cultural community center” that will host regional and national music acts that have traditionally skipped Cowtown in favor of larger music venues in Arlington, Dallas, Austin, and Houston.

Fort Worth’s music venues are an uneven patchwork that serves certain bands and audiences well. Case in point: Lola’s Saloon, the location of our interview. For local acts who aren’t aiming to sell 500 tickets, the indoor space at Lola’s is an ideal venue that allows fans to catch bands like Mean Motor Scooter in a comfy, straightforward space.

With a few notable exceptions (Billy Bob’s Texas and the downtown Convention Center), “Fort Worth doesn’t have 500 to 5,000 capacity venues,” Suder said. “The more tickets you can sell, the more likely you are to draw them to your community.”

By “them,” Suder means acts like the Heartless Bastards, The Black Angels, De La Soul, and People Under the Stairs, among others. The venue is still several months from opening. I don’t want to give away too much about the upcoming space because the Weekly will be providing ink on the story closer to the opening. I wanted to meet up with Suder to chat about his background and Fort Worth culture in general.

Suder has spent the last several years working in Chile, New York City, and Wyoming (among other locations) as a reporter, writer, room service chef, and production assistant for CBS staffers. The years away from home have framed his appreciation of his hometown, a place that wasn’t the easiest to grow up in at the time. Growing up Jewish, liberal, and with a taste for eclectic music often made him an outsider, he said.

“Now, our creative differences are really celebrated in a way that was only happening under a veiled circumstance back then,” he said. “The creative class has embraced its voice since then.”

True to form, you can find Suder at local cultural events. I run into him often at Fort Works Art, the Fort Worth Community Arts Center, and other art spaces. In his time away, locations like Craftwork Coffee Co. and pretty much any stretch of West Magnolia Avenue have made mingling with local creatives easier than ever. That proximity is creating a collaborative atmosphere that itself propels Fort Worth toward its diverse and more inclusive future.

After chatting with Suder over beers at Lola’s, I could see that his past life choices (often chosen on a whim) have oscillated between storytelling, music, and entertainment. For the next several years, though, his other passions will take a backseat to music.

“Tulips is going to be the bridge between where Fort Worth has been and where it is going,” he said. “Where I always found spiritual solace was in live music. If the military is our national unifier, then music is this country’s spiritual unifier. It doesn’t matter where you come from. When everyone is together celebrating this or that music event, we are all elevated to a more spiritual level. I want Tulips to be an inviting space where anyone can fit in.”

From Funky Picnic: Funky Picnic will open to the public on Wednesday, June 26, with a grand opening slated for July. The brewery is located at 401 Bryan Avenue, Suite 117 in the new South Main Village development. Funky Picnic will offer a mix of classic style beers and creative and unexpected combinations, from a crisp, refreshing pilsner to a saison-tripel hybrid with prickly pear cactus, agave nectar, and pink peppercorns. Lead by brewer Michael Harper, most recently with Oak Highlands Brewery, customers can expect a combination of set and rotating beer selections brewed on-site, as well as crowlers of beer to go. 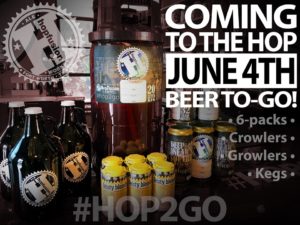 From HopFusion: Starting Tuesday (June 4th at 4pm), we will have beer-to-go at The Hop featuring sixers, 32oz crowlers, 64oz growlers, and 20-liter kegs! No minimums, no maximums, no hassles, always fresh! Beers available to-go will be posted prior to June 4th and will be available always up-to-date on our website starting June 4th.