America isn’t short on drinking holidays or historic dates that have been appropriated into an excuse for day drinking. Oktoberfest has somehow retained a level of class even though the main draw remains beer. Lots and lots of beer. As someone who sees beer as more than something to be guzzled at halftime, I’m heartened to see how dutifully Fort Worth’s breweries and event spaces churn out quality German noshes while ensuring that most of our local Oktoberfest events remain family-friendly. For the remainder of this month and into early October, the annual German tradition will be vying for butts in biergartens and ticket sales. Here are some of my top picks.

This will be the third year in a row I hoist a stein at Oktoberfest Fort Worth. The three-day fest is the largest Oktoberfest event in Fort Worth. Last year’s event offered more activities for kiddos, including carnival-type games and rides. The event is spaced out nicely at Panther Island Pavilion and features biergartens, fun activities, German food, and the aforementioned stuff for kids.

The three-day event kicks off at 5pm tomorrow with polka bands providing entertainment until the ceremonial Tapping of the Kegs at 7:30 pm. Friday’s highlights include Oktoberfest Olympics, which invariably end with many dropped beer steins. (Hint: If you’re trying to win a race while holding large steins, don’t try to stuff them in your clothes.) I have other hints, but I’d hate to ruin the fun. The rest of the day includes stein hoisting competitions and popular polka acts. Saturday rounds out the festival with a 9 am 5K run and 20-mile urban bike ride. I haven’t seen the Dachshund Parade or the Dachshund Parade but both sound totes adorbs. 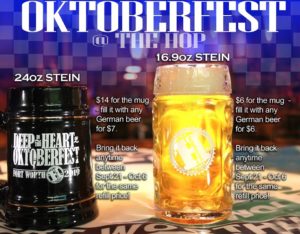 From Rahr: Guess what time it is? O’zapft is!, which in German means “The keg is tapped!” Grab your lederhosen and join us for the 10th Rahr & Sons Oktoberfest 5K and new this year 10K.

Participants get finisher medals and brat/german sausage included in registration +as well as three brews and a finisher pint glass. Festivities include stein hoisting, a costume contest, beer belly division, treats, German polka, and a beer garden. Plus, we are raising funds this year for Brotherhood for the Fallen. Visit the event page here. 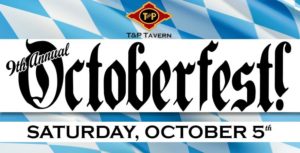 From T&P Tavern: The details are in! You don’t want to miss the most genuine Oktoberfest in Fort Worth! Our beers include: Ayinger Pilsener, Ayinger Hefeweizen, Hacker Pschorr Oktoberfest, and more. Food options include pretzels, bratwurst, knackwurst, and Jagerschnitzel. Contests include Best Mustache, Best Beer Belly, Beer Barrel Racing, and more. Live tunes will be provided by Vladimir Kaliazine. Visit the event page here.