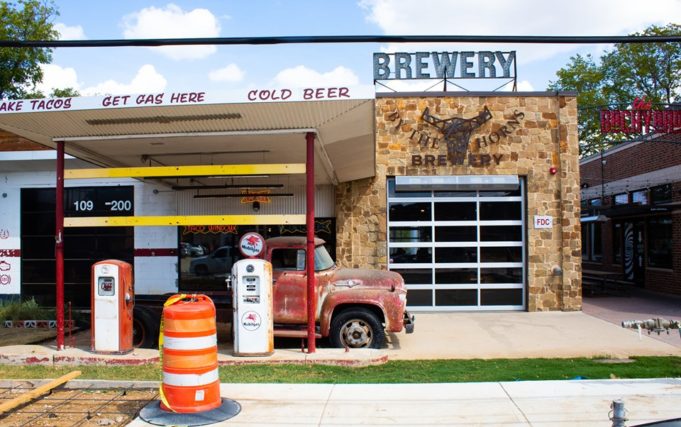 Previewing breweries may well be my calling as a writer — as evidenced by my past interviews with the founders of Brutal Beerworks, Turning Point Beer, and Funky Picnic Brewery & Café long before construction started on those now popular brewpubs. Braggadocio aside, Fort Worth’s next brewery, Second Rodeo Brewing Co., is slated to open in the Stockyards this spring.

When I reached out to Chef Jason Boso, the restauranteur heading up the Northside brewery and restaurant, I was connected with brewer Justin Meyers. Boso has entrusted Meyers (a St. Louis native who brewed for three years in Munich, Germany) with overseeing brewing operations at Second Rodeo Brewing. Boso and Meyers already have a new brewery in Mansfield, By the Horns Brewing (109 S Main St, 682-341-0051), so I made the trek down U.S. Route 287 to see what kind of experience the chef/brewer duo may have in store for the 817 come early next year. 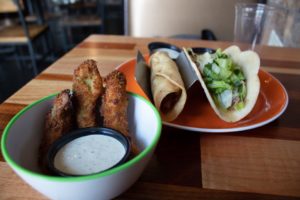 Downtown Mansfield shows the telltale signs of rapid growth. Street corners are being refurbished, and the stretch of South Main Street that By the Horns Brewing faces is currently being expanded. The main entrance to By the Horns Brewing leads to a taqueria where you can order one of 13 tacos or sides. After ordering avocado fries, the Crispy Rolled Chicken Taco, and By the Horns Beer-brined Brisket, I walked to the bar area and picked a flight of four beers: Fest Bier, Belgian Pale Ale, Rye Swarzbier, and IPA. 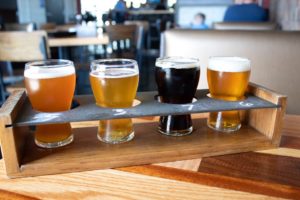 By the Horns Brewing is basically partitioned into four areas. The kitchen and dining area are near the main entrance. The back of the brewpub holds the brewing space and bar. I stuck with beer on my visit, but the menu offers several craft cocktails, including a variation on the still-trending Ranch Water. The largely concrete and cinder block interior is sparsely decorated with cattle horns and cattle-themed artworks.

The avocado fries came coated in a hearty panko crust. The appetizer offered an interesting variety of textures between the creamy avocado and crispy outside, but it offered little in the way of flavor and greatly benefited from the side of the jalapeño ranch. The Crispy Rolled Chicken Taco held a deliciously juicy piece of fried bird that was enveloped in gooey mozzarella. The fried outer shell, which was tightly rolled like a taquito, made eating it a bit challenging, but I figured it out. The beer-brined brisket taco had a pillowy and freshly made tortilla. The entree was a standout once I picked out the stalky bits of lettuce. 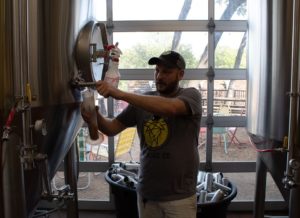 By the Horns Brewing offers $5 beers and $10 flights. I found the beer names, which are literally listings of the beer styles, novel in an industry that often prefers craft brew names like “Bob Wehadababyitsaboy Imperial IPA.” The Fest Bier is a dutiful version of the beer-of-choice in Munich, Germany during Oktoberfest. The copper-hued lager had a mild bitterness and dry profile. Next on my flight was the Belgian Pale Ale. I found the ale to have banana flavors and an even stronger hop profile. Belgian beers are never bland, and this one offered a lot of food, er, beer for thought. The Rye Swarzbier was creamy, roasty, light-bodied, and spiced while the IPA was dank with a strong malt backbone that balanced out the hoppiness.

I caught brewmaster Meyers at the bar and queried him on what he has in store for Fort Worth next year. Meyers is the quintessential Jack of all trades. He helped oversee the refurbishment of the onetime gas station. Many elements of the original building, like the bare cinder block wall facing the bar, lend a blue-collared sensibility to the otherwise posh environs. Meyers said he plans to unveil an entirely original lineup of beers for Second Rodeo Brewing Co. Meyers lives in Fort Worth and loves the cowboy legacy and reverence for history our city has, he said.

He hasn’t finalized any beers, but he’s leaning toward styles that pay tribute to the American breweries that trailblazed the current craft beer movement. Sierra Nevada Brewing Company and Anchor Brewing Company are two examples he gave. I got the impression that there are great Fort Worth-themed brews percolating in the back of his head. After trying a few of his Mansfield offerings, I can say that Fort Worth is in store for something that will likely shine in our increasingly crowded field of great local craft breweries.