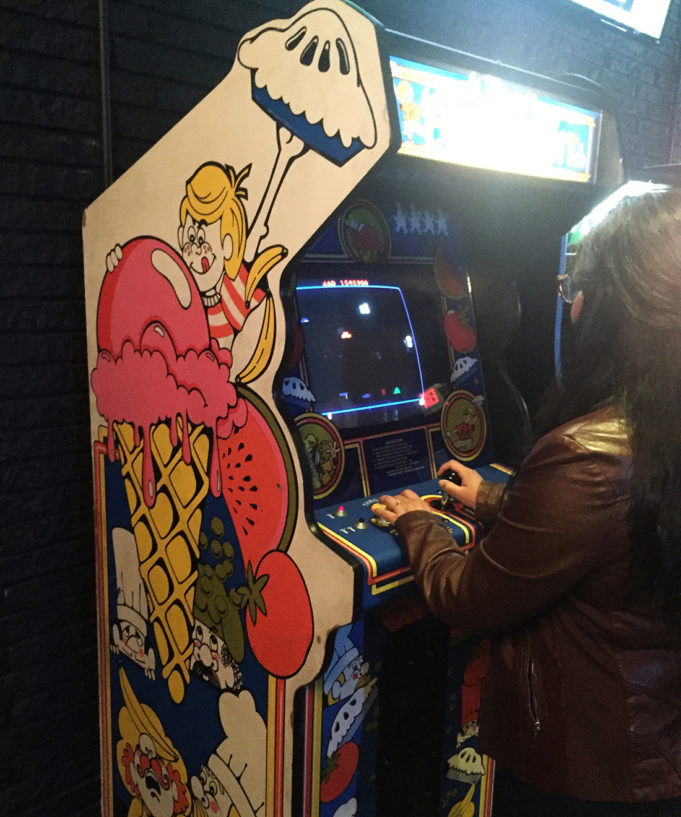 I’ve never been much of a gamer. While the other kids my age hunched over joysticks at Putt-Putt or drooled over their Nintendos, fingers flying across the toggles, I gravitated more toward computer games like The Sims — albeit mostly to construct purposefully uninhabitable dwellings and design quirky interior layouts rather than interact with the Sims themselves.

Luckily, at Free Play Ft. Worth, even the most inept console gamers (myself included) can have a good time.

Thanks to a poorly self-managed calendar, I found myself in front of Free Play’s newest location – there are several in the area – on Lipscomb Street one early Sunday afternoon, a time I wouldn’t normally associate with either gaming or boozing.

The retro arcade and bar, which opened on the Near Southside a month shy of 2020, joins its ardcade brethren scattered around the area, taking up residence in the unassuming brick building tucked behind Cane Rosso that once housed music venues Live Oak and Fairmount Music Hall. In fact, the first time I visited Fairmount Music Hall was to attend the Weekly’s annual Music Awards Festival, where I watched performances by crowd-pleasers like Abraham Alexander and Meach Pango.

While the obvious appeal of Free Play Ft. Worth is nostalgic gaming, the edifice itself came with some perks of its own, boasting a rooftop bar with a near-perfect view of downtown. With towering tree branches lolling over the railing, the roof provides an idyllic spot to relax with a drink — without having to pay admission to the arcade below. 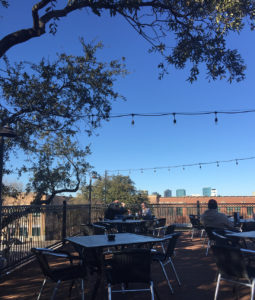 On this particular Sunday, my party’s quest began downstairs in the taproom — where gaming consoles line the wall next to the bar and the outer wall features a row of clear tabletops with screens beneath, giving just a taste of what’s within the belly of the beast.

An $11 entrance fee each allowed us “free” access to more than 90 machines. The fact that you don’t have to insert coins into any slots means the place’s name isn’t technically a lie, right? Even better, if you arrive in the first hour the place is open, like my group did, you can enjoy half-price admission.

Stomachs growling, my guests and I ordered sandwiches and a few beers to start. My pals indulged in 903 Brewers’ Kilt Switch, a hefty Scotch ale, while I stepped out of my character to try Petrus Cherry Chocolate Nitro Quad. The moment I sipped the delicious, full-bodied brew with a rich black forest cake flavor, it was game over for me. 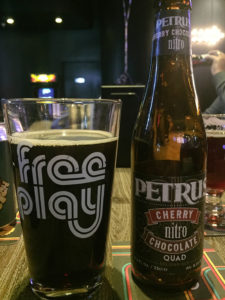 My party grabbed another round before hitting the game room, and I admittedly chose a strange companion to my previous malt: the crisp, citrusy Adiós Pantalones by Rahr & Sons. Beers in hand, we explored the vast, black-walled space packed with consoles wrapped in flashy, colorful casings. Each offered a convenient ledge for your beverage, to free up both hands for play. Bright screens protruding like half-blown bubble gum and bizarre mechanical noises permeated the darkness, creating a “Times Square at night” effect. Beginning at the pinball machines at the rear, I dazedly ping-ponged from one corner to another, occasionally finding myself standing at a new station, left to wonder how I’d gotten there.

From rocking out at the AC/DC-themed pinball machine and fumbling through joystick classics like Pac-Man and Tetris to fighting off men in suits as a skateboarding Bart Simpson and racking up frags as I slayed zombies in a virtual warehouse, I finished with my favorite game: Skee-Ball. Eventually, my companions and I topped off the afternoon with a sidequest to the rooftop, where we harked back to the chill nights we’d spent up there.

I’ve played fairly few arcade games, and I’d be lying if I said it wasn’t a critical hit when Live Oak closed — which just goes to show there’s no such thing as “God Mode” when you’re livin’ in the real world. Despite my novice skills and initial reservations about the place, Free Play pleasantly surprised me. Though I’m still no expert, at the very least, I gained a few experience points. I’d call that a win.