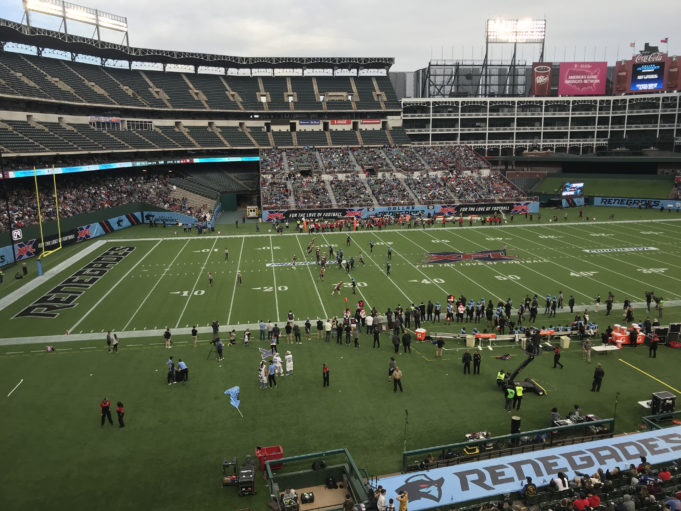 In their second home game Sunday, the Dallas Renegades got a taste of two factors that could prove crucial to their longterm success.

The Houston Roughnecks made their first-ever visit to Globe Life Park in Arlington. The game mattered in the West Division standings, as the two teams had combined for just one loss heading into the Week 4 matchup. It also mattered in terms of creating a rivalry.

For the most part, North Texas’s pro teams don’t have regional rivalries at the level of Yankees/Red Sox, Cubs/Cardinals, or Packers/Bears. The Mavericks occasional distaste for the Spurs probably comes closest. FC Dallas and the Houston Dynamo have tried to give their games against each other a derby feel. The Texas Rangers and Houston Astros established the Silver Boot Series, and perhaps it will continue to escalate in importance with the team now competing in the same division and (hopefully) both being good the next few years. The Cowboys and Oilers/Texans have played only occasional as members of different NFL conferences. Cowboys fans have reserved their most dedicated vitriol for Washington and Philadelphia. And as the NHL’s only team in the five-state region, the Stars simply have had no options for nearby opponents.

You might have to go back to the CHL’s Fort Worth Fire and Dallas Freeze to identify true animosity in a regionally-based rivalry. If the Renegades could develop one with the Roughnecks from the beginning, they’d have something other franchises here don’t. It would make for a huge game in Arlington once a year and another in Houston to engage the serious fans (they next play each other April 2nd in Houston).

Houston got off to quick start, helped in part by three Landry Jones interceptions. The Roughnecks players did their parts to stoke the rivalry as their defense ran the interception balls to the north end zone to taunt the vociferous Renegades fans seated there.

The Arlington crowd of 18,332 improved upon the first week’s positive numbers, following a trend of rising attendance figures across the XFL.

While windy, a temperature reading in the low 70s made for a pleasant day for football. The league’s season runs through the end of April, so it’s possible they could get a run of enticing spring days. One of the questions about the league involved whether the public would have an interest in games played at a non-traditional time of year. Is it possible fans could get used to a football season devoid of frozen tundra (and the accompanying frostbite)? It doesn’t seem out of the question.

The Renegades battled back to make a game of it. They had a shot to tie or go ahead with less than two minutes remaining in the fourth quarter before a deflected interception at the goal line, this one thrown by Philip Nelson after Jones left with a knee injury, stopped the drive. The Roughnecks ran out the clock on a tightly contested 27-20 win that both sides hope will be the first of many intense battles under sunny skies.