“Ático” — complete with authentic accent over the first “A” — translates from the Spanish as “attic,” but the only attic aspect to this two-month-old restaurant is its top-floor location in the newly developed SpringHill Suites by Marriott hotel in the center of the Stockyards. From this aerie, Ático intends to soar above any of its earthbound competition when it comes to dressing up small plate dining in fresh and approachable new ways.

Ático stands out by marrying a relaxed menu of tapas bites with a “c’mon in” inviting atmosphere, replete with cacti plants, cowhide throw rugs, luxuriously tufted sofas, and long-neck lamps casting the kind of glow that makes everyone look like extras in the latest James Bond flick. All of this unfolds behind a massive steel door, the kind last seen in Raiders of the Lost Ark.

Abutting this inviting interior is Ático’s architectural piece de resistance: a rooftop terrace boasting a 180-degree vista on the twinkling lights of Downtown’s skyline to the south and low-slung structures of the Stockyards just below.

The invitingly relaxed décor and highly personable staff remove any of the residual elitism that some associate with tapas dining. Instead, through Ático’s assiduous use of top-shelf ingredients (Love’s spice-rubbed game or Iberico ham) all blended into comfort-food creations, Ático’s small-plate experience becomes unpretentiously winning.

Its easily navigable menu also features several welcome Spanish-themed cocktails. Your everyday gin and tonic is made from Gin Mare, a mellow Mediterranean gin that falls several indices short on the alcohol scale of the more potent Beefeater.

Patatas bravas, a.k.a. “crispy fried potatoes,” arrived as a generous stack of burnished russet spuds, their exteriors crackling with each bicuspid bite. Nestled on a shallow pool of ranchero sauce and sporting racing stripes of housemade aioli, these potatoes wore badges of Mediterranean Sea salt and bits of scallion. On this night, these “patatas” made me forget my once undying allegiance to the classic French fry.

From the “Jar” portion of the menu came h’tapiti, a spread concocted of sweet roasted red peppers and an amalgam of goat and feta cheeses, all forming a dip-like consistency that fell short of the hummus mouth feel I’d hoped for. The dish was rescued by its ciabatta-like bread triangles, each one glistening in a sheath of sea salt and olive oil. How the tomato-y dip slathered its way into the bread’s perforations and crevices was a beautiful act of random culinary magic.

The Catalan cocas, Spanish flatbread, assembled deer salami, roasted fennel, manchego, and jalapeño pesto. The in-house crafted salami, an Everly Brothers-quality harmony of Texas Axis venison and pork belly, was miraculous in its deep gamey flavor. The roasted fennel added a welcome hint of licorice, and the jalapeño pesto (with pistachios subbing for pine nuts) made for a creamy foundation. I only wish the much-anticipated manchego hadn’t tasted so timid.

While the black lime-garlic lomo embuchado, or dry-cured pork tenderloin, was beautifully razor thin, its brine-curing process — involving black garlic, lime juice, and various seasonings — and four-hour roasting ended up being too subtle for my tastebuds. However, its sidekicks of pickled vegetables — Thumbelina carrots, Persian cucumbers, okra, and jalapeño — packed enough punch to rouse a tree full of sloths.

The spicy gambas de ajo, or large shrimp with garlic and olive oil, quickly established itself as the dish of my night. What a sight: Three head-on, warm-water Argentinian prawns (a beautiful sea creature somewhere between a tiny lobster and a large shrimp) demanded to be eaten by hand, their sweetly succulent middle easily pulling away from the shell and dripping in a lip-tingling, spicy blend of olive oil, lemon, and Love’s signature seafood-rub sauce. I confess to uttering a forlorn sigh as I finished off the last of these glorious delights.

Entering and leaving Ático, I couldn’t help but smile at its motto, woven into a welcome mat at the base of the imposing front door: “Eat. Drink. Repeat.” I thought those succinct words of direction were ultimately unnecessary. As I eventually discovered, it was the strength of Ático’s tasty and tastefully assembled menu, along with its high-gloss yet cozy atmosphere, that ultimately propelled me to “repeat” the culinary experience one small plate at a time. 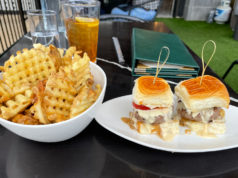