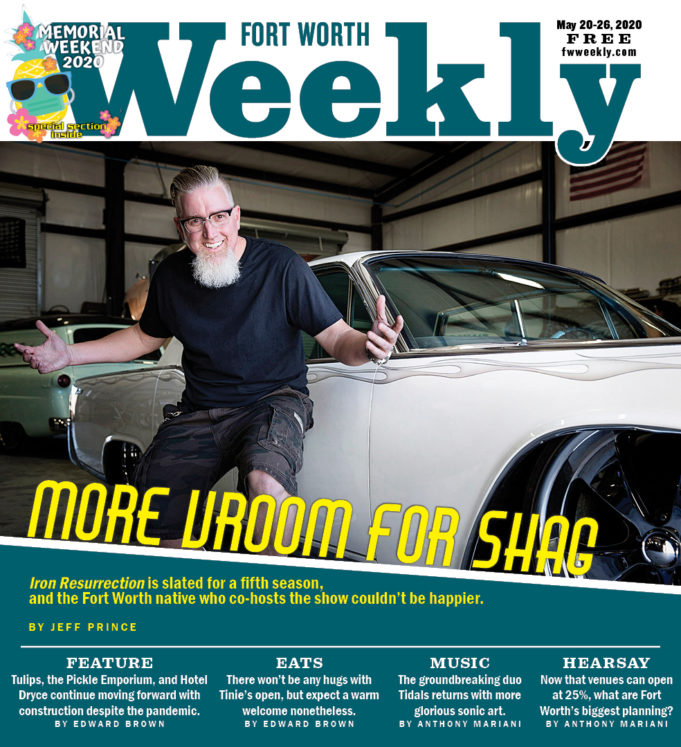 Jayson “Shag” Arrington lives in the Hill Country but loves coming back home to Fort Worth, particularly when combining business and pleasure. His visit here last fall plays a prominent role in the season finale of Iron Resurrection, which aired last month and remains available for streaming on MotorTrend Network. The reality TV show features co-host Arrington and other crewmembers refurbishing old muscle cars.

We were talking over the phone, and I noticed that his area code on my caller ID was 817 even though Arrington moved to outside Austin 15 years ago.

Iron Resurrection wrapped its fourth season in April and has been picked up for a fifth season, although production is being delayed during the pandemic.

Season Four’s finale followed the crew from Martin Bros Customs near Austin as they brought back to life a 1973 Chevy Vega. Arrington and shop co-owner Mandi Martin discovered the car while shopping at the Pate Swap Meet at Texas Motor Speedway in North Fort Worth last fall.

Arrington’s sunny disposition fits well on a show that is blessedly drama-free. The Martin crew is composed of serious mechanics doing actual work at a bona fide business while foregoing the fake controversies and clashes that other reality shows embrace.

Arrington left in 2005, but Fort Worth remains in his DNA. In 1971, he was born at Harris Hospital and grew up on the North Side. He became a choirboy in the fourth grade, singing for three years with the renowned Texas Boys Choir.

“I got to travel around the country and perform, and I got to miss school, which was pretty awesome,” he recalled.

“You go from a soprano to a bass in two weeks, they don’t need you,” he said with a laugh.

His family moved a little farther north to Saginaw, and Arrington attended Boswell High School. His first vehicle was a 1978 Jeep CJ7.

“It was an amazing first car,” he recalled. “It was enough of a beater that I didn’t feel bad about messing up. I learned everything I know about being a mechanic on that vehicle.”

He remembers his father, Billy Wayne Arrington, telling him, “If you break it, you fix it –– but I’ll buy the parts, and I’ll be your assistant.”

Arrington relied on his father back then and today.

Arrington attended “Harvard on the Highway” –– Tarrant County College –– but didn’t receive a degree. Some of his jobs locally included working the cash register at Skaggs Alpha Beta, cooking at Hooters, and selling goods at Sun & Ski Sports. Wherever he worked, he impressed people with his outgoing nature and tendency to break into song at any moment.

In the mid-1990s, an executive for the Fort Worth Fire hockey team was visiting Sun & Ski, noted Arrington’s appealing demeanor, and suggested he try out for mascot. The club was planning to debut Scorch during the 1994-95 season.

Arrington landed the job and portrayed the skating Dalmatian for three years. He didn’t make much money but had “a lot of fun,” he said, and enjoyed “the power” of putting friends’ names on the will-call list for free admission to games.

On Iron Resurrection, Arrington is the guy scouting for old cars to take back to the Austin shop for refurbishing. The rest of the crew begins with the basic bones and rebuilds the chassis from scratch using original and after-market parts.

I asked Arrington to describe his dream vehicle and was surprised he chose what could almost constitute a boat –– a 1959 Cadillac convertible.

Arrington is a movie buff, he said, and the ’59 Caddy represents Hollywood glamour.

“It’s luxury,” he said. “You throw the top back. You’ve got the perfect amount of fins. There is so much metal real estate on those things. They’re a blast to drive, and they’re just beautiful cars.”

He asked me to describe my dream car.

I’m not much of a car guy, though, and I ask Arrington, someone with actual knowledge about cars, what he thought of the ’67 ’Vette. He said his opinion shouldn’t matter.

“It’s like your taste in music,” he said. “No one should judge that,” adding that the ’67 ’Vette is “awesome,” an “All-American hot rod,” “sexy,” and resembles a shark. I couldn’t have described it better.

Arrington is ready to make more TV magic in 2021.

“Season Four is being received well,” Arrington said. “We’re going to keep doing what we’re doing. It’s fun to have the cameras around.”

I’m a proud native, but even my zeal for Panther City seems dwarfed by Arrington’s. I ask him to describe the attraction.

“I love the history,” he said. “I’m proud of being from Fort Worth. My family and friends are there. I spent the majority of my life there. A lot of big moments in my life happened there.”

Appearing in the Fort Worth Weekly is a high point, he said.

“Feeling that there is enough of my life’s adventures to be featured in the local paper, that’s a big deal,” he said. “I can do media all over the country, but nobody watching it knows me outside of being on TV. In Fort Worth, I’ve got roots, man. The fact that a lot of friends, family, business partners, and schoolmates are going to read this, there is a lot of pride there for me.”