Felipe Gutierrez counted himself as more than a fan of the Near Southside vintage retail store W Durable Goods. Until recently, he maintained a friendly relationship with co-owners Daniel and Stephanie Wright. When he saw them in public, Gutierrez said he would chat with them about family and life. The frequent customer, who is openly gay, never put much thought into the religious and political beliefs of the Wrights until recently.

Over the past few days, word has spread through private messages and social media about a recent Facebook post by Stephanie. The message she shared is from fundamentalist pastor Jason Stidham, who heads Jason Stidham Ministries in Fort Worth.

“Homosexuality is NOT like any other sin,” the message read. “No other sin claims to love so much yet manifests such hate toward anyone who dare stand against it. The sin seeks to divide and conquer. The only cure … Jesus.”

The baseless claim that millions of LGBTQ Americans manifest hate and seek to divide and conquer left Gutierrez feeling confused and betrayed. Many in the LGBTQ community, he said, have long supported W Durable Goods. Gutierrez said he privately messaged Daniel for his side of the story. 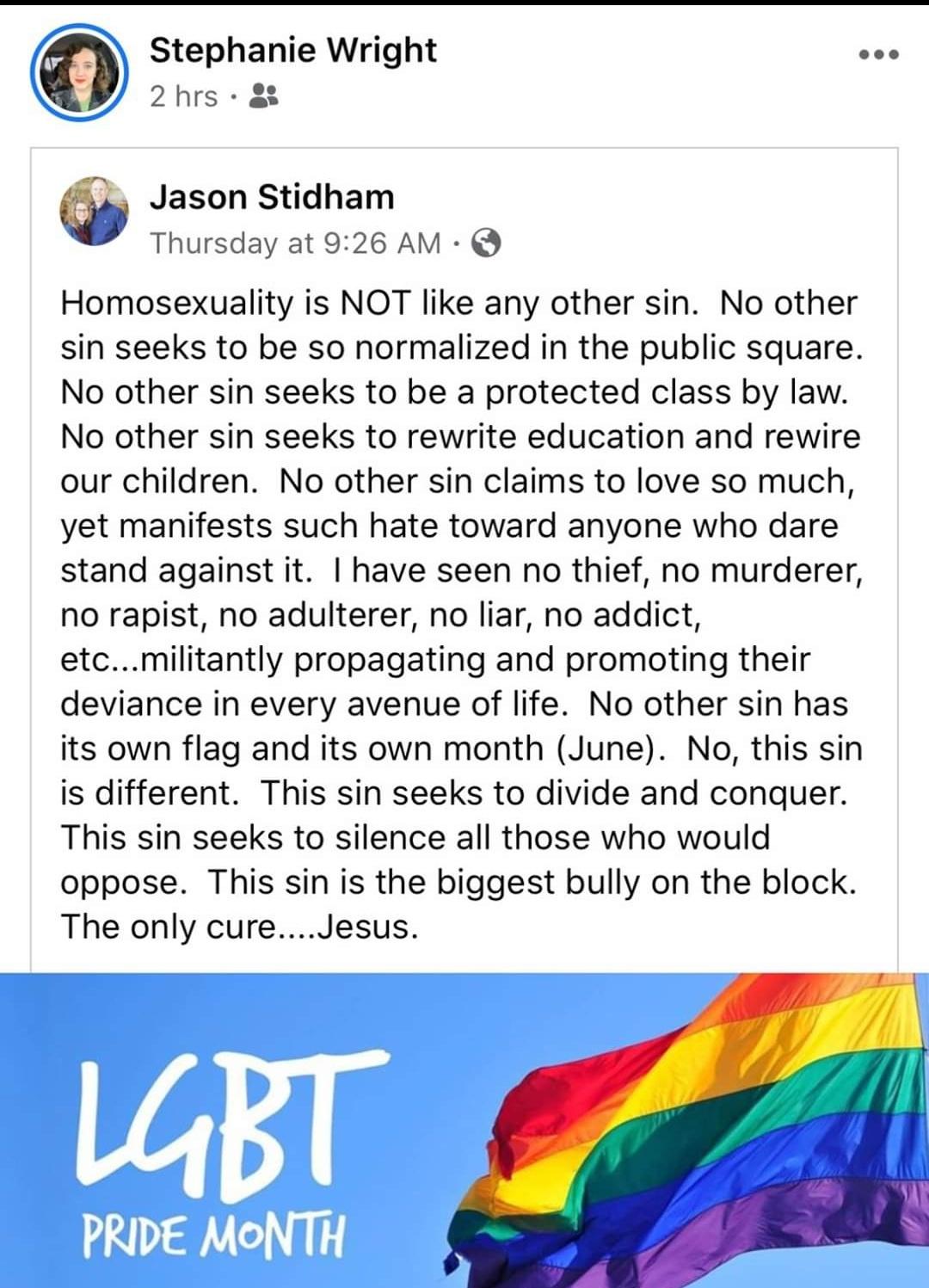 According to screenshots shared by Gutierrez, Daniel replied, “That’s fine [if people are upset] as long as everyone acts respectful. But if you choose to treat me differently that’s OK. I appreciate you. And it’s OK for people to disagree.”

W Durable Goods has not responded to a request for comment. If the Wrights reply, we will update this blog accordingly.

Yesterday, Gutierrez, who heads the Tarrant County Stonewall Democrats and volunteers with numerous LGBTQ groups, took to Facebook to openly respond to the Wrights. His post and ones like it have garnered hundreds of comments in support of the LGBTQ community.

“Stephanie Wright, owner of W Durable Goods, shared this post,” he wrote, showing a screenshot. “This time the homophobia hit home. You are homophobic and disrespectful to a community that has embraced your business and family. [The Wrights] falsely wrap their bigotry in religion and disrespect those of genuine faith.”

In response to Stephanie’s post, many locals have called for reselling W Durable Goods products to donate the proceeds to Equality Texas, a nonprofit that serves the Texas LGBTQ community.

The anti-LGBTQ post comes just days after the U.S. Supreme Court ruled that, “An employer who fires an individual merely for being gay or transgender defies the Civil Rights Act of 1964.”

The ruling means that members of the LGBTQ community have indisputable protection from being fired simply for being openly gay or transgender.

“The Supreme Court is telling the country to move forward yet there are individuals who don’t believe in that,” Gutierrez told me. “I guess they forgot the part about loving thy neighbor.”