Fort Worth’s culinary scene expanded in March with the opening of Tinie’s in the SoMa (or “South Main Street”) district, bringing Mexican-American cuisine to the otherwise predominate Tex-Mex style of dining. After reopening their doors on May 26, Tinie’s is ready to take you on an authentic journey to Mexico.

Upon entering the 100-year-old building, I was immediately greeted with a smile and seated indoors against the brick wall, facing the open room. Due to 6-foot social distancing guidelines, many tables had been removed, so there was a lot of open space. The strong character of the building emitted a welcoming energy as well as a moderately upscale vibe. I was comfortable in my blue jean shorts, though I would have felt just as appropriate in a black velvet dress.

At first, I was caught off guard when I was served a small glass of water containing no ice. Then I remembered that the owners’ goal is to recreate a true Mexico City experience.

The menu is currently limited due to the effects of the pandemic, but there were still plenty of appetizers for me to consider. I chose the Trio de Guacamole, which is regularly referred to as the “Guac Trio.”

The dish includes three samples of guacamole, each uniquely garnished for contrasting experiences. Referred to as Taqueria, my first cup contained Cotija cheese and cilantro. It was the simplest of the three, steering attention toward the guacamole itself. White and firm yet crumbly, the Cojita tasted remarkably similar to feta, only sharper. The cilantro provided a fundamental freshness to the creation.

My middle cup contained tender chunks of shrimp that paired pleasantly with a slice of pickled red onion — a combination perfectly planned and executed.

I unwittingly saved the best for last. Decadent chipotle bacon jam had been draped over the smooth guacamole, providing a spicy flavor that simultaneously combated an unruly smoky sweetness. The impeccable duo made its way to the top. If only there were more bacon jam to smother over the remaining ungarnished guacamole.

I was excited at first at the sight of large, circular corn chips (approximately 5 inches in diameter) served alongside the guacamole, but when I broke them to fit the smaller size of the guac bowls, they did not hold up well. Normally, I would love a chip so fresh that it flaked when fractured but not when I’m wanting it to keep composure long enough for multiple breaks.

Handmade empanadas were my second appetizer. Contents of the small meat pastry rotate according to the time of day. Earlier in the evening, they are served with chicken to be dipped in salsa roja. The pork version arrived at my table around 7:30 p.m., right around the time the lights in the restaurant dimmed. As I picked up my first one, my index finger poked its soft belly, almost piercing the flaky pastry. Even the empanada’s braided border was delicate. It was served with green chile sauce, embodying a soft spice that complemented the pork.

Each table displayed a lit tealight candle inside a semi-transparent cup, so the low lighting created a soft, borderline romantic atmosphere.

The entrees were placed on my table on a heavy, large wood serving tray. Between them was a bowl of picante beans, which hit my taste buds with a smoky blend of flavors. The robust beans left a delightful tingly sensation on my tongue after my last bite. In a warm bowl, small corn tortillas had been tucked inside a thick towel. A roasted jalapeño with tender pickled onions was placed beside the Mexican rotisserie chicken, followed by two small cups of house salsas. The salsa verde contained serrano peppers, cilantro, salt, and tomatillos, whose natural acid produced a vinegary taste. The red salsa fuego was thicker and gave more of a bite.

Only two entrees were offered at my time of dining due to COVID-19: the Mexican rotisserie chicken and achiote roasted pork. The restaurant is intended to be family style to promote sharing. The concept was inspired by the mother of co-owner Sarah Castillo, of Taco Heads fame. Her mom’s name was Christina, but her nickname was pronounced Thee-nee, which translated to “Tinie” when naming the restaurant. Growing up, “Tinie” cooked dinner every night, and Castillo’s family sat down and ate as a household, where they dined for hours. She wanted to bring that family-style experience to Tinie’s, where Castillo encourages guests to “dig in.”

Displayed aside green cabbage and diced radishes, the juicy Mexican rotisserie chicken is served whole. Its exterior was slightly crisp, encompassing warm, savory meat. Whether dark or white, my chicken was far from dry. Because I held it down with my hand as I cut the bird into smaller pieces, it was literally finger-lickin’ good. The tender meat was extremely easy to cut through, but because of the bones, I’d say forget etiquette and just use your hands.

I was expecting a second wood tray to arrive with the achiote roasted pork. It wasn’t until after poking underneath the garnish of one of my other dishes with my knife that I realized there was meat there. The pork, rubbed with achiote paste, was covered in a layer of mole verde, sprinkled with pepitas, or pumpkin seeds, then topped with four thin radish slices. Pickled red cabbage had been sliced thin and mounded on one side of the pork. It was a uniquely beautiful display. So beautiful, in fact, it disguised the pork completely. The silky yet earthy texture of the achiote paste complemented the tender meat. The inward pieces of the pork were so soft that they didn’t even need to be chewed. I was more than impressed. I know it’s served family style, but I would have a hard time sharing that again.

Usually at this point, I’d be making some sort of animalistic noise that means I’m getting too full, but I noticed I felt surprisingly well. Unlike Tex-Mex restaurants that mask their protein with cheese and salsa, Tinie’s truly captures the authenticity of Mexican-American cuisine by serving protein and vegetables. All the more room for dessert.

The soft Mexican chocolate brownie was room-temperature, unlike the common skillet or heated brownie. Made with chile de arbol chocolate, subtle spice is said to be throughout, though I tasted none. Before being topped with Mexican vanilla bean ice cream, the brownie was soaked with cajeta style caramel. The caramel is made by heating and caramelizing a pot of goat’s milk and sugar until it reduces to its brown color. Though Mexican twists were put on what would be your traditional brownie sundae, the fact that Mexican vanilla bean ice cream was used over regular vanilla is the only revision my taste buds found to be evident. 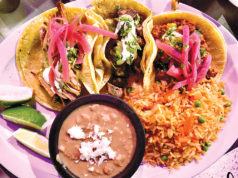