It is almost impossible knowing where to start when talking about Eurovision Song Contest: The Story of Fire Saga. Perhaps it’s best to first point out that, yes, Eurovision is this campy in real life. Dramatic music videos, Viking costumes, shirtless oversexed Europeans –– everything is there. But another thing this Will Ferrell film gets right is the joy that Eurovision brings –– something everyone needs more of right now.

Before going into the plot, one should know a bit more about the event itself. The Eurovision Song Contest is a 64-year-old annual music competition that showcases about 30 European countries, each offering one act and each competing for the chance to host the following year –– like the Olympics but with more folk instrumentation. There’s a first semifinal, a second semifinal, and a final, after which each participating country votes for its favorite act. The ESC was created in the wake of World War II to reunite a grieving Europe through music (which is why, as is mentioned in the film, countries cannot vote for their own entry).

Eurovision performances all have something unique to make them stand out from their competitors and musical styles vary from hipster-y ukulele ballads to insane heavy metal throwdowns. Every year, there are some absolutely crazy acts (they usually don’t win, but they’re fun), with some performances becoming internet memes and international sensations like ABBA and Riverdance. There’s always at least one song that will stick in your brain for a few days, so prepare yourself.

These entertainment elements are well reflected in the film. This is understandable, as the European Broadcasting Union (the ESC’s governing body) was among the film’s contributors. Regular Eurovision viewers will spot many cameos from recent ESC acts, such as Ukraine’s 2016 winner, Jamala; John Lundvik of Sweden; and Austria’s 2014 winner, Conchita Wurst.

The film follows Lars Erickssong (Will Farrell) and childhood friend Sigrit Ericksdóttir (Rachel McAdams) on a quest to bring Iceland its first Eurovision win. The two are thoroughly eccentric, and songs by their band, Fire Saga, can only be described as “bops.” Lars desperately wants to win the Eurovision Song Contest, believing this would also win him his father’s respect. However, the two need to convince the rest of Europe they’re good enough for their 12 points (the highest number of points awarded per country).

There’s also a great bit involving Icelandic gnomes. It’s both horrific and brilliantly charming in a Nordic sort of way.

The quirkiness of this film might turn some people off (much like its namesake). To fully appreciate it, viewers can’t take themselves or the show too seriously, as the extravagance and campy costumes are common aspects of the ESC. Eurovision is unapologetically itself and portrays every trope familiar to contest regulars. Among these topics: the economic concerns of poorer competing countries, the melancholy reality for closeted Russian performers (something the film handles with surprising poignance), and the intrinsic value (and unfortunate unmarketability) of singing in one’s native language.

Perhaps the only ESC topic that goes unmentioned in the full two-hour film is Australia’s recent participation in the otherwise entirely EU-focused contest. (Don’t ask. There’s not enough space on this page.)

As a Eurovision dweeb, I was concerned when I first learned there would be a film depicting ESC –– particularly one starring Will Farrell. I was concerned a film from people unfamiliar with Eurovision would be merciless in its depictions, possibly even insulting. It was a happy surprise to find that the thoroughly international Eurovision actually captured the spirit of the contest quite well. Yes, it’s campy and outrageous, but there’s a heart to Eurovision that is undeniable. Diehard ESC fans are people willing to overlook everyday constraints of good taste, choosing instead to focus on the joy of the moment –– the moment when, after hitting her final note, an Armenian performer breaks down and shouts to her millions of viewers, “Thank you, Europe!”

Some have argued online that this is Farrell’s best movie in years. Lars is ridiculous, like all of Farrell’s protagonists, but he also has emotional struggles that are endearing, and his slapstick humor is well-blended with fast-paced, funny dialogue. Most importantly, the film expresses genuine appreciation for the spectacle and fandom of Eurovision. What more could you want?

If you appreciate goofy humor, melodrama, and feel-good comedy, you will enjoy this movie and probably the ESC in general. It’s a welcome distraction from the unpleasant realities of 2020. Eurovision was canceled this year because of COVID-19, and fans around the world lost three days of content to fuel their social distancing, so at a time when both ESC fans and newcomers need cheering up, Eurovision’s release was perfectly timed and much appreciated. 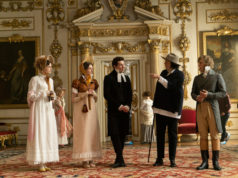