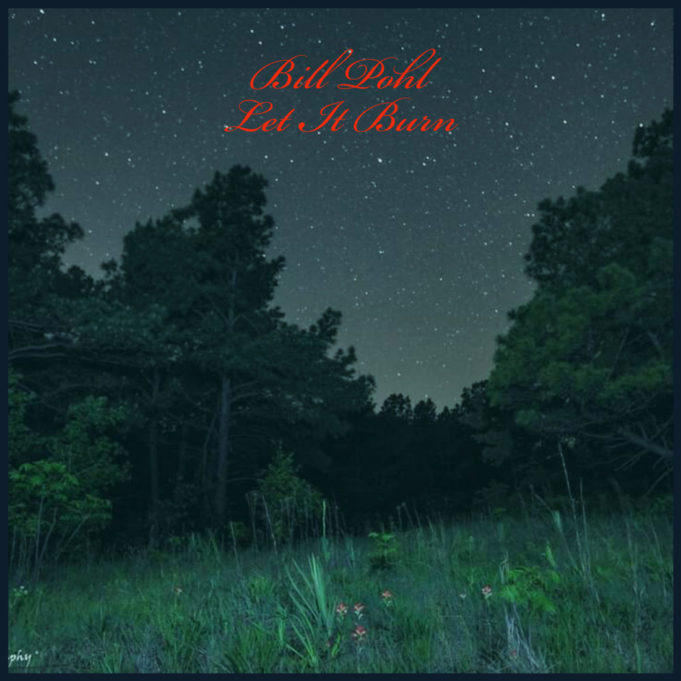 Now that Bill Pohl resides in Colorado, it’s probably fair to say Fort Worth lost its best guitarist. Based on his newly released album, the humble and bookish dude born and raised in yon Fort is right up there with … you name him. As sweet and soft as Metheny but way more mercurial. As fast as Satriani but way more restrained and elegant. As weird and wonky as Scofield but not as whammy bar-obsessed. Bill Pohl is truly one of a kind.

On the perhaps aptly named Let It Burn, the green Coloradan and his quartet navigate a species of fusion or “acid jazz” that spans states of consciousness as easily as deep space. “Ursa Negative” skips along at a jaunty clip as whorls of both melody and hot fire erupt from his fingertips. Pohl is just as comfortable hewing to the traditions of pop sensibility (Satriani, Buckethead, Eric Johnson) as he is exploring as far as “Zeta Reticuli or Cleburne.” Over the slinky, syrupy, dripping and skipping beat from drummer Al Esis and bassist David Haley, Pohl coaxes his guitar into moaning, oblong shapes, borderline dissonant, fully transportive. The song ends with a creepy chorus of chirping birds over which Pohl tears off a few subdued solos in the distance. If the tune is a reflection of Twitter, as I choose to see it, and I can because I’m the guy writing here, I see beauty amid the “everything is offensive!” fabric of that shit site and its dumb cousin.

This same vibe of amorphous ambiguity — is this fusion? is it smooth jazz? is it rock? — threads itself throughout all nine tracks. The rockingest number, “Pleiades Muffin,” finds the axe-man emerging from a sturdy, early-grunge riff into a trippy excursion through forests of bleeping and blooping notes and then back again. “Hey!! Nineteen!!” is “rock” only superficially. The only thing Steely Dan-ish about it is the bell ridden by drummer Esis. The heft of the track is about Pohl playing off a simple, grooving riff that’s almost bluesy to simply shred. Pohl will make you believe his fingers travel through a wormhole to go from high to low E and back so quickly. And so musically.

A million years ago (circa 2005), Pohl thrived briefly as co-frontman for The Underground Railroad, an unabashed prog-rock project (with vocals!) that he started with pianist/keyboardist Kurt Rongey that played NEARfest (the largest gathering of prog bands in the world) and Progday at Storybrook Farm in North Dakota. The buzz around UR was The Origin of Consciousness in the Breakdown of the Bicameral Mind, the band’s sophomore album, which took its inspiration from a 1976 book of the same name about how early humans probably, possibly believed thoughts were messages from the gods. Or something. The occasional local crowd was equally receptive. I saw UR post-Origin of Consciousness at the Ridglea Theater, and while I don’t remember any lines for drinks at the bar, I do recall people playing close attention to the onstage action. Like, obsessively close. (Note to shredders: You’re not gonna catch all of Bill Pohl’s tricks by seeing him only once.)

The hubbub didn’t last long — probably for all of you. For me, I’ve been waiting what seems like forever for another Bill Pohl sighting. And like scrolling across a heartwarming puppy meme amid a Dear Leader/anti-Dear Leader tweetstorm, voila. Here it is.

With Kimara Sajn, the “brain; drum brain” (according to the liner notes), Pohl has crafted a humble-feeling virtuosic display that’s just as captivating for its technique as it is for its simplicity: somewhere between fusion and catchiness, bravado and vulnerability. Let It Burn encapsulates the sensation of witnessing cool greatness while also feeling its heat. Album closer “Owl” is a good representation of the Let It Burn ethos. Over a semi-funky rhythm, Pohl simply goes off, sweep-picking around in circles before coming to a Metheny-esque melody that’s as honey-dipped as it is melancholy. Following a screechy breakdown (uh, birds), Pohl settles onto a mainline where he mixes up a chunky riff with staccato, starting/stopping flurries before the song simply flutters away.

Until next time. — Anthony Mariani