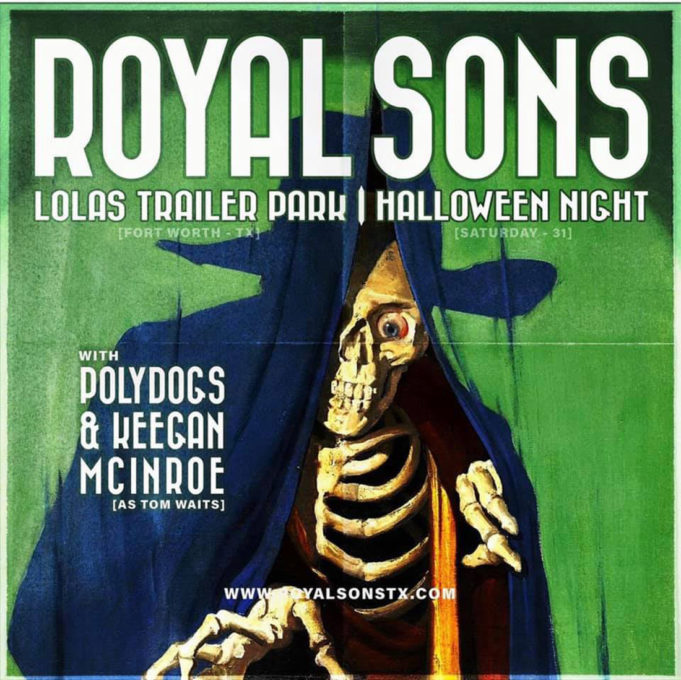 Almost as if by divine intervention, Halloween falls on a Saturday this year, allowing families to double-mask up and go door to door to select from abandoned but hopefully oft-replenished assortments of candies and for young people to double-mask up and celebrate the end of civilization as we know it. As the Lizard King once told the City of Angels many moons ago, “I don’t know what’s gonna happen, man, but I wanna have my kicks before the whole shithouse goes up in flames. Alright. Alright!”

And there can’t be four better local acts to send off our hedonistic, Satanic, “libtard” commie asses than the ones playing Lola’s Trailer Park (2735 W 5th St, 817-759-9100) this weekend. At 7pm Friday, it’s the superlative KZPS-esque cover band Big Mike’s Box of Rock, and at 9pm Saturday, the loud and melodic Royal Sons will be preceded in loudness and melody by the rowdy, bluesy Polydogs. For the after-party, singer-songwriter Keegan McInroe and his full band will play a complete set of Tom Waits numbers — hoping to hear pretty much anything off Bone Machine or Blood Money. They’re perfectly Halloween-y. And apropos for la fin du monde.

And hear it, I will. Lola’s will be busting out a “brand-new streaming platform” for the show. I’ll update this story with the details once they become available. As much as Lola’s will be enforcing mask wearing and social distancing, I’m still too a-scared to go. I’ve been battling a tiny cough and don’t want to accidentally infect anyone. My healthy fear should not hinder your decision to have your kicks before the whole shithouse goes up in flames next week. Tickets for Big Mike ($10) are available via Prekindle.com or at the door, and the Mexican food-loving mavens behind Delicias De Guerrero Food Truck will be onsite. Tickets are limited for the seated Royal Sons/Polydogs show. Visit Prekindle.com for more.

Whenever you’re there, you must wear a mask unless you’re seated, and you must practice social distancing. Sanitizing stations will be, um, on hand throughout the grounds, you Satanic mechanics.

Lola’s won’t be the only spot for live original local music this frightful weekend. MASS (1002 S Main St, 682-707-7774) is also opening its doors to the unwashed but also the hopefully sanitized. At 7pm Friday, Grant Morrison and his band will play a costume party ($10 cover), and on Halloween, former Flickerstick/February Chorus frontman Brandin Lea will take the stage. Tickets are available via Prekindle.com. Happy Halloween, comrades. — Anthony Mariani