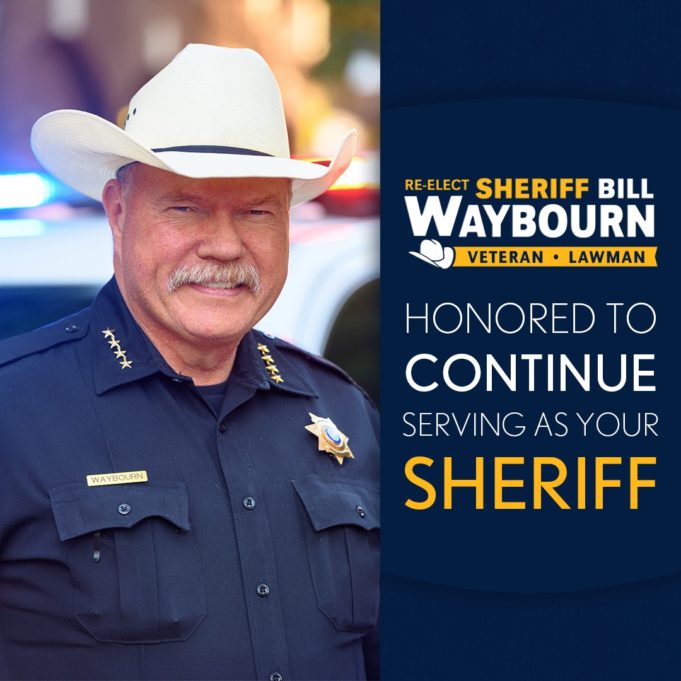 Following a record-breaking county election that saw 64% of registered voters cast ballots, Sheriff Bill Waybourn has claimed an election victory. Waybourn, a Republican who was first elected four years ago, garnered 53% of the votes compared to Democrat Vance Keyes’ 47%, according to unofficial results released early this morning.

“From the bottom of my heart, I want to thank the people of Tarrant County for choosing me to continue serving as your sheriff,” Waybourn wrote on his Facebook page. “I am honored by your trust, and I look forward to continuing my service to our communities.”

Waybourn based his reelection bid on what he said was a need for further reforms to the sheriff’s office, which manages Tarrant County Jail. Waybourn has worked with county officials to speed up the process of magistration (where bond amounts and release conditions are set) at the jail. Those reforms, he said, were needed to prevent the types of lawsuits that have targeted monetary bail policies in Dallas and Harris counties in recent years (“Criminalizing Poverty or Ensuring Justice?” July 8).

Waybourn remains under scrutiny following 10 deaths at the county jail this year. The deaths, which resulted from suicide, COVID-19, and a range of health-related problems, do not show a specific pattern but generally point toward poor jail conditions.

This past July, Waybourn told us that his top priorities, if reelected, would be to develop a mental health diversion center that would remove mental health care from the county jail and place individuals who are experiencing a mental health crisis in an “environment that would help get them the care they need.”

He said he hopes to “bring to fruition a complete reentry program that starts within the jail and partners with private companies and nonprofits to set the table for success as individuals come out of the jail and into the free world. … [I would also] work to create a use-of-force laboratory that allows our officers and deputies to train on de-escalation strategies and real-life scenarios, allowing our Sheriff’s Office team to keep calm in tense situations. Lastly, [I would] implement a strategy based on third-party staffing studies to gain the staff and equipment needed to meet the needs of our community and provide servant leadership to all of Tarrant County.”

The reelection of Waybourn, along with the current 3-2 Republican majority at the Tarrant County Commissioners Court, ensures Tarrant County’s continued cooperation with ICE. Under the 287(g) agreement, which was brought by Waybourn soon after his first election to office, ICE agents can deputize sheriff department officers to perform limited immigration-related tasks. Waybourn maintains that undocumented inmates are dangerous and repeat offenders, even though immigrants are less likely to commit serious crimes than native-born Americans, according to the American Immigration Council, Cato Institute, and numerous prominent groups that track crime data.

Keyes said his first action, were he elected, would have been to end the 287(g) agreement.

“The 287(g) agreement has no appreciable positive impact on crime, is divisive, and is a political pet project rooted in fearmongering, not best criminal justice practices,” Keyes told me this past summer. “It promotes the type of moral panic, minority-threat rhetoric that contradicts the very ethos of community policing. The presentation by the Tarrant County sheriff’s office was itself a strong argument for why the agreement should be canceled. As a major metropolitan area, Tarrant County is an outlier by being a party to the agreement. The agreement is not a mark of good leadership but rather a stubborn commitment to a failed policy.”

In a concession speech via Facebook, Keyes told his supporters to continue to work to make Tarrant County what it can be.

Waybourn’s reelection by a majority of Tarrant County voters marks an upset for progressive-minded voters who were hoping to ride a wave of resentment and anger toward Donald Trump. Waybourn’s unapologetic, rule-of-law approach to managing the county jail continues to appeal to many Tarrant County residents. Jail deaths and voluntary agreements with ICE overshadowed much of Waybourn’s first tenure. Making good on promises to reform mental health services and to implement de-escalation policies could reframe his second term of office.