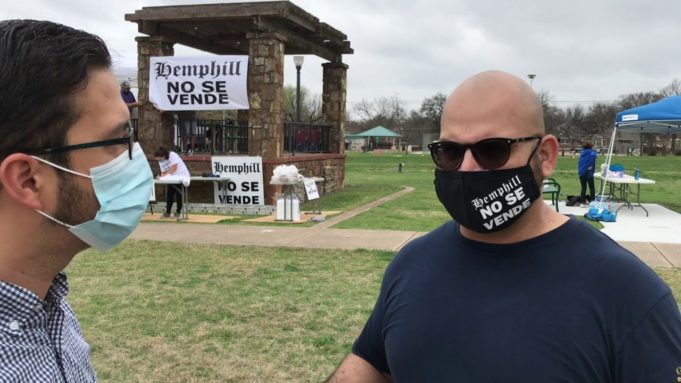 Last Saturday, residents of the Hemphill neighborhood gathered to raise funds for a scholarship in honor of Patrick Zamarripa, the former Dallas police officer who was one of five officers killed in 2016 in a sniper attack. Members of the grassroots group Hemphill No Se Vende (Hemphill Is Not for Sale) helped organize the event that featured music, dancers, speakers, and food trucks.

Hemphill No Se Vende’s co-founder, Ricardo Avitia, told us that his group plans to hold community events throughout the year to support resident-driven initiatives and to build solidarity against unwanted development (“Hemphill for Sale?,” Dec 2020).

“Due to our efforts, we were able to take the zoning changes off the table,” Avitia said, referring to proposals that the city developed in conjunction with certain neighborhood groups over the last few years. Fearing that the zoning proposals would turn the Hemphill neighborhood into an extension of the nearby Near Southside, Avitia and other longtime area residents began organizing community events and speaking during city zoning commission meetings.

“It’s more than just zoning issues that we are talking about here,” Avitia continued. “We want to talk about health, wealth, and education as well. This is going to be an all-out movement, and this is just one of the few events that we have planned for the future.”

Valerie Zamarripa, Patrick’s mother, said her son was raised on the South Side of Fort Worth.

Patrick “always wanted to be a police officer,” Valerie told us. “Unfortunately, on July 7, 2016, he was killed in a massacre. My dream is to try to help other kids who want to reach for their dreams like he did. He did get out of the barrio, so to speak. My vision is to help one or two students with scholarships” and hopefully others.

Contributions to the Patrick Zamarripa scholarship can be made through Cash App via $PatrickEZamarripa01.