When the word “taqueria” comes to mind, rarely is it synonymous with scantily clad female employees, a human dressed in a beer bottle costume corrupting a pole, and surprisingly great customer service. Not that authentic taquerias we have come to love provide terrible customer service, but typically the food is the sole focus, and that’s enough to warrant return visits.

Taquerias operating throughout Fort Worth are mostly owned by hardworking families showcasing various food styles from native regions. Take Jalisco’s seafood-heavy influences or the streets of Mexico City, where pineapple-soaked pork rotates on a spit before being shaved into thin slices, served in the fold of corn tortillas, and sprinkled with onion and cilantro.

But at the newest Mexican eatery in the West 7th corridor, the entertainment comes first, and the food, at least the appetizers, is a byproduct. San Diego-based El Chingon, which bills itself as “Bad Ass Mexican,” does not exhibit mom-and-pop characteristics in the slightest, and the only part of that description that bears any truth is that, yes, the apps are bad.

A scroll through social media reveals that El Chingon (Spanish for “bad ass” or “best of the best”) was built to party — and that’s perfectly fine if that’s what you’re looking for. They know their customer base, and with the Fort Worth location being their second, in addition to other concepts in California, they’ve learned how to throw a bottle-serviced banger. Energetic Latino music bounces off the walls, festive colors cover murals and furniture, and a generously sized patio and outdoor bar come complete with a painted airstream trailer.

Without bringing the hammer down to hit tilt, praise is to be provided for El Chingon’s customer service. Having one attentive server is always good, but an entire team working together to ensure you’re taken care of is noteworthy. Our drinks never ran dry, any food that came out wrong was promptly corrected, and finished plates never lingered long.

Secondly, every drink ordered from a tequila- and mezcal-dominant list was as polished as possible. Choose the base of your drink for $10, then add a blanco, reposado, or anejo tequila or mezcal for a couple dineros more.

The Mexican Firing Squad was a big hit. Its briny reposado — a tequila typically “rested” for less than a year in oak barrels — sang along with in-house grenadine and bitters. The fruity guava- and agave-forward Battle of Juarez upended the basic Jose Cuervo by turning it into a smooth sipper, while smoked bitters and the smokiness of mezcal tangoed gracefully with almond orgeat for The Zapata.

And that’s where most of the positives ended.

For our appetizers, we selected the chorizo for an additional $3 to top the queso fundido, which came served in a not-so-sizzling skillet, lukewarm and gooey. Due to the mildness of both the mozzarella and Manchego cheeses, the dip, once cooled, became a block of dairy that shattered our chips into pieces. The minced chorizo had a cinnamon-esque sweetness to it that failed to complement the dish as we had hoped.

Next was an elote that was nothing more than a boiled corncob where the advertised fire roastedness went MIA prior to being sliced into wheels finished with a slathering of mayo, cotija cheese, and Flamin’ Hot Cheetos. Usually a bowl or cob of elote will disappear with ease when in front of me, but this was barely edible, more so just a novelty.

The ceviche tostada with cod and shrimp, drizzled with agave syrup and touched with cilantro, red onion, jalapeno, and avocado, missed the mark when compared to other ceviches I’ve eaten before. The fish was unduly chunky and rubbery, and collectively with all of the other ingredients, the serving was rather humdrum. This dish should have been a satisfying balance of salty and tangy-sweet, spicy and freshly bright.

And we were dying to try the wedge salad with the addition of al pastor, but unfortunately the spicy habanero cream overwhelmed the iceberg lettuce to the point of being unbearable to eat due to excessive heat, which is usually a quality I seek fully aware of the gut-twisting punishment to follow.

The tacos saved the day. Abundant with delectable meat fillings, light on the garnish of pickled onion and cilantro and a spread of crema, and stuffed in doubled corn tortillas, the tacos are well worth trudging through the unappetizing apps. It’s as if something clicked in the kitchen. The flight of tacos for $15 on the happy hour lists five tacos, and this will be your best bet rather than forking over $14 for a plate of three tacos plus rice and beans.

With fajita plates that fluctuate between $23 and $48, depending on how many hungry people are in your party, just remember El Chingon can most certainly deliver a party. Unfortunately, the appetizers won’t be invited. 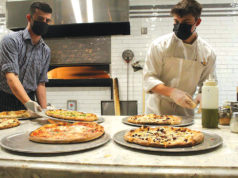