The buildup to the entrance of 97 West Kitchen & Bar (especially in the evening) is impressive. Strings of glowing bulbs cast uneven streaks of light along the long brick promenade that is Mule Alley (“Mule Alley Arrives,” June 2020). The brightly lit “DROVER” sign, which looms three floors above the main entrance to the hotel’s restaurant, is a statement piece in itself.

Drover’s layout allows for the natural marriage of a lodge for visitors (or staycationers) and an attached restaurant and bar for the masses. Chef Grant Morgan (Dragonfly, Hotel Zaza, Velvet Taco) heads 97 West’s food and beverage operations. On a recent evening, I passed on the upscale noshes and opted for booze.

The hostess suggested either the restaurant or lobby bar. The longish restaurant bar fills the center of the main dining area. Nearby and toward the hotel rooms, the lobby bar seemed a quieter option to order a cocktail or three. I perched on one of dozens of cowhide couches and chairs after ordering my first libation.

The lobby plays its cowboy theme without being hokey. (Read: The walls are mercifully spared of rows of trophy hunting regalia.) The space was actually quite homey, in an oversized, leather-bound kinda way. The signature cocktail list was tiny but mighty. Six options offer variations of traditional favorites, and each recipe, interestingly, contains lime or lemon juice.

I sprung for the Texas Paper Plane (Blackland Distillery bourbon, Aperol, bitters, and lemon juice), which came adorned with a dried orange slice. Wafts of citrus met my nose as the first sip hit like a boozed-up Aperol Spritz that was followed by a slightly spiced finish.

The Lavender Bee’s Knees (Jameson whiskey, elderflower liqueur, lemon, simple syrup, and cucumber) was a delight, even if it was a bit on the syrupy side. Given the menu’s promise of lavender and cucumber, I was expecting something a little more, um, light-bodied.

97 West’s variation on the Moscow Mule was enjoyable but took some getting used to. The first sips missed the mark, possibly due to how the drink was mixed. After imbibing my way through the cocktail, though, I found it to be a lovely amalgam of flavors that mimicked sweet peach tea. 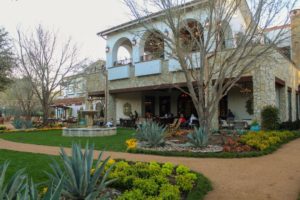 The new restaurant and bar offers plenty of beer and wine options. The defining draw of the Northside newcomer is the abondance of varied drinking environs. From the bustling restaurant space to the quieter lobby and restive outdoor seating options, 97 West Kitchen & Bar is a beautiful work in progress and worth the visit.