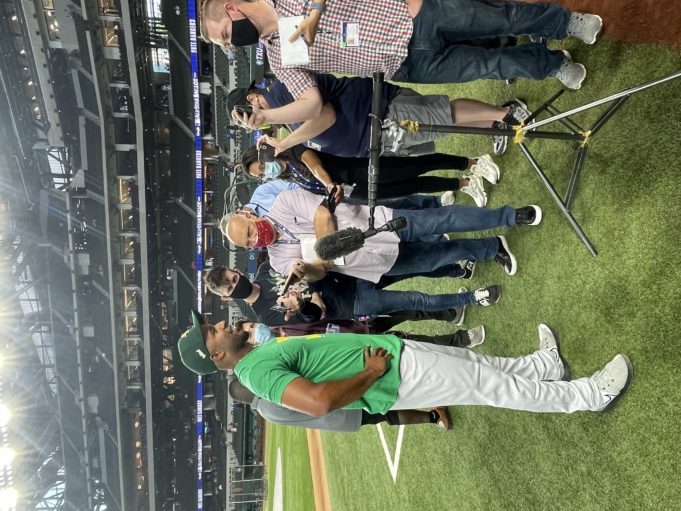 It was a day many Rangers fans, like myself, had circled on their calendars, the day that Elvis Andrus would be back in the building. He arrived early Monday afternoon and headed to the visitors’ clubhouse at Globe Life Field for the first of four games with his new team, the Oakland A’s, against the Rangers.

The two-time All Star met with more than a dozen media members who had gathered in front of the Oakland A’s dugout to talk to the one-time Ranger now wearing the A’s green. The now 32-year-old reminisced about his 12 years as a member of the Texas Rangers.

“I came here as a kid and got out as a man,” Andrus said. “Everything was here. My dreams came true here. I had my first kid, the World Series, all those memories. It’s hard to forget. There’s always gonna be a great place in my heart, and being back on the other side feels weird, but I’m really happy with where I’m at right now.”

Following his media availability, he went to the stands behind home plate to talk to fans and sign autographs.

“I love these fans,” he said. “I have so many great memories here, so we’ll see how it goes in the game. I’m trying to not let the emotion get it. There’s a lot of emotion. It’s not easy.”

While his time with the Rangers has gone, his ever-present smile that is as big as the Lone Star State has not.

Andrus still enjoys the game and likes to have fun. He was definitely looking forward to playing in front of Ranger fans at the new stadium since there were no fans at the games last year because of the pandemic. It was the first time he would play against his former team.

When he came up to bat in the top of the second inning, he received a thunderous ovation that lasted long enough that he had to step back from the batter’s box, remove is helmet, and acknowledge the crowd’s appreciation.

There were several signs throughout the stadium that read, “Thank you, Elvis.

Andrus’ career with the Rangers began in 2009 when he was promoted from Double A to the Major League club without ever playing Triple A. To make room for him at shortstop, the Rangers moved 2008 Gold Glove winner Michael Young to third base.

Andrus made his Major League debut in the Rangers’ home opener on April 6, 2009 and hit a double in his first Major League at bat. It would be his first of 1,743 hits as a Ranger.

He was the last remaining Ranger of the teams that went to the World Series in 2010 and 2011.

Prior to the game, Rangers President of Baseball Operations Jon Daniels and Manager Chris Woodward talked to the media via zoom about Andrus.

“He brought a level of energy day in and day out, whether the team was in first place or struggling,” Daniels said. “He brought that enthusiasm and energy to the park every day, and it was infectious.”

Woodward said he’s happy that Andrus is getting the opportunity to thrive with Oakland, and he’s rooting for him to succeed all the time — except when he’s playing the Rangers, of course.

When Andrus, who grew up in front of Rangers fans’ eyes, was asked how he wanted fans to remember him, he replied, “I just want to be remembered as a guy that gave everything he had for the organization. I brought a lot of great memories to this franchise. I was always proud to be a Texas Ranger and will always be. I think that it’ll never go away. Nobody will take that away.”

Andrus still makes his home in the Dallas area, and he and his wife Cori are expecting their third child in August.

Meanwhile he is hoping to once again return to the postseason and perhaps his third World Series. Right now, Oakland is one game behind Houston in the Division.

Ozzie Garza has been writing about the Rangers for more than 20 years and is a frequent contributor to the Fort Worth Weekly.