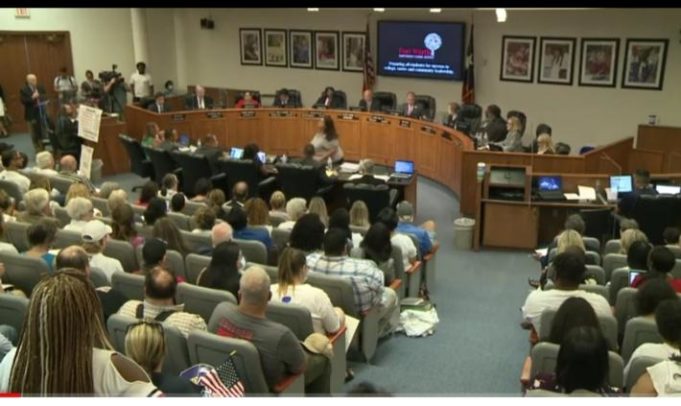 One hour before Tuesday’s Fort Worth school board meeting, supporters of racial equity gathered outside the district’s administrative building to denounce efforts by Texas leaders to censure the impacts of systemic racism in public institutions.  State Republican lawmakers recently enacted a law that limits how slavery and racism can be discussed in public school classrooms.

“Data proves that racial inequity negatively impacts educational outcomes, and Fort Worth ISD is doing the essential work to eliminate that gap,” said Patricia Arvanitis, CEO of Leadership ISD, in a public statement leading up to the gathering.

Shawn Lassiter, who also works for the nonprofit that trains and supports leaders who serve public schools, said her group takes inspiration from Opal Lee, the 94-year-old civil rights activist who successfully led the movement to make Juneteenth a federal holiday.

Soon after, hundreds packed the administrative building to speak during open comments at the beginning of the school board meeting. Several current and recent school district students spoke in favor of allowing free and open discussions on race relations in school curriculum. Dozens of parents alternatively spoke for and against the merits of Critical Race Theory (CRT).

Recent misinformation efforts by right-wing blogs and Republican state leaders have spurred parents to attack the merits of Critical Race Theory, the academic framework for understanding how slavery and racism frame our country’s past and present. Baseless accusations that CRT is related to Marxism or that it in any way is designed to make white people feel guilty about America’s racist past have been rebuked by the scholars who use CRT for academic purposes, but that hasn’t slowed the spread of misinformation about the theory (“Educator Talks Critical Race Theory and Racism in America,” June 18). CRT is not taught in Fort Worth public schools or any elementary or high schools in Texas.

“I’m proud to say my family was part of the Juneteenth walk,” said Sabrina, a Hispanic mother and early speaker. “On the other hand, you are further dividing our country by allowing Critical Race Theory to be in our school’s curriculum. You are condoning the same narrative of the racial divide which came from those who kept slavery alive. This is child endangerment. Parents like myself want our children to be educated, not indoctrinated. With your racist ideologies, you are instilling hate into our children.”

“I’m standing up today to say that teaching and understanding unity is essential to our education in this country,” said Dr. Allisson Campolo. “Racism is systemic, and it is institutional. Colorblindness does nothing but whitewash history. By maintaining a false narrative that no race has ever subjugated any other race, we take no responsibility for our history and we deny all of us the ability to move forward. It will take a pronounced effort from all of us to make our schools more equitable, and turning a blind eye to our past only dooms our future.”

Amy Currie said that racism is known to be evil and telling young white children that they are evil is child abuse.

Catherine Pompa, a white woman who said she recently pulled her four children out of public school and placed them in private school, said CRT is “is reformulated Marxism, a neo-racist worldview that exists to agitate and enable radical identity politics, divide people, and force children to see themselves as either an oppressor or a victim.”

Ashley Paz, who served as Fort Worth school board trustee until recently, said, “It is unfortunate that people who do not have the best interest of our schools at the center of their actions have misinformed so many good-natured people. Everything from the facts being presented around student achievement in Fort Worth ISD” to what we are teaching in our schools have been grossly misrepresented.”

When it comes to academic success, the school board has a long way to go, she added, but CRT is not the culprit.

“The reality is that Fort Worth school district’s equity work has nothing to do with CRT, which is a graduate-level framework, and it has everything to do with giving marginalized students access that have previously not been available,” she said.

Many of last night’s critics of CRT invoked the name of Jesus, Paz said.

“If I’m upholding these Christian values, then it is my duty to understand the ways that I can do better by my fellow man,” Paz said. “And what I have learned over the course of the seven years when I was deeply engaged in this work is that we can always be growing and always be learning how to do better.”