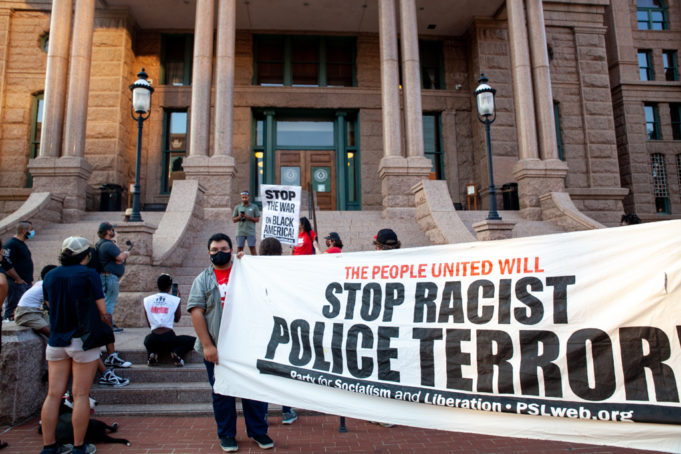 About 25 people took to the steps of the Tarrant County Courthouse downtown Thursday evening for a rally. They might have captured little attention from passersby were it not for a giant banner on display reading, “THE PEOPLE UNITED WILL STOP RACIST POLICE TERROR.”

One at a time, speakers stood before the crowd to discuss various topics, including racial inequities, police brutality, overturning the current economic system, and upending the criminal justice system.

“All people deserve respect,” said Arlington’s Michael Fanning, a member of the Party for Socialism and Liberation DFW (PSL DFW), the co-organizers of the Shut ’Em Down rally in conjunction with the Dallas Alliance Against Racist & Political Oppression. “That’s the basis of all this.”

The local groups put together the event in response to a call to action from Jailhouse Lawyers Speak, a collective of prisoners who provide other prisoners access to legal education and resources.

The group urged organizations nationwide to gather on September 9 in commemoration of the 50th anniversary of the Attica prison uprising, when prisoners rioted and took over the institution in Attica, NY, demanding better treatment. The uprising is commonly credited with kickstarting the modern prisoners’ rights movement.

The evening was peaceful. The impassioned words of the speakers, at times drowned out by the traffic on East Weatherford Street, filled the air.

The rallygoers were met with no resistance.

At the outset, two police officers on bicycles watched from across the street, but after a while they left the immediate vicinity.

Some drivers made their opinions known as they whizzed by the rallygoers. Most signaled with a few light honks and either waved or drove by with a fist raised in solidarity. At least one driver honked and put a thumbs-down out the window.

The majority of speakers were from Dallas. One of them, Jasmin Flores, said the PSL DFW held the event in Fort Worth in part to increase the group’s presence in the area.

“We want to reach the community out here, build community in Fort Worth, and make our presence known,” she said.

At least two speakers were from Fort Worth: Jordan Mazurek and Richard Thomas.

In 2015, Mazurek co-founded Fight Toxic Prisons, a grassroots organization that advocates on behalf of prisoners. Thomas became involved in the organization soon after. Mazurek credited their group with halting progress on several new private prisons in the South.

“You only need five to eight people to shut down any prison,” Mazurek said to cheers.

Next on the organization’s list to challenge is the Federal Medical Center-Carswell, the prison south of Lake Worth which holds female inmates with health needs.

Some that evening spoke about their personal experiences.

Dallas’ Olinka Green faced the crowd from the center of the courthouse steps, feet firmly planted, face earnest beneath the broad brim of her straw feet.

Green has organized against prisons since the 1970s. Most of her work is in Dallas, but she said she came out to support this community.

When asked what issues she thought most concerned Fort Worth, she brought up Atatiana Jefferson. Fort Worth police officer Aaron Dean shot and killed the 28-year-old woman during a welfare check. Dean was charged with murder but has not yet gone to trial. It has been two years since the killing.