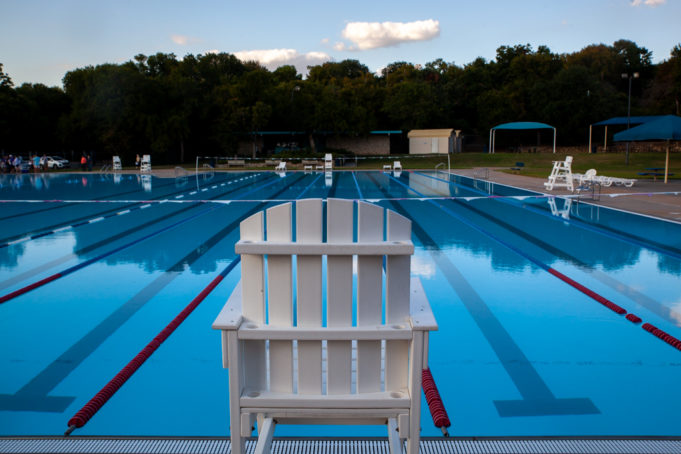 Tucked in a grove among oak trees, within earshot of the Fort Worth Zoo, the storied Forest Park Pool has served Fort Worth for just shy of a century. Plans to demolish it and replace it with a new, smaller one have residents seething.

“They basically want to replace it with a fancy sprinkler system and a few lap lanes, and if you’ve been to Forest Park Pool, you know that isn’t going to cut it,” said longtime swimmer Janelle Montgomery.

During the swim season, she dips in two to three times a week to swim laps in one of the eight 50-meter lanes.

The new plan calls for four 25-yard lanes, the primary concern for opponents of the plan.

Montgomery and other advocates say the city should make more of an effort to preserve a place not only functional but historical or at the very least make sure the replacement maintains the same footprint.

More than 150 people came to air their grievances, bringing their opinions and, in some cases, signs.

Beck set the tone for the night and moderated the at times heated question-and-answer session.

“I want you to hear me when I say there is a proposed plan for the pool, but that is not the final destination,” she said.

The proposed plan comes from the 2012 Citywide Aquatic Master Plan Update. City Council members adopted it to address the aging pools and overall lack of aquatic facilities in Fort Worth.

Fort Worth has two public pools to its name, plus a partnership with City of Fort YMCA of Metropolitan Fort Worth that lets residents use its outdoor pool.

The city of Dallas, according to its website, offers 17 pools and a city-run water park. The city of Austin has 32 pools and 11 splash pads. The city of El Paso, whose population is roughly 25% smaller than Fort Worth’s, had five public pools open this summer, with seven more under construction.

“Somewhere I guess we got our eye off the ball,” Zavala said.

The plan designated the new pool at Forest Park an Enhanced Neighborhood Family Aquatic Center, or E-NFAC. For examples of an E-NFAC, look to the Marine Park Pool and Aquatic Center, north of downtown. It includes a leisure swim area, four 25-yard lap lanes, a bathhouse, and a water slide. The surface area is 6,875 square feet.

The 2022 bond program sets aside $7.5 million for the new Forest Park Pool.

Right now, Forest Park would stay open for the 2022 swim season, provided there are no mechanical failures, and the new pool would open in 2024.

Forest Park has seen many changes over the years. In 1967, the city demolished the original pool and built another in the same iconic round shape on the same site.

In 2010, the city shut it down due to structural issues. Thanks in part to a grant from the local Christian nonprofit the Radler Foundation, the pool reopened in 2013 with a new liner, a slide, and increased access for the disabled.

Critics of the new design have asked why the city cannot perform repairs again.

“This pool has to go away, alright?” he told me in a phone interview on Thursday.

The liner was replaced after untold gallons of water leaked from the shell. Repairs, Penn said, would only patch, not fix, the structural issues.

“You can assume it’s not structurally stable underneath this pool,” he said. “It would be frivolous and not a very good use of taxpayer money to repair this.”

According to a 2007 engineering audit, the facility needs $3 million in renovations, including replacing the bathhouse, patching the shell, and installing a new mechanical system.

Chuck Burr disagrees with Penn. The coach and founder of Team Ridglea Masters Swimming said he believes the pool could be fixed if the city would figure out how to finance the project.

Burr knows a thing or two about this: He owns Aloha Pool Service, a local company that services 300 to 400 homes weekly, he said.

He came out to the meeting on Thursday because he grew up swimming there and his team relies on it for practice.

“We’d be heartbroken if we lost the pool,” Burr said.

The new facility would not accommodate as many swim lessons, nor would it as easily accommodate local teams who rent the space for practice.

Between Sigma Swimming and the Fort Worth Drowning Prevention Coalition, there were 350 swim lessons at the Forest Park Pool this summer.

There were 11,984 visits, down from the typical 20,000 visits a season. The summer season was shortened due to a worker shortage caused by the extended school year.

Advocates say the new changes would lower capacity at one of the only pools available for public use.

City staff follow the public’s lead, Penn said. He said the city has no opposition to longer lap lanes, but changing the plan poses financial as well as practical challenges. Though private donors could step in, nationwide regulations pose a logistics issue.

To comply with current regulations, a pool the size of Forest Park needs double the current parking. That much new pavement could impact the surrounding park.

“The public just knows we’re going to replace the pool and are concerned, but I think they’d also be concerned by changes to the park to fit a pool of that size,” Penn said.

The Parks and Recreation Department has hired a consultant firm to work-up the projected cost of 25-yard lap lanes, 50-meter lap lanes, and 53-meter lap lanes and will put the figures before the public once they have them.

Despite the conundrum, Chuck Burr at least left the meeting feeling optimistic. He said he thought city leaders had heard people’s concerns and would work out a way to keep the original design of the Forest Park Pool.