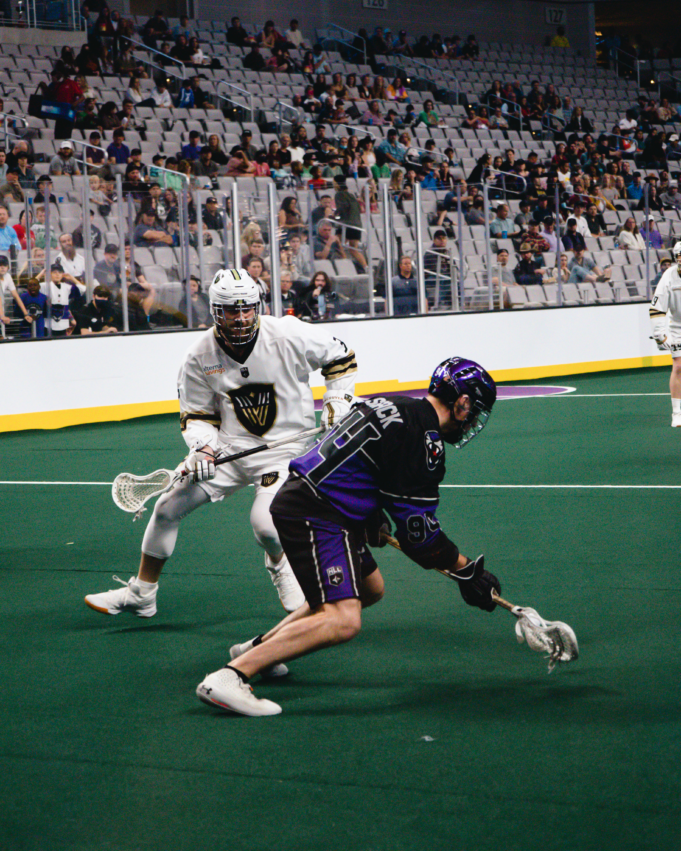 For professional sports entities outside the top tier of the most popular pastimes, success equates with survival. Can you bring in enough revenue to pay your expenses (or else have a team owner with the means and passion to sustain consistent financial losses)? Fort Worth’s newest franchise took their home field for the first time Friday amidst curiosity about their team, their game, and, especially for long-time observers of Fort Worth’s sports scene, their long-term prospects.

“There’s a couple of different metrics you can use for success in the first year. Number one, is the team competitive, especially at home?” explained Panther City Lacrosse President, CEO and Managing Partner Greg Bibb. “Number two is, obviously, ticket sales, generating awareness for this team in a very large market. And making sure as many people as possible know about us and come and sample the product this year, because that will pay dividends for us next year and beyond.”

The indoor lacrosse club shares ownership and management with Arlington’s Dallas Wings of the WNBA, who will play their seventh season in Tarrant County this summer. They’re still working to make that franchise an institution, even with the familiar sport of basketball at their disposal. National Lacrosse League Commissioner Nick Sakiewicz came to Fort Worth for the opener, and his background includes a significant role in establishing teams, a league, and a sport in the early days of Major League Soccer. That circuit has now joined the American big four leagues in having stable franchises as by far the rule rather than the exception. MLS even announced it’s starting its own minor league, and Fort Worth’s longest-running current minor league team, the Vaqueros, competes in that sport.

If you’ve heard their radio spots this past week or seen their media outreach (or maybe even read a blog post or two), you might have known Cowtown’s box lacrosse team existed. But they’ve got work ahead of them to become established. And in this sport, the players won’t live here full-time, though Head Coach Tracey Kelusky’s troops have done what they could to bolster the brand.

“We’ve only really been down here one weekend,” he explained. “The guys were out in the community. Guys were at the local foodshare. They’re doing their part, and they love the fact that we’ve got youth lacrosse teams here. When guys are in town, they’re going to be supporting all the community endeavors.”

What the men Kelusky supervises do on the field matters, too. Friday, we saw the excitement the game can bring, including big hits and bang-bang-behind-the-back passes for goals. Unfortunately, more of the positives came from visiting Vancouver. PCLC battled back late, and actually outshot the Warriors for the game, but ultimately lost 14-8. Wins and losses sometimes don’t matter as much for minor league teams, but Panther City doesn’t position itself as lower level. The NLL represents the top level of its sport.

However, they might take a cue from their opponents. Vancouver moved to its current home city in 2014 and has yet to finish a season there with a winning record. But they averaged nearly 7,000 fans a game each of the last two years after finishing last in the league in that category the previous two years. Friday night, the crowd resembled those we used to see when the Fort Worth Convention Center’s arena was too large for a low-thousands turnout on many nights of hockey or basketball. However, Panther City has something those teams never had, one that helped the Warriors turn their crowds around: a modern facility in the heart of the city. Sakiewicz called Dickies Arena “truly the nicest arena in our league.”

One area in which the home club experienced some success Friday was its battle cry. Management hopes fans will catch on to the tradition of shouting “We are Fort Worth, We are Panther City” after the home team scores. The crowd seemed to learn it fairly quickly, and by the second half, one could hear chants of the mantra breaking out spontaneously in the crowd. So while factors like a final score and an aggregate crowd didn’t go their way, the new team absolut