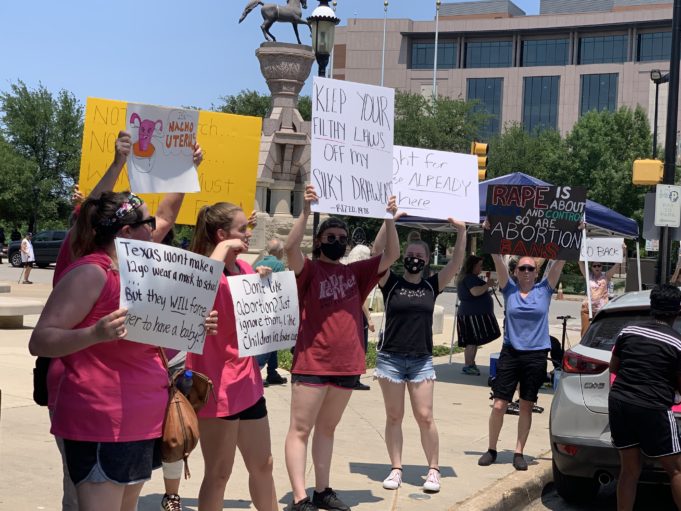 The heat wasn’t the only thing raging at the Tarrant County Courthouse downtown this past Saturday as the Bans Off Our Bodies Women’s March saw almost 1,000 protesters throughout the morning raising their voices in furious protest of the newly leaked Supreme Court draft opinion, screaming the old standby, “My body, my choice!!!” with all new outrage.

This rally cry has served women well for as long as the powers that be have not. Echoing throughout the ages, bouncing off the steel walls of the patriarchy, it continues to reverberate in the skulls of wealthy white men, following the majority leaders of our country down alleyways of paranoia that someone, anyone, will take what these powerbrokers believe is birth-rightfully theirs.

That’s the funny thing about a bunch of money and power you didn’t earn: It always leaves you looking over your shoulder in fear of those who see through you, those who might take it away, those who have been made stronger than you from years of fighting for what little they have. Because if there’s one thing oppression has done for us women, it’s that it has made us stronger.

This strength was on full display Saturday as alt-right religious zealots stood with neon yellow signs and sandwich boards prophesying HELLFIRE AND DAMNATION to all the attendees. The allegedly pro-life protesters brought megaphones to raise their voices for them and meandered around listlessly, too lazy, scared, or impotent to look anyone in the eye on the other side, smirking silently with indifference as women screamed confrontationally in their faces, “My body, my choice!!!” Women impassioned by an issue that could mean life or death to them seemed to be just another day of repulsing women to the zealots.

Interestingly, no women came with the church, just these male dinosaurs lazing around in the name of God, “men” perplexed by the vast unknown in a rapidly changing world, heading toward a progressive future that bewilders them daily what with its onslaught of new ideas and information: science, statistics … dinosaurs.

Or at least we thought it was heading that way until the Politico leak eclipsed the sun last week with real threats of a draconian future, resplendent in inequality, reminiscent of the Dark Ages.

The only power men don’t have that women do is procreation, so of course men have been relentlessly fixated on claiming power over that power throughout the ages. What’s more timeless than Roosevelt rooms of privileged, scotch-swilling white men making decisions about how the oppressed and impoverished should live their lives?

Truly for all these reasons and more, women in Fort Worth had a child tugging on their sleeves Saturday morning, you know, other than the real, known children many of them sacrifice for daily, oftentimes alone, and that child is who they were when they first learned that we are not just pretty or not pretty, thin or not thin, sweet or a bitch. We are in fact real people, real human Americans, just as entitled to the same freedoms established in the Constitution as any man.

Watching their mom struggle everyday alone, persevering in the masculine swell of American apathy, Ozzie Lee Rose saw first-hand how the power of choice was imperative to the health and welfare of women but would not be made a priority in government without the bolstering of passionate empathizers united in activism.

Ozzie’s orchestration of the Bans Off Our Bodies Protest was an amazing feat given that they began spreading the word only a little over a week before Saturday at a local pub and to passengers in the Uber they drive.

“It’s also a testament to the brilliant organization skills of my co-organizer Melanie Quinn,” they pointed out with modesty, gushing at how they could never have handled the magnitude of responders the event garnered — in a mere handful of days — alone.

Quinn was the gentle and strategic yin to Ozzie’s gregarious, charismatic yang, gently and eloquently taking care of all the attendees with water bottles and compassionate attention at a table set with snacks and sign-making materials in front of the courthouse. But anyone could see the magnitude of the turnout was a testament to Ozzie’s connection with the people of Fort Worth as well as anyone in general really as they hugged even strangers, who joyfully hugged them back, for coming out in support of the cause.

Ozzie charisma aside, the abundance of reasons to support the cause is staggering for all Americans — not just women. Women just know first-hand how powerful and essential sisterhood is in the card-stacked game of politics, stacked because of the unfettered men flitting about for centuries unencumbered by the duties of children they helped create.

As women lead their lives guided by the ethics of care, we continue, as we always have, to leave the comfort of our beds in support of others, but especially on a Saturday morning, raising our voices ragged in support of the freedom of choice Roe granted us back in 1973 — and we’ll be damned if they even leak at taking it back.

Some of those reasons can be found here, in the words of all the hopeful Americans, men and women — well, “man” (there was one of them) — who refuse to accept anything less than abject freedom and equality.

“This new law has no room for rape or incest. I was raped by my stepdad when I was 14. That man is prison right now for what he did to me and many other girls. He gets out this year, but I have to live with the memory of what he did to me for the rest of life.” — Madison, 18, Stephenville, Texas

“I was raised by a civil rights activist and the first man to ever volunteer to teach at integrated schools in Louisiana. I have been going to protests for women’s right since I was 14. I went with my stepmom to protect the doctors and nurses that were getting attacked at a clinic in Baton Rouge by Operation Rescue in ’91. I’ll never forget seeing a woman getting stabbed in the stomach with some car keys when she refused to put her sign down.” — Victoria Phillips, Athens, Texas

“If Roe does not stand, women will die. A close friend of mine just had to choose an abortion or her life. She chose her life.” — Crystal Morris, Fort Worth

“Every mom in this town is struggling in some way to take care of their kids right now. If they don’t, who will? Do you know how many times I’ve watched my husband ‘sleep’ through the baby crying?” — Latresia Hart, Fort Worth

“Do you know how many women I’ve known that would have died if they had not had an abortion? Four. That may not seem like a lot, but that is a lot, especially when it used to happen all the time when I was growing up in the ’50s and ’60s and I remember those times. That’s why I’m here today.” — Barbara Houston, Lancaster, Texas

“I’ve had three miscarriages and one abortion due to an ectopic pregnancy, so we just adopted. Going through that and the women from all of my support groups helped me understand how common miscarriages are. Just because a woman is pregnant does not mean it’s a baby.” — Felicia Whitman, Dallas

“I came out in support of a friend, when she told me it could be a situation of her going to jail for murder? I was like, ‘I’m there.’ ” — JB Gomez, Fort Worth

“Honestly, it just blows my mind that we are back here again. It’s like they think we’re just going to give up or something.” — Rachelle Smith, Garland, Texas

“I just wouldn’t be able to look in the faces of the next generation who can’t even vote yet if I didn’t know I’ve done something to protect their freedoms like the women who came before me.” — Lily Kies, Fort Worth

“My mother committed suicide due to postpartum depression when I was a 3-month-old. She was forced to have the baby of her rapist at 14. I’m surprised she even survived that, although I guess, in the end, she didn’t” — Diane Simmons, Fort Worth

“Republicans say they will help single moms, but do you know what they do to these young girls? Teenage moms? They say, ‘Have the baby, and we’ll help you.’ That only lasts until the girl is 21. Do you know how many single moms have come to us at the shelter after these religious groups drop them? Hundreds.” — Cindy Burke, Fort Worth 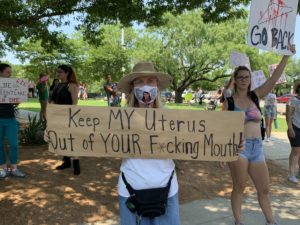 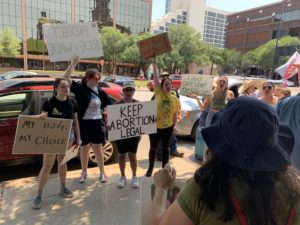 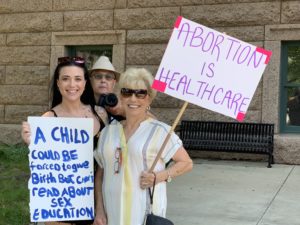 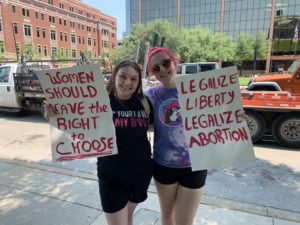 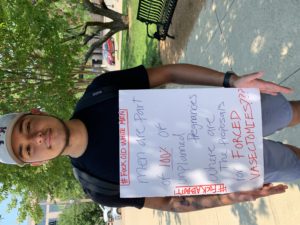 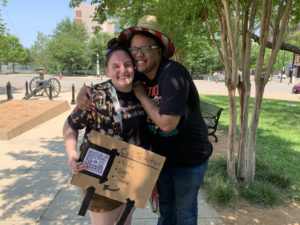 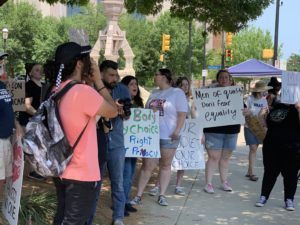 This column reflects the opinions of the editorial board and not the Fort Worth Weekly. To submit a column, please email Editor Anthony Mariani at Anthony@FWWeekly.com. Submissions will be edited for factuality, clarity, and concision.