As you prepare your menu for your Thanksgiving feast, brace for sticker shock. This year, drought in most of the Midwest led to higher costs for feed and water for turkey farmers, and a highly lethal avian flu reduced the turkey population substantially. The resulting twin-demic led to a 70% increase in prices this fall. According to the U.S. Department of Agriculture, turkey flocks in 42 states, including Texas, are affected. The bug hit small growers harder than commercial flocks. Turkey breast meat is up to $6.50 per pound, more than $2 per pound over the cost during the COVID pandemic in 2020.

It’s not just the big factory-to-frozen turkey enterprises –– local producers have felt the pinch, too. Prairie Oasis Farms (1020 Fox Rd, Milsap, 817-550-7022) has provided pasture-raised poultry and meat for over two decades to local consumers and through the Cowtown Farmers Market.

“We didn’t have a problem getting our turkey chicks in, but the drought hurt us,” said owner Kim Boone.

As for your Christmas holiday rib roast or your Hanukkah brisket, you’ll feel the impact with the prices of beef as well. The price of brisket has jumped along with the cost of everything else — this trend has been ongoing since 2019. Part of the increased in cost is due to drought conditions that have lingered for a third year. Brisket prices are currently up between 30 and 40%.

Restaurateur Jill Bergus grew up as part of barbecue royalty. Her grandfather purchased the legendary Kreuz Market, which has operated in Lockhart for close to 150 years, just after World War II. Her cousin Keith Schmidt is the third generation of the family to own the restaurant and smokehouse. Bergus and husband Jeff Bergus opened Lockhart Smokehouse 11 years ago, with the first location in the Bishop Arts District in Oak Cliff. The second location, in Arlington at Texas Live! (1650 E Randol Mill Rd, 817-769-1747), opened just before the COVID shutdown. The supply line shortages post-pandemic have been well-documented, but Bergus says that this year, right after things seemed to be getting back on track, she noticed a marked difference in the quality of the brisket she was receiving from her supplier.

“The cattle supply in the summer, people were slaughtering early, and maybe the meat hadn’t been finished,” she said. “And getting quality workers who know what they’re looking at, with the tightening of the labor market, has been a challenge.”

It’s odd to think that here in Texas, where we produce a lot of beef, there would be any kind of shortage of meat, but according to Bergus, most of the beef comes from the Midwest, where the drought has been particularly unkind to ranchers.

“A lot of the cattle in Texas is specialty, and it’s already spoken for,” she said. “It comes down to food sustainability. As we keep dealing with climate change, it’s kind of Whac-A-Mole as to what’s going to be available.”

For restaurateurs or home ’cuers, brisket is a bit of a challenge. There are only two cuts per animal, and they’re incredibly marbled, so you’re buying a lot of what you don’t eat.

“There’s an incredible amount of shrink on it,” Bergus said. “It’s nearly 50%, and I don’t get a discount on what shrinks away.”

In addition to a tight market, a drought, and increased demand, one fast food chain co-opted brisket for burgers. While most fast-food places have taken turkey off the menu due to supply, brisket is being used in ways it perhaps shouldn’t be.

“Arby’s did drive up the price of brisket during that promotion” of the Smokehouse Brisket Sandwich, Bergus said.

As far as turkey goes, Bergus says Lockhart Smokehouse has been without turkey breast for close to two months.

“We started experimenting with chicken quarters,” she said. “They’re a little easier to smoke, and people seem to like them.”

Turkey is back on their menu now, and the restaurant has a supply of turkeys, which they’ll sell pre-smoked for pickup.

Lockhart Smokehouse is joined by Hurtado Barbecue, which opened a third location, in Fort Worth last month. Owner Brandon Hurtado also felt the pinch of the poultry shortage, but at the time of this writing, you can still order a smoked 12- to 14-pound turkey, whole brisket, or glazed ham, along with the Mexi-cue sides like elote, brisket beans, or cheddar grits, for pickup on Nov 23 at the Arlington location only (205 E Front St, 682-990-3266).

Due to the scarcity, stalwart Local Foods Kitchen (4548 Hartwood Dr, 817-238-6464), which usually offers a pickup turkey option, opted not to even attempt turkey this year. A message on their website reads, “Due to a bad outbreak of avian flu this year, turkey suppliers are raising prices and delivering fewer birds to restaurants. … The market is very tight, so we have made the decision not to offer turkey or gravy.”

If it’s absolutely important to you to have a whole turkey on your Thanksgiving table, plan to buy ASAP and plan to be happy with a frozen bird that’s smaller and more expensive than last year’s. Waiting until Thanksgiving week to grab your bird is going to be a no-go.

The advertised price for frozen Butterball turkey at most chain supermarkets is $1.99 a pound. At Central Market, fresh organic turkey (14-20 pounds) will run you $4.49. Whole Foods Market’s price for frozen turkeys is $2.49 a pound. Aldi Supermarkets was the winner at $1.09 a pound, with limits on how many you can purchase. In comparison, turkey costs last year ran about $1.15 per pound, according to the U.S. Department of Agriculture.

Here’s the catch: If you want anything larger than 14-16 pounds, you’re going to have to research and travel. My neighborhood Aldi had an endcap freezer full of Butterball frozen turkeys but none of them was over 15.5 pounds.

Cowtown Farmers Market (8901 Clifford St, White Settlement, 8am-noon Sat) has several producers who may be able to help with organic, farm-raised meat, but if you were hoping to order a bird locally for Thanksgiving, you may already be out of luck. Kim Boone of Prairie Oasis Farms said they opened their holiday turkey orders Oct 1, and the preorders were sold out the next day.

In truth, the pilgrims didn’t specifically have a heavy-breasted 20-pound turkey on their tables. According to source documents at the Smithsonian Institution, leaner wild fowl (possibly turkey, maybe duck), corn (in the form of bread and porridge), fish and shellfish, and maybe pumpkin were plentiful. White potatoes (from South America), sweet potatoes and sugar (from the Caribbean), and grain weren’t introduced until years later.

For this Thanksgiving, you’re likely going to have a smaller turkey. Consider filling in the rest of the table with roasted winter-friendly squash and root vegetables. The Cowtown Farmers Market is a good source of inspiration for a meatless or plant-forward meal, and Becca Knutson, manager and farmer at the market, has provided one of her favorite plant-forward recipes with products you can grab from the market, along with a few pantry staples.

“This roasted dish is one of my favorites to make during the winter holidays but is perfect for this chilly weather we’re having now! It uses several seasonal items that can be found at our market weekly.” From juliasalbum.com.

How to Roast Brussels Sprouts

– Then slice all Brussels sprouts in half.

– In a medium bowl, combine halved Brussels sprouts, 2 tablespoons of olive oil, salt (to taste), and toss to combine.

– During the last 5-10 minutes of roasting, turn them over for even browning. The cut sides should be nicely and partially charred but not blackened.

How to Roast Butternut Squash

– In a medium bowl, combine cubed butternut squash (peeled and seeded), 1 tablespoon of olive oil, maple syrup, and cinnamon, and toss to mix.

– Place butternut squash in a single layer on the baking sheet.

– Bake for 20-25 minutes, turning once halfway through baking, until softened.

– Toast the pecans for about 5 minutes (maybe a bit longer) until they get darker in color.

“Radishes are a great cool season crop here in North Texas. You can find them at the Cowtown Farmers Market from October through April. One of my favorite recipes to make with radishes is this Radish Apple Relish from Melissa’s Everyday Cooking with Organic Produce. It is a beautiful and delicious recipe. It is perfect for family and friend gatherings.”

salt and pepper to taste

Pita bread or crackers and soft cheese, for serving

– Season with salt and pepper and toss to combine.

– Serve with wedges or pita bread or crackers and a soft spreadable cheese (like yogurt cheese, burrata, or mascarpone) 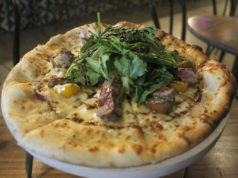