Transparently, I sleep like shit most nights. As a father of four — three of them younger than 6 — good rest can be hard to come by, so the occasional weekend afternoon siesta has become a life luxury coveted to a degree it’s depressing to describe. That established, I’ve really started to hate this year’s Horned Frogs. There have been almost no relaxing afternoons as my offspring doze, only pacing, texting, silent-cheering, and groaning. There have been numerous heartwrenching, nail-biting, and indigestion-inducing Revivalry games between the Frogs and Bears, but somehow Saturday was on another level.

If you haven’t seen the final sequence, crawl out from under your media rock and go to any social or video service, and you’ll find a clip of Emari Demercado (#3) taking a handoff and being tackled before sprinting toward the sideline with the rest of the Frog offense before a well-orchestrated wave of white assembles like a Swiss clock to kick a 40-yard field goal into a mass of purple gathered on a grassy knoll between gleaming-golden goal posts for a 29-28 victory as the clock strikes all zeroes. Among the group of Frog fanatics was a young brunette woman clad in a plum puffer jacket who appears to be simultaneously elated, crushed, laughing, and crying. We (Frog faithful) are her, and she is all of us. Not even announcer Brock Huard was immune as he exclaimed after the TCU sideline emptied in celebration: “I am shaking. I can’t believe what Sonny Dykes just did.” So are we, Brock, and we can’t either.

Saturday had me worried, and I feel vindicated. Baylor’s Dave Aranda executed a gameplan that was effective: keep the ball away from TCU’s offense, which worked for the majority of the game. BU’s rushing attack accumulated more than double what the purple and white produced. Baylor suffered their own misfires (a failed field goal, an interception thrown in the endzone to finish the first half) but found themselves leading the fourth-ranked Frogs by eight with less than seven minutes remaining and still by two with as many minutes left. The most concerning part of TCU’s final drive was also what made it the most impressive: Derius Davis (#11) didn’t play on Saturday because of a hamstring injury. Clean-up running back Kendre Miller (#33) and anticipated first-round NFL draft pick Quentin Johnston (#1) were also absent due to injury during the fourth quarter when the Frogs were trying to mount yet another comeback. But despite missing his three most dynamic weapons, Max Duggan (#15) — who led his team in rushing as well as passing — towed his toads into field goal range for Griffin Kell (#39), who promptly redeemed his only missed PAT of the season by drilling the most dramatic field goal in Horned history.

This year’s team is among the most elite Frogs ever at 11-0 (and the only Big 12 squad in the College Football Playoff era to reach that milestone). The only other Funkytowners to accomplish this were the 1938 national champions, who finished their season at that mark, as well as the 2009 Fiesta Bowl qualifiers (who lost to Boise State) and 2010 Rose Bowl champions. It’s worth acknowledging that those big-bowl Frogs, while special, weren’t walking the gauntlet of a major conference during those Mountain West days.

It’s been said many times recently that Duggan deserves a trip to New York for the Heisman Trophy presentation. He won’t win, but if there is any semblance of a meritocracy in college football — there isn’t — he’ll be there. Duggan is his own player and an athlete that deserves individual recognition beyond comparison to others, but his effect is analogous to former Heisman winner and national champion Tim Tebow, both in strengths and deficiencies. Duggan, like Tebow, is top-tier among quarterbacks while probably an above-average passer at best. Both Tebow’s and Duggan’s best football weapons are their legs and guts rather than a penchant for quickly dissecting a zone defense. But despite their limitations, these players, and those like them, are who fans and teammates want in the shotgun when the situation seems insurmountable and one possession remains. I’m not suggesting you’ll see Mad Max embark on a failed minor league baseball career or hawk T-Mobile phone plans, but ultimately what made Tebow great — and what makes Duggan similar — are the intangibles that won’t shine at the NFL combine but are effervescent and infectious to everyone around them.

Duggan and his team of destiny have one regular-season hurdle to hop before a rematch with either Kansas State or Texas in the Big 12 championship game, and it’s in the form of last-place Iowa State. The Cyclones are in a rebuilding year, especially in the offensive phase, and won’t reach a bowl this season. Despite their basement designation within the conference, their seven conference losses have come by a combined 38 points, averaging less than one possession per heartbreak. While they might be the best-case opponent for the final week of a season with more drama than trying to buy Taylor Swift tickets online, there are no weeks off in the conference where “Every Game Matters,” and it’s likely that Dykes and Duggan will need to take care of business at home without some of the most electric Frogs, who will try and heal for their championship rematch. Expect Iowa State to do their best Xerox of Aranda’s ball control and multiple-run-fake strategy to limit TCU’s possessions. The Clones have one of the best defenses in the country, and without Dykes’ typical firepower, he and coordinator Garrett Riley will need creativity to balance production with the declining health of their playmakers. To give it to you straight, buckle up, because it’s not even close to over yet.

Duggan is leading this team through a resurrection. Like Lazarus of Bethany’s four-day entombment, the Frogs were buried in four years of mediocrity and unable to eclipse a seven-win season. Duggan, Dykes, and Riley are writing a new gospel in Frog lore, unlike any we’ve seen in the past. In two weeks, we’ll know if they fall from grace or ascend to the College Football playoff. Either way, this season will always be special, even though I still really miss my naps. 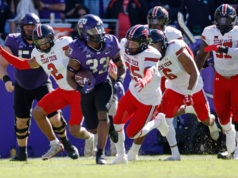