George Gershwin got an unusual run through at the Fort Worth Symphony Concerts in the Garden last week. 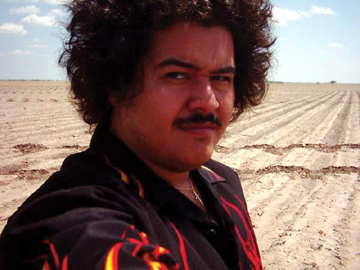 Young German Maestro Alexander Mickelthwate, conductor of the Winnipeg Symphony, and Italian pianist Roberto Plano, a finalist in the 2005 Van Cliburn Competition, joined forces for a version of the composer’s Rhapsody in Blue that emphasized the work’s symphonic qualities over its Broadway roots (and its familiarity as United Airlines’ theme song). Leave it to young non-Americans to come up with a new take on an old American classic. The strength and new colors the duo found were, well, rhapsodic.

You may recall that last year we threw a fit over the poor sound quality at the Botanic Garden. Well, maybe someone there was listening, because the sound this time out was full and strong, although the strings still faded away occasionally. (Too bad the typically elaborate fireworks display that accompanies Concerts in the Garden was shorter and less varied than before. Oh, well. I guess you can’t have it all.)

Over at the Eisenmann Center in Richardson last week, we saw another Van Cliburn finalist — a gold medalist, in fact. Talk about a raw deal: After winning the contest in 1973, Russian pianist Vladimir Viardo was not allowed out of his homeland for 14 years, and the Soviet regime kept his number of performances there to a bare minimum.

Viardo returned to America in the 1990s, has since held a post as artist in residence at the University of North Texas, and now splits his time between Texas and the New York City area. In probably the oddest development, he spends some time every year teaching in China, another dastardly communist government but one that doesn’t seem to mind his pro-democracy outlook.

At the recital, more than half of the audience was Chinese, and the master of ceremonies welcomed everyone in English and Chinese.

Language didn’t matter once Viardo began to play. The qualities that won him the Van Cliburn were on full display. To contemplative moments, he brought palpable introspection, and for bravura highlights, a big, flashy Russian sound. He was at his most alluring during a brief set of variations by the contemporary Russian composer Alemdar Karamanov. The pianist brought extraordinary depth to Karamanov’s highly personal and poetic statement.

If any artist is suited to sponsor an international piano competition, it’s Viardo. The pianist inaugurated the Viardo International Piano Competition for players ages 12 and up last year in California, and it will reconvene this summer in Tarrytown, N.Y. Viardo expects to bring it to the Metroplex soon. Having served on several contest juries and seen a lot of backstage maneuvering, Viardo says that his competition is “without lobbying and politics.” For more information, visit www.music.ndnu.edu/viardo.

A lot of local filmmakers’ material isn’t bad. One local, 22-year-old David Sowden, has already written, directed, and posted two shorts with a third on the way to complete his Ransom Trilogy. Shot over the course of 12 hours with the help of a friend, cameraman Nicholas Zebrun, the 180-second thriller Midnight Ransom (Chapter 1) recently earned “Best of the Rest” honors in film buff Gary Cogill’s 3-Minute Movie Contest. Inspired by receiving recognition in a competition that brought thousands of submissions, Sowden went forward — and twice as long — on Chapter 2, Mid-Day Ransom, now playing on his site, www.myspace.com/pieproductions. If the two completed chapters are any indication, the almost-finished 10-minute closing segment, Final Ransom, will be a nice pay-off.

As far as Kultur can tell, Sowden appears to be the only local filmmaker who’s taking the short online form seriously. A lot of the other locally based filmic product is of the zany sketch variety, including just about everything from Denton’s Bad Apple Productions (www.myspace.com/bastudios). BA’s Multiple Personality News is a little Onion-ish, but in a good way. A bit about Santa Claus suffering a nervous breakdown around some kids ain’t bad.

Local cinema authority, writer/director Jon Keeyes thinks MySpace is invaluable. “I’ve done some amazing networking with other filmmakers,” said Keeyes. “I have discovered more and more producers look at MySpace in the same terms as watching a demo reel. I don’t believe that producers are out there looking at pages to give [aspiring filmmakers] money. It’s more about promoting projects to a possible audience.”

While Sowden and Bad Apple focus on shorts, Adrian Santiago is serious about getting his debut feature Holiday up and running. With some money from a couple of guys who read and liked the script for his psychological thriller, Santiago put together a trailer and posted it on his page, www.myspace.com/projectblackstudios. His hope is that bigger fish will cruise past his site, get a taste of what he’s cooking, and then help him make the whole enchilada. “I was stumbling around the ‘net, and I found this guy,” Santiago said. “He said, ‘Everybody has an idea for a movie, but nobody has the patience or tenacity.’ I said, ‘OK, give me a week.’ A month later I tripled the length of the script, and he helped me find equipment.”

In perfect, tongue-in-cheek DIY fashion, the trailer says that Holiday is “coming when it’s finished.”

Local filmmaker Adrian Santiago hopes the trailer for his feature ‘Holiday’ will attract some financial support via MySpace.

Most public radio buffs know that one of the most successful call-in shows, probably of all time, is Car Talk. There’s just something about good-natured, funny experts in arcania that makes for compelling radio. Though I won’t go as far as to say that architecture is as exciting as auto mechanics, I will wholeheartedly recommend the new hour-long version of Design Talk. Hosted by Joe Self, an architect and former architecture professor at TCU, and his wife Tracy Self, a licensed interior designer, Design Talk is broadcast Sundays 4-5 p.m. on KTCU/88.7-FM The Choice. Questions on architecture- and design-related subjects as myriad as landscaping, furniture, office design, housing construction, and decorating — the Selfs are on it. For more, visit www.firm817.com.