Home Music Music Feature Shadow Bound
SHARE
Facebook
Twitter
Even though The February Chorus moves effortlessly through different shades of rock — from driving yet airy to seductive yet noisy — the band just can’t seem to shake its penchant for melancholy dread. The stiff spine of nearly every song contains elements of shadow, resignation, and moonlight. 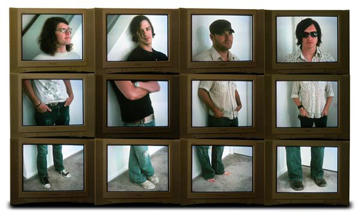 The four young veteran musos who form the band’s core inhabit the emptiness not by whining, stacking the amps to the sky, or wearing lots of black eyeliner. A simple, rock-based arrangement of guitar, bass, drums, and vocals is all Brandin Lea, Jordan Roberts, Austin Green, and Taylor Craig Mills need to raise the hairs on the back of your neck. That, and the foreboding sense of existential angst that comes with getting older — and growing wiser — in “The Biz.”

“We’re experiencing music through mature eyes, rather than when we all started out,” Lea said. “I wouldn’t say we’re getting ‘old.’ We’re just not punk-ass kids.”

Roberts added: “We’ve each experienced a lot of loss. There are things we didn’t know back then that we definitely know now.”

TheFebChor is a byproduct of The Aardvark’s gone-but-not-forgotten monthly Acoustic Mafia jams. A couple of years ago, some of the best singer-songwriters in town, including Lea, Tim Locke (Calhoun), Collin Herring, Chris Hardee (Alan), and John Price, gathered at the TCU-area club mainly to float new songs but also to perform in a totally stress-free, lighthearted setting. Lea, who’s still frontman for alt-rock stalwarts Flickerstick, saw the Aardvark stage as a good vehicle for his own stuff, material that might not have worked for Flickerstick but that was solid. Lea’s friend Roberts, a refugee from electro alt-rockers The Audiophiles (R.I.P.), began providing guitar accompaniment, and a few months later, the two began songwriting together. After completing a handful of tunes, the duo then recruited several area music studs, including Lea’s brother, Flickerstick bassist Fletcher Lea, to perform the songs as fully imagined by Lea and Roberts.

While Roberts has been with Lea since the band’s inception, Green (The High School Assembly) and Mills (Taylor and the Iliads, formerly known as Voigt) joined more recently. For live shows, TheFebChor is capable of either expanding to the magnitude of an actual chorus, with several additional guitarists and a violinist (Alan’s Doug Palhamous), or shrinking to the size of a single solo performer. Funny thing is, the songs are so sturdily structured, they sound good coming from one performer, two performers, or a dozen.

The band’s only remotely “commercial” goal isn’t even commercial. “When it comes down to the choice of either making money or making art, we’ve realized that making money’s impossible to do without making bad musical choices,” Lea said. “I know it sounds clichéd, but this project is not about the possibility for money.” Success, Roberts added, “is five years from now when a great young band credits us with influencing them.”

As befitting a rock ’n’ roll group whose only “commercial” goal is to continue making better music, some of TheFebChor’s songs are composed in such a way as to allow them to change shape over time. “I like to keep the music abstract and experimental on purpose,” Lea said. “There’s something refreshing and unique about spontaneity that I don’t ever wanna lose.”

One of two tracks on The February Chorus’ new debut, The Transportation Demo, “On a Train” can be shortened or lengthened by half or more, depending on the band’s mood. In recent live settings, Lea, Roberts, Green, and Mills have been chugging through elongated versions, to both wring drama from the song’s epic, hypnotic simplicity and to reflect the unique, lonely mystique of the conveyance in the title. “Setting a mood and playing with friends who can relate to you,” Lea said, “that has its own propulsive force.” “On a Train,” indeed.