Home Film Film Reviews Rat Traps
SHARE
Facebook
Twitter
A lot of big names are connected with The Departed, so let’s start with two of the not-so-bigs: Andrew Lau and Alan Mak. They’re the Hong Kong filmmakers who made Infernal Affairs, the excellent 2004 police drama on which The Departed is based. Their movie was compact and ferociously cerebral. Martin Scorsese’s Hollywood remake is every bit as brainy, but it’s the deluxe version. The legendary director successfully converts a tight little thriller into a grand opera, and it’s the best work he’s done in the last 10 years. 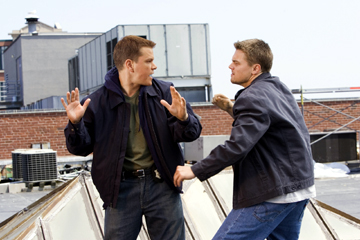 Reviewing Scorsese’s The Aviator two years ago, I criticized moviegoers who wanted him to keep making gangster movies over and over again. To those people I say now, you’ve got your wish. The Departed revolves around two double agents on opposing sides of the law. Colin Sullivan (Matt Damon) joins — and rises quickly through the ranks of — the Massachusetts State Police on the orders of Irish mob boss Frank Costello (Jack Nicholson) for the express purpose of spying on the cops. The “Staties” in turn assign Billy Costigan (Leonardo DiCaprio), an academy cadet from a mobbed-up family, to go undercover into Costello’s operation.

This sets up a head-spinning plot even more rife with betrayals and double-crosses than the original, as the higher-ups among the cops and criminals eventually realize they have moles in their organizations. Colin’s even charged with finding himself, no small task since both he and Billy are left wondering where their loyalties lie. Like the heroes of so many Scorsese movies, they wear one face to themselves and another to the multitude, and get bewildered as to which is true. (That’s Hawthorne, by the way, whom William Monahan’s flavorful script name-checks.)

At two and a half hours, this movie is edited until it’s as crisp as a starched shirt. After a racial-invective-filled introductory monologue by Nicholson, it plunges forward remorselessly, bristling with an atmosphere of pervasive mistrust on Boston’s grungier side streets. After decades of finding enemies under every rock, Costello looks to be losing his marbles, or at least that’s how I read Nicholson’s enjoyably over-the-top performance. DiCaprio and Damon focus like chess grandmasters, as their characters maneuver to maintain their cover and try to figure out whom they can confide in. (Short answer: nobody.) Every time Billy meets his Statie superiors (Martin Sheen and Mark Wahlberg) or Colin talks to Frank on the phone, they’re risking exposure and death. Scorsese’s totally in his element capturing this sort of all-encompassing paranoia, and here as always, it gives his film a dangerous thrill that’s so often missing from most action pictures.

DiCaprio’s nervous, scruffy street tough contrasts effectively with the unflappable, clean-cut Damon, who’s actor enough to know that playing cool is different from playing dead. The two leads do well simply to hold the screen with so many luminaries in the cast, including Alec Baldwin as Colin’s Statie boss and Ray Winstone as Costello’s number-two guy. Standing out in particular is Wahlberg, who exudes such palpable seething dislike for both Damon and DiCaprio (as they do for him) that when they all start punching each other in the face, it feels fully earned.

The movie has many more high-level confrontations like those in store — Wahlberg’s character unloads on an incompetent video surveillance tech: “I’m the guy who does his job. You must be the other guy.” The actors sink their teeth into these scenes with the same relish they have for their Southie accents. A courtly verbal smackdown between Nicholson and Sheen is immediately followed by a much less decorous exchange between Nicholson and Wahlberg. Baldwin, for his part, gets to grab his crotch in front of a roomful of cops at the prospect of bringing down the bad guy. All this testosterone flying around! All these charismatic alpha males butting heads! It’s extremely satisfying to watch, on a primal level. This movie is the cinematic equivalent of a bloody, barely cooked piece of steak.

Not everything works. The subplot in which both Billy and Colin become involved with the same police psychiatrist (Vera Farmiga) doesn’t pay off enough to compensate for its essentially farfetched nature. There’s also one character’s death at the very end that doesn’t happen in the original version. Understanding the logic behind the change, I still think the Hong Kong ending works better.

That brings us back to the filmmakers from Infernal Affairs, Lau, Mak, and co-writer Felix Chong. It’s important to note that the triumph of The Departed belongs to them as much as anyone. Many of the memorable sequences and details here — the cell phone ringing during the climactic shootout, the riveting wordless initial conversation between Billy and Colin, the shocking denouement in an elevator car — are their inventions and not Scorsese’s. For all that, the American master takes their masterpiece and turns it into something different that works on its own terms, and does it without throwing out their good ideas. That act of alchemy is one of many that make The Departed one of the decade’s best films.