Home Arts Art Classy Stuff
SHARE
Facebook
Twitter
The private art collections into which New York City’s legendary Metropolitan Museum of Art digs for gems to borrow and exhibit usually belong to either aristocratic families or multi-national corporations. But in 1950, when Met curators wanted to display “Charles” by Fort Worth artist Dickson Reeder, they didn’t approach the city’s rich collectors named Tandy and Richardson. Nope, the Met had to go to a little school on Cowtown’s South Side. 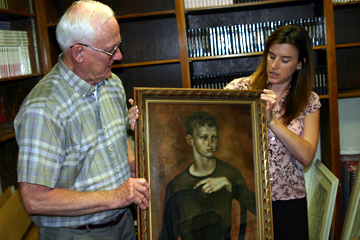 “Charles” was one of about 30 paintings belonging to Fort Worth’s McLean Middle School.

“[McLean] has a lot of things in their collection that are masterpieces,” said Ken Jackson, founding member of Collectors of Fort Worth Art, an informal group of about 50 people who foster interest in the city’s early art.

Beguiling in a sort of “Mona Lisa” way, the portrait shows a young man (or is he a boy?) sitting on a wooden chair. One hand rests loosely on the top rail of the chair back; the other hand is lower, gripping the wood tightly. He glances sideways, pondering, maybe even brooding. Is he sad, determined, agitated, restless?

The art world fell in love.

Masterpieces, like wine, can take time to ripen. The school bought some paintings in the 1940s, ’50s, and ’60s from local artists who had yet to cement their reputations. Now those paintings represent significant works of some of the city’s best artists.

What was a middle school doing buying original art, in an era when basic school accoutrements were even harder to come by than they are today? And once bought, how did a collection worthy enough to draw the attention of a New York museum end up dust-covered and forgotten? It’s a story of two women’s vision, a gradual dying of interest once those women were gone, and the local art enthusiasts who are rekindling that vision.

Back in 1946, McLean teacher Beatrice Dunning (a respected artist in town) suggested forming an arts council at the school to foster arts appreciation and beautify the campus. Assistant Principal Margaret Sullivan added another idea — acquiring paintings from local and statewide artists and starting a permanent collection. The arts council raised funds and bought its first painting in 1947 — “Jazz Props,” an oil on canvas by S.P. Ziegler, who headed TCU’s art department at the time. The school’s collection grew each year. Artists donated paintings, and other works were purchased through funds raised by faculty, staff, parents, patrons, and school yearbook sales.

By the time Sullivan retired in 1968, the collection had grown to 34 paintings. Artists included some who weren’t renowned at the time but have since become sought-after names from the city’s post-World War II era, including David Brownlow, Don Deardorff, Bror Utter, Emily Guthrie Smith, Blanche McVeigh, George Grammer, and Josephine Mahaffey.

“The collection was so well known at one time, and now it is nearly totally forgotten,” Jackson said. “These things are treasures. Museums don’t have this stuff.”

Gregory Dow of Dow Art Galleries on Camp Bowie Boulevard remembers the collection well — he attended school at McLean in the late 1960s and saw the pieces hanging on the walls. Back then, most works by these artists typically sold for a couple of hundred bucks each. All would sell for many times that amount now, Dow said.

“It’s a pretty significant collection,” he said. “All of those people are deceased. It represents an era of a lot of good Fort Worth artists.”

To honor Sullivan’s retirement, the art collection was catalogued and displayed at Fort Worth Arts Center for a 1968 exhibit.

Sullivan’s successors never bought another painting. Interest waned, the arts council faded, and the paintings were hung willy-nilly around campus or stashed here and there with little oversight.

“Time took its toll,” Jackson said. “The original people all died off, and nobody took their place, and the principals let it go.” The collection was mostly forgotten, except by a few local art aficionados.

The lore surrounding the collection piqued Jackson’s curiosity four years ago, and he and two other members of the local art collectors group asked the school if they could catalogue the collection. The principal had no idea that the school owned a collection or that the valuable works were scattered around campus, Jackson said.

“The principal at that time didn’t even know what they were,” he said.

Six of 34 paintings were gone.

A year after the collectors did their cataloguing, a new principal came on board at McLean. Nancy Weisskopf, an art fan, learned of the collection from faculty members and staff and took an immediate interest. The first thing she did was track down the surviving paintings and lock them in a closet. She learned that insurance claims had been filed on two of the paintings years ago. Four others remain missing, with no indication that their absence was ever officially noticed. “This school has been turned upside down, so the ones that are missing, we know are missing,” Weisskopf said.

Some of the paintings desperately need attention, and all could use some cleaning and preventative maintenance, she said, but those chores are expensive. “Right now we don’t have the money to restore them.”

The school plans to display the collection again at some point, but Weisskopf and others want it done right this time, with proper lighting, UV-protective glass in the frames, and security measures to thwart vandals or thieves. The school is considering exhibiting the collection at a gallery for a short time to garner interest and to raise money.

The school principal met with Jackson recently to examine the collection, and they were like kids at Christmastime, ooh-ing, aah-ing, and holding up paintings for better looks, captivated as much by the significance as the beauty.

“It’s not just the art, it’s the history of Fort Worth,” Jackson said, uncovering another painting. “This group you see are the artists who brought Fort Worth art to the world.”