Home Arts Stage A Tiara for TBT
SHARE
Facebook
Twitter
Of Tchaikovsky’s three great ballets — Nutcracker, Swan Lake, and Sleeping Beauty — the last is the most engaging, some would argue his best. The Russian composer reveled in giving life to fantasy, and the fairy tale of a princess who pricks her finger, falls asleep for 100 years, then is awakened by a prince’s kiss inspired Tchaikovsky to new heights of dramatic writing. 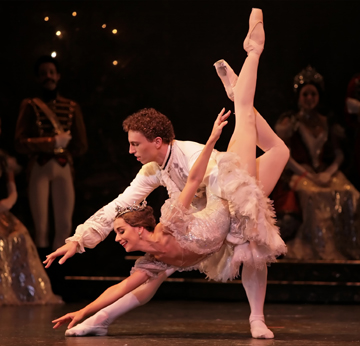 Since its world premiere in 1890 in St. Petersburg, generations have basked in the music’s glow and the choreographic magic that goes with it. But full-length performances are hard to find. The incredible size, difficulty, and cost required to mount the ballet tends to discourage most companies. Texas Ballet Theater put it on four times last weekend in Bass Performance Hall, and, by any standards, it was a triumph. The dancing was first-rate, the scenery and costumes were truly breathtaking, and the house was sold out.

Three couples took turns in the roles of Princess Aurora, the title character, and her prince, and each couple had something different to show. Opening night’s Julie Gumbinner was a gentle, well-bred princess, regal to her fingertips, who danced with Lucas Priolo, a tall, aristocratic-looking prince. Their work together was fluid and elegant, if restrained. Indeed, up until the last act, the corps and soloists seemed so focused on getting everything right that not much else came through.

By the third performance, all the dancers appeared comfortable. The corps was relaxed, and choreographer Ben Stevenson’s joyous celebration of triumphant young love probably reached all ages in the audience. The small fries in particular, and—there were many,—were transfixed. Not a peep was heard from them except at appropriate times, notably when Puss in Boots and his White Cat made their appearance in the final wedding scene.

The Aurora for the third performance was Jayme Autrey Griffith, who brought a wondrous innocence to the role. She enjoyed the fuss everyone made at her 16th birthday and loved dancing with the four suitors who came to seek her hand, but the idea of marriage was miles from her thoughts. Her Prince was Andre Silva, the company’s most exciting male dancer, who earned the weekend’s loudest ovation for his spectacular leaps and turns. He’s not very tall, but Griffith is small, and the two, barely out of their teens, looked the picture-book young couple in love — except, curiously, in the final pas de deux, where they hardly looked at each other. This was true of each couple and was a strange way to end the ballet.

The third duo saw Carolyn Judson as a perky, gamin-like Aurora, with Peter Sweifel as her boy-next-door Prince.

All three ballerinas got through the Rose Adagio balancing act, if not with aplomb then at least without mishap. The famous sequence leaves the dancer on one pointe, the other leg raised behind, with arms raised circling her head. As each suitor approaches to present his rose, she lowers one hand to take his, and he slowly walks her around a complete turn before releasing her. She raises her hand over her head again and lowers it for the next man to repeat the maneuver.

There’s a choreographic hole in the middle of the scene, with Aurora left wandering on pointe and waving her arms to little avail. The old Bolshoi version had the suitors tossing her around like a beanbag, which is fun, if excessive, but Stevenson needs to add something here.

Some ballerinas have a natural gift for balancing on pointe, and others have to work at it. The late Margot Fonteyn could go up on pointe in arabesque, as the position is called, and stay there until the curtain came down and the lights went out. And she was the first ballerina to dance Stevenson’s version of this ballet, choreographed for the English National Ballet in 1968. His great coup was luring Fonteyn from the Royal Ballet to appear as guest artist. The ballet premiered in Venice and toured Europe before opening in London to great acclaim, which established the young Stevenson as a major player on the international dance scene.

Last weekend’s production was created by Desmond Heeley for a 1988 revival of the piece for Stevenson’s Houston Ballet, which he ran before taking over TBT. It’s hard to believe the sets and costumes are 18 years old. They could have been made last week. The final ballroom scene is a stunning stage picture. Three enormous chandeliers and seemingly hundreds of twinkling wall sconces light a massive canopied pair of thrones. The dancers, done up in scarlet gowns with high-pointed glittering tiaras, the gentlemen in snug-fitting uniforms covered in medals, create a lavish, stylized tableau of the Russian imperial court in the early 19th century. For sheer spectacle it’s one of a kind.

In addition to all the glitter, an army of dancers is needed for Sleeping Beauty. The opening christening scene alone has the court assembled with the king and queen, nurses to bring in the baby, six fairies accompanied by escorts (including the lilac fairy trailing four attendants to bestow virtues on the infant) plus six little pages bearing gifts and bringing up the rear. The wicked Carabosse, cursing the child with gusto, has four ugly retainers. We don’t see Aurora until the next act, nor the prince until the one after that. With extras in every scene and specialty dancers in the finale, most performers take on four or five assignments. That TBT could do the show at all, let alone cover itself with glory, is a tribute to Stevenson and the work he’s doing here. With shows like this, Fort Worth is fast becoming an important regional dance center.

Incidentally, TBT is looking into new Fort Worth digs. A feasibility study is under way to see if the vacant land north of Scott Theater on West Lancaster is big enough to house the company. Architect Ames Fender is drawing the plans, and the new structure will extend back over the Scott. Neighbors will be consulted before the project is presented to the city. TBT now lives in a storefront space near Ridgmar Mall, which it outgrew some time ago.