Home Arts Stage Women’s Lib-ido
SHARE
Facebook
Twitter
With their fervent and cunning production of Steve Martin’s adaptation The Underpants, Theatre Arlington and director B.J. Cleveland have done something unexpected — reminded ticketbuyers of the original Martin, a hyper-silly but sly trickster. That version of the comedian has since morphed into the current, officially revered Nice Guy/Oscar Host who can’t seem to do anything very interesting anymore. 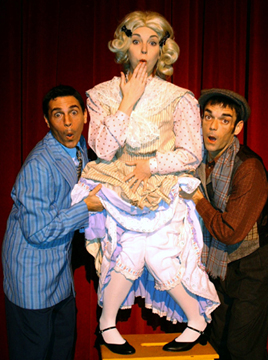 Anyone who’s sleepwalked his or her way through Martin’s slim, tepid novel Shopgirl or smiled approvingly but distantly at the intellectual pretensions of his play Picasso at the Lapine Agile has got to be wondering what the hell happened to the man who wrote “Cruel Shoes,” a short story about a shopper who insists on choosing a pair of mutilating footwear. Whence the mean-spirited muse that inspired “The Elephant Guy,” a hilarious sketch from a Martin tv special in which the tragic John Merrick is portrayed as a vain and lecherous show-biz survivor, complete with long trunk and floppy ears?

It probably helps that The Underpants is based on Carl Sternheim’s early 20th-century German stage satire about the bourgeoisie, called Die Hose. In simply lending his own sensibility to existing material, Martin was under no pressure to create fresh characters and complications. But if his imagination has dimmed somewhat, his nose for good material has not. In all of the deliberate, artificial datedness in which Theatre Arlington drapes The Underpants, the show remains incisive in its gaudy examination of the relationship between public shame and private pleasure. If you want to understand the dynamics that drove someone like the Colorado-based Rev. Ted Haggard to adopt a pious-evangelical-by-day/male-escort-renter-by-night double life, this deceptively frilly show is not a bad place to start.

The piece opens in Dusseldorf, the German capital in 1911, as daydreaming housewife Louise Maske (Emilie Buske) is dealing with the immediate aftermath of what would appear to be a minor incident. She had dropped her bloomers in public while straining to wave at the German emperor in a parade. She has become the talk of the train station, as her gleeful, voyeuristic neighbor, Gertrude (Ashley Magness), informs her. Even worse, her priggish husband, Theo (Jeff Lawson), processes paperwork for the king’s court, and he fears the loss of his eminently presentable job and the couple’s reputation, explaining to Louise that she underestimates the allure that comely legs and breasts have for strange men even when those parts are disguised by garments. Let them be exposed to the sunlight and civilization itself could crumble.

Self-righteous though he appears, he seems to be right. The Maskes have a room for rent, and it’s soon pursued by two men who’ve both fallen into an irrational passion for Louise based on her civic indiscretion. One is a beret-wearing poet named Versati (Kevin Moore), who’s proud of the fact no one will publish him. The other is a frail, secretly Jewish hairdresser named Benjamin (Nye Cooper) whose last name is officially “Cohen with a K.” Neither can fully explain his urge to cuckold Louise’s paper-pushing hubby, but it clearly has less to do with Louise herself than with the thrill of her newfound sexual infamy and how it might heal their own fractured egos. A third suitor comes in the form of the hostile, suspicious Klinglehoff (the Freud-resembling Gardner Williams). Should he deign to become a tenant in the notorious female exhibitionist’s household, he has a laundry list of moral expectations that must be met.

The Underpants is not presented with any attempts at subtlety. The actors strike silent-movie poses when they emote and are lavishly led by their basest emotions. Props explicitly chosen to be phallic and feminine symbols pop up everywhere. The performances are intensified by Jack Hardaway’s wonderful candy-colored chamber-room set, which looks like Willie Wonka by way of Merchant-Ivory. And yet, director Cleveland makes sure everyone is on the same page stylistically, and in this case the style bypasses farce and heads straight to vaudeville, including actors’ directly addressing the audience. The results can be a blast. As Louise, Buske heads the proceedings with an absolute relish for the abject lust imperfectly hidden behind her social mask. Despite her protestations, the hints keep coming that she may have dropped her drawers deliberately. Moore does an impressive job of allowing his character’s literary aspirations to be confused with carnal ones. Veteran Dallas-based comic actor Cooper adds an utterly believable emotional frailty to his hair-dyer’s fumbled attempts at gallantry. At one point he challenges his poet-rival by saying, “Sir, I will be your prophylactic!”

Although adapted by Martin several years ago, The Underpants anticipates what may be shaping up as the “post-family values” era. Although innocent at heart, it encourages you to root for a ripening heroine with multiple-partner adultery as her highest goal. It’s the sort of mischief that can make fallen bloomers shocking all over again. Or maybe, as the show ably demonstrates, remind us that they always have been and will be.