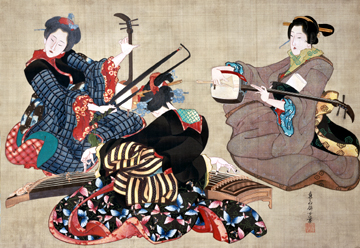 If you’re wondering, “the floating world” refers to the pleasure quarters of the imperial city of Edo (now Tokyo). Between 1615 and 1868, Japan was ruled by the Tokugawa shogunate. The country’s merchant class grew extremely wealthy during this 250-year peaceful interlude, but the shoguns shut them out of the political process. Deprived of any governing power, the merchants turned to art and culture as a sphere of influence. The result was a flowering of ukiyo-e, art that depicted the life of Edo’s entertainment district. It was generally regarded as lowbrow art — you could buy a print for the price of a bowl of noodles — yet the country’s greatest and most vibrant artists produced it.

Ukiyo-e is most famous for its woodblock prints, but the Kimbell’s exhibit focuses on paintings. The ones on display are on subjects that are typical of the art form: portraits of geishas, courtesans, Kabuki actors, and street entertainers, as well as banquet scenes in expensive restaurants and domestic vignettes of women applying their makeup and doing their hair. There are also landscapes by the famous Hokusai. (If you’re interested in following up, the genre is even wider than the exhibit indicates, taking in everything from outright pornography to depictions of demons and vengeful ghosts that presage Japanese horror movies.) The show is organized by Boston’s Museum of Fine Arts, but this is its first stop in North America.