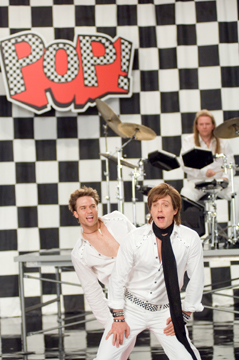 My job is made harder by the fact that this film isn’t an intelligent drama masquerading as fluff. No, this is genuine fluff, and not even particularly well-made at that, with a few patches that are downright hard to sit through. Yet for all that, I wound up liking this movie. Here’s how that happened. The movie begins with a glimpse of Alex Fletcher (Hugh Grant) as a member of a 1980s British band called PoP!, prancing their way through a music video called “Pop! Goes My Heart.” This rapid-fire sequence is a seamless send-up of the form, or rather a perfect one precisely because you can see the seams — for no reason at all, the video’s setting suddenly switches to a hospital halfway through. With a song that’s catchy and stupid in the right amounts, this is a terrifically funny start. For a good while it looks like this will be the highlight of the entire movie, because the action goes steeply downhill. The present day finds Alex bereft of his bandmates, living in New York, and keeping himself afloat by performing at state fairs and high-school reunions. Out of the blue, he gets a hand up from hottie teen-pop idol Cora Corman (Haley Bennett), a fan of PoP!’s who commissions Alex to write a new song for her world tour, which kicks off in two weeks. Thus, she needs the song by Friday, and if he can’t deliver by then, she’ll go with another songwriter. At this point, five-year-olds in the audience will be asking whether this is really how pop songs are written.

Hang on, though, it gets worse. While bashing his brains trying to come up with a song, Alex meets Sophie Fisher (Drew Barrymore, playing her early scenes like she’s on three cans of Red Bull — not pleasant at all, though she calms down later on), the new caretaker for the plants in his apartment. Her occupation seems fake to me, but New Yorkers of means have been known to pay for outlandish services, so I’ll withhold judgment. What I won’t hold back on are the painfully contrived circumstances by which Alex discovers Sophie’s natural untapped talent for writing song lyrics and dragoons her into helping him on his project.

The blame for this sad excuse for a story falls on writer-director Marc Lawrence. Much like Alex, Lawrence badly needs a writing partner, because he’s much better at punchlines than plot construction. “I have amazing insight,” Alex tells Sophie before adding a wry kicker, “I would use it on myself, only I have no problems.” That line and many others are given a spot-on, seemingly ad-libbed delivery by Grant, who carries this movie through its worst times. Early middle age is suiting this actor very well, bringing out his vulnerabilities and lending sting to his self-deprecating wit. It makes his 2007 self much more interesting than the stammering pretty-boy version of him from the mid-1990s. Here he’s playing a guy who’s resigned to his status as a has-been yet hasn’t lost his love of performing, as demonstrated by a delightful scene when Alex sings one of his old hits for an audience of ecstatically shrieking women in their late 30s. You can see him glow under the attention even after hurting himself doing a dance move. The arguments between Alex and Sophie over their song’s integrity (she wants the best work possible, he’s willing to compromise to please Cora) are insubstantial in themselves, but they resonate because they’re really about these characters trying to push each other out of their respective ruts, played by actors who know from ruts themselves.

In addition to his thespian work, Grant also does the lion’s share of singing on the soundtrack, and while he won’t give Jennifer Hudson a run for her money, he does sound better than many actual ’80s pop stars. It helps immensely that he’s singing clever, accessible, direct songs written by Adam Schlesinger, the indie-pop master behind the bands Ivy and Fountains of Wayne, as well as the Oscar-nominated title song for the 1996 musical That Thing You Do! Where most romantic comedies would have the characters express their feelings through soppy speeches, this one does the job through well-written songs, which is a massive improvement. Alex’s late number “Don’t Write Me Off” is charming in context, but the real gem is “Way Back Into Love,” the song that Alex and Sophie spend the film laboring over. We hear the song at the film’s climax in a soaring, polished duet for Grant and Bennett, but the demo version sung by Grant and Barrymore is the one that sticks, the wobble in their voices making their performance feel like an act of courage. I found myself humming the chorus while driving home from the screening, and it made me feel strangely good. Ultimately, my review of Music and Lyrics boils down to: This movie cheered me up. Maybe it won’t work for you. Still, it’s the best recommendation I can give — and that’s pretty good in my book.