Home Calendar Big Ticket College Boards
SHARE
Facebook
Twitter
We’re now far enough into the spring semester that collegiate theater departments have had time to rehearse and stage their new plays. Texas Wesleyan came out with its Benjamin Franklin play last week, and now most of the other schools in the area are following suit. 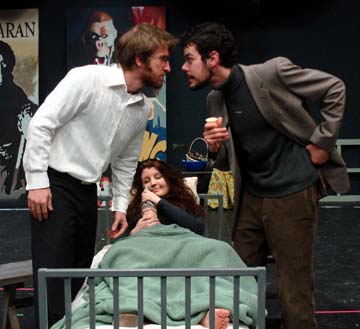 Marsha Norman is best known for ’night, Mother, but before that she got her start in playwriting by drawing on her experience working with mentally disturbed teens at the Kentucky Central State Hospital. From that sprang her first play, Getting Out, a dialogue between a woman who has just been released from prison after eight years, and her angry former self. TCU will be staging this frequently overlooked piece by one of our better-regarded playwrights.

Martin McDonagh’s The Cripple of Inishmaan requires some historical background. One of the first celebrated documentary filmmakers, Robert Flaherty visited the islands off the coast of Ireland in 1934 for a project called Man of Aran. McDonagh’s play imagines an 18-year-old with a deformed body who wants to be in the movie. In doing so, it examines the gulf between people’s messy lives and the work of a filmmaker trying to paint an idealized portrait of them. This show runs at UNT.

Of course, college students love satire and spoofery, so it’s only natural that UTA is going with Urinetown, the musical about a large corporation that takes advantage of a drought to charge people a fee to empty their bladders. Songs such as “It’s a Privilege to Pee” will no doubt give you pause when you run to the restroom after the first act.

Check our Calendar listings for dates, locations, and ticket prices for these three plays.