Home Eats Eats Spaghetti Western
SHARE
Facebook
Twitter
The weekends in the Stockyards after the Fort Worth Stock Show and Rodeo closes in early February have that lonely the-traveling-carnival-has-come-and-gone feel, with small groups of bored-looking teenagers and even more bored-looking security folks ambling around the grounds like they were waiting for the next 12 months to hurry past so the crowds will return. 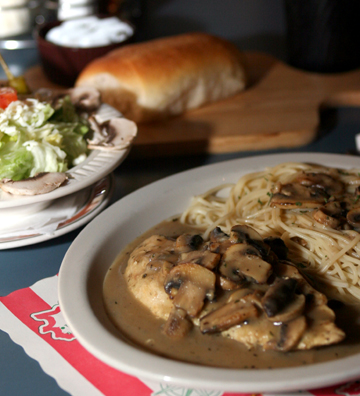 The post-stock show blues seemed to hang around Giovanni’s Italian Restaurant on a recent Sunday afternoon, when only one table in the small dining space was occupied by customers. The servers seemed to be in a generous, chatty mood, maybe even working at it a little to compensate for the near-emptiness of the room, a 50-50 mix of Cowtown and Italian kitsch. String-laden Italian ballads and photos of the leaning tower of Pisa made an interesting contrast to the cowboy-hatted head shots autographed by riders and rodeo celebrities. The food proved solid, if not much more memorable than the portraits that lined all four walls, peering at diners from above like a Roman court.

It’s a mystery waiting to be solved why so many Italian establishments regard salads as, at best, an afterthought and, at worst, almost a nuisance when compared to the carb-ier, saucier fare in which those restaurants specialize. Giovanni’s was only slightly better than average in this department. The artichoke salad earned points for actually containing a lot of sliced, vinegary artichoke hearts, and the mixed romaine and iceberg leaves as well as the bright red tomato wedges were fresh. But the pitted and sliced black olives and the too-numerous pepperoncinis — those face-contorting, sour pickled yellow things — made the whole thing seem “fresh from the can,” so to speak.

Much, much better was the chicken primavera. Thick noodles hugged a mess of formidable, tender zucchini and squash slices, black olives, onion, and firm strips of baked chicken breast with a tinge of paprika spark. It was held together with sinful relish by the Southern Italian specialty known as pink sauce, the dense and tangy combo of marinara and Alfredo that rarely fails to delight.

The veggie calzone was a mini-performance event as well as an entrée. It arrived swollen like some alien pod, the light-brown surface of the pastry exterior shiny with olive oil and the edges expertly tucked together. Stick a knife or a fork inside, and the steam rushed out as from an impatient tea kettle. Deflated down to edible size, the calzone turned out to contain a luscious, stringy core of provolone with spinach, onions, and sliced mushrooms (again, those over-marinated wet buggers from the little grocery jars). A chunky marinara sauce ran sidecar for dipping.

The hot sausage parmesan sub was serviceable if not spectacular. On the plus side, the bread was fragrant and spongy, not the baguette variety that cracks when you bite into it and sends crumbs like flecks of drywall down your shirt. The juicy pork sausage was flecked with zesty fennel seeds, but the flavors in the tomato sauce were oddly mushy, with only a sweet-ish aftertaste to report.

Giovanni’s also serves a variety of pizzas, offers free delivery within a limited area, and vigorously encourages patrons to bring their own beer and wine. If goodwill and fresh ingredients alone were the litmus test, the place would be turning ’em away regardless of the events season. But the Cowtown pizza and pasta scene is a crowded, competitive rodeo, and Giovanni’s should consider mastering a few more culinary tricks if they really want to rope the customers in day in, day out.