In 2003, a little-known Arlington comic-book artist began publishing a series about a teenager who comes back from the dead to fight evil. 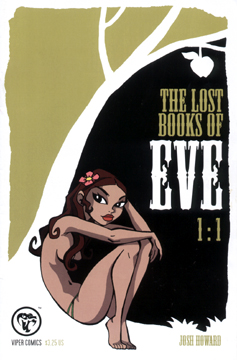 Four years later, Dead@17 has become a cult favorite, and the mainstream is taking notice of Josh Howard (no, not the Dallas Maverick) and his publisher, Viper Comics. He recently expanded his one-shot to include sequels, prequels, and a monthly series — and there’s a film adaptation in the works, with Reveille Productions, producers of The Office. The 30-year-old Howard also has done more titles, most notably Lost Books of Eve, worked with heavyweight DC Comics, and, perhaps most significantly, is being recognized by the comics community for having created a singular style, dubbed “Cute Girl.” Dead@17 started as a stack of 50 copies he made at Kinko’s. At the time, Dallas’ Viper Comics was just getting off the ground. Howard sent the company his material, and “they loved it,” he said. “And that’s how I got in.”

Howard, who grew up in the Panhandle town of Spearman and studied briefly at the Art Institute of Dallas, always wanted to get into comics. His entrée into panel storytelling, however, didn’t come directly from any specific titles. It came via Bruce Timm (character-designer of Batman: The Animated Series), J.R.R. Tolkein, C.S. Lewis, and horror-flick auteurs. The only title Howard regularly refers to is Hellboy. “I think [Hellboy creator] Mike Mignola is a genius at whatever he does,” Howard said. The Arlingtonian indeed wears all of his influences proudly. His characters are cleanly drawn and highly stylized, and there’s a lot of shadow to his work. The fantasy and biblical elements of both Dead@17 and Eve can be traced directly to Lord of the Rings and The Chronicles of Narnia. Howard’s “Cute Girl” style is also evident in his other work: the job he did for DC, drawing Andi Watson’s graphic novel Clubbing; one of his popular previous titles, Black Harvest; the two books of artwork he’s published; and his contributions to the anthology, Josh Howard Presents: Sasquatch.

Not surprisingly, Howard begins with an image and lets his storylines flow from it. “With Dead@17, it was a schoolgirl wielding an ax,” an iconic image, he said, that perfectly lends itself to a backstory. You might say Dead@17 has become Howard’s bread-and-blood-er, but he’s found time now to devote to his other recurring title, Eve. Howard generates income primarily through the sale of his artwork and comics. He prefers the independent comicmaking lifestyle, especially after his time with the big boys, DC and Marvel. “From my experience, the Big Two are very editorial driven,” he said. “They list things they want to see, changes, et cetera. It has a way of almost wearing you down. It’s like you’re not writing the book sometimes — they are. Going from Dead@17 to Clubbing, from where I was calling all the shots to none of them, it was a big shock.” He also considers himself part of a rebellion against mainstream comics. “The comic industry as a whole would benefit from more fresh ideas and creators as opposed to a rehash of the same old thing over and over,” he said. However, he wouldn’t be averse to tackling some traditional, established titles, especially Supergirl. “I’m too focused on my own thing, and I’m really happy where I am,” he said. But Superman’s sister, he said, is prime to be revamped. (In his “Cute Girl” style? He didn’t say.)

Howard just returned from the annual San Diego Comic Convention, the biggest trade show in the business, where artists, writers, and producers interact with fans. “I get my best feedback [there], and it blows me away to see how many people read my stuff,” he said. “Normally, I’m stuck in my house and don’t get a sense of how many people” have become fans of his art. One fanboy, Howard recalled, approached his table, “threw his arms down” and said, “‘Tell me I’m not your biggest fan!” His arms were covered in Dead@17 tattoos. His appearance at the gathering was his fifth in five years. It was great, he said. He sold out of one of his art books — Other Girls, his latest — on the first day, and filmed an episode of Beauty and the Geek, a popular show in which intelligent yet dorky guys are paired with beautiful yet superficial women. Howard’s comics will be featured on an upcoming episode. On Howard’s immediate agenda is a show of his work, Saturday, at Lone Star Comics in Dallas (6465 E. Mockingbird Ln., 214-823-0934). Doors open at 5 p.m. After the show, he said he’s going to spend time with his family — wife Laura, 9-year-old son Luke, and 7-month-old daughter London. Persistence, in the comic industry, Howard said, pays — “I mean, if you want it bad enough you can get it. It’s just a matter of time and practice.” Visit JoshHoward.net. — Cole Williams

Told You So
When you’re on the ball, you’re on the ball, and what can I say: I’m on the, uh, ball. Anyway, as I predicted in these pages, lo, these several months ago, the Modern’s Ron Mueck show may go down in history as the museum’s most successful and lucrative to date. Granted, everyone in the world knew it would be a smash, but still: I’d like to think I’m, y’know, on the ball. And stuff. Last month, according to the Modern’s Kendal Smith Lake, was the museum’s biggest July ever: 31,000 visitors (which includes members and free-day folks). The previous record for July was from 2003, the reopened museum’s inaugural July: a laughable, by comparison, 23,000 visitors. If you haven’t been, you must go. If you love art, you must go. If you hate “that modern crap,” then you really must go. There’s something for everybody. Mom will love the craftsmanship that goes into the artist’s startlingly lifelike figurative sculptures. Pops will like watching the video in which Mueck’s laborious, painstaking artmaking process is documented, from conception to production — who says artistes are afraid of getting down and dirty and usin’ a little elbow grease? Watching the Aussie and his sole assistant spend months shaping and forming and painting and detailing the sometimes gargantuan, sometimes petite sculptures, you’d think the survival of Western civilization (or at least capitalism) depended on them. For Little Suzie and Little Bobby, there’s the sheer comedic force of the work. Imagine Barbie as big as a mini-van and hairy. And a dude. A middle-aged dude. And for you, my art-loving friend, there’s the contextual pleasure of experiencing the main and oft-ignored tenet of good contemporary art: communication. The show runs through Oct. at 3200 Darnell St. Call 817-738-9215. — Anthony Mariani