Alan Jackson may be one of a few current country music stars whose careers will last longer than a frozen margarita or one of those fruity drinks with umbrellas. 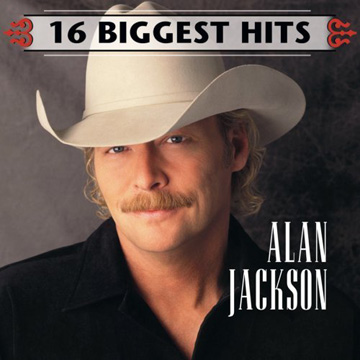 He’s got the caramel-smooth voice and the quiet presence, and he gets almost as much respect from Nashville outsiders as George Strait. His latest, 16 Biggest Hits, is pure country but has a populist vibe that explains Jackson’s inimitable crossover appeal. All 16 tracks here made it to No. 1, 2, 3, or 4 on the country charts, and half a dozen were top-50 in pop. On “Midnight in Montgomery,” a haunting paean to Hank Williams, Jackson and one of his co-writers do the obvious with subtlety. Elsewhere, like on “Don’t Rock the Jukebox,” Jackson and company sate their jones for George Jones, not the Rolling Stones or any other rocker, mainly because the singer’s baby is gawn.

There is heartbreak, of course. In “Here in the Real World,” one of several songs that deal with faded love, he wishes that, “like in the movies,” cowboys wouldn’t cry, heroes wouldn’t die, and love would be a sweet game. Jackson slips easily into the demands of the song. He is as believable singing about how he wishes his dog would never die as he is limning the economic plight of the “little man.” The Georgia native’s songs here come from eight albums released between 1990 and 2002. They are consistently listenable, beer-drinkin’-kinda songs, even if the beer is calorie-conscious instead of full-bodied.-Tom Geddie