Home Calendar Big Ticket Lone Star Movie Stars
SHARE
Facebook
Twitter
It’s finally here, ladies and gentlemen. After years of a cultural scene without a film festival to its name, Fort Worth finally gets back on the horse when the first Lone Star International Film Festival takes place downtown this weekend. (Full disclosure: Night & Day will be serving as a member of the jury.) 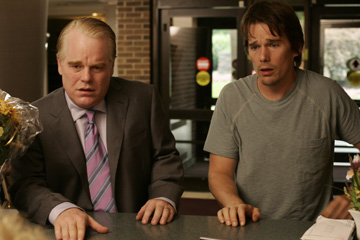 Among the 80-odd documentary and narrative features are some mouth-watering offerings such as Sidney Lumet’s widely talked-up heist movie Before the Devil Knows You’re Dead, with Philip Seymour Hoffman and Ethan Hawke; Paul Schrader’s thriller The Walker, starring Woody Harrelson as a gay escort for society ladies in Washington; and James C. Strouse’s Grace Is Gone, which is generating Oscar buzz for John Cusack as a father of two whose wife is killed in Iraq. If stars on the screen aren’t enough for you, a fair number of them will be here in person — Martin Sheen, Robert Rodriguez, Keith Carradine, and Fort Worth natives Bill Paxton and T Bone Burnett will all make personal appearances and receive honors for their work.

In addition, the festival will offer several “sidebars” on Hungarian film, the recent trend of low-budget dialogue-driven movies called “mumblecore,” and Latino films that will screen at Rose Marine Theatre, hosted by Cowtowner Julio Cedillo. Panel discussions will cover subjects ranging from local technology to filmmaking in Fort Worth to the upcoming Jackass 2 1/2. Clearly the organizers of LSIFF have pulled out the stops for this inaugural event. Lucky us!

The Lone Star International Film Festival runs Wed-Sun at various locations in Fort Worth. Individual screenings are $6-12, passes are $50-295. Call 817-735-1117 for more information.