A couple of years ago, Tyler Rougeux had a transformative experience. 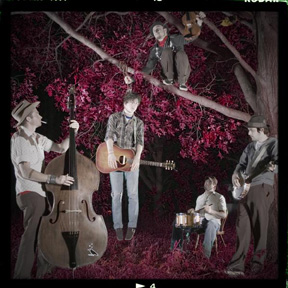 To outsiders, he might have simply been working in a music store. But in Rougeux’s mind, he was earning an unofficial degree in music philosophy, his teachers a bunch of dead musicians, courtesy of the storeowner’s impressive collection of folk, country, and bluegrass offerings. The result was the Whiskey Folk Ramblers, an amalgamated trad-country band that Rougeux now fronts. “The owner sold used cassettes and CDs, but he kept the vinyl behind the counter,” said the 22-year-old Rougeux (pronounced roo-SHAY). “He’d only sell it to certain customers, people he had conversations with, customers who convinced him they knew about the musical greats.”

In addition to receiving daily doses of Woody Guthrie, Ramblin’ Jack Elliott, and Django Reinhardt, Rougeux found himself herding the proprietor’s cats, who considered themselves the rightful owners of the place. “It was just me by myself taking care of the cats, the customers, and the whole business,” he said. The conflicting demands on his time didn’t keep him from becoming fascinated by the lonesome, idiosyncratic, and sometimes-mystical leanings of so-called “roots” genres from around the globe and especially from the U.S. of A. Music had always been a large part of his life. He and old friend and fellow Rambler Richard Lee Johnson, both Fort Worth natives, had been playing guitar and piano together since grade school. Rougeux sang in a punk band in high school, back when his pantheon of gods included The Clash, The Ramones, and The Cramps.

But he was eventually overtaken by his on-the-job exposure to the exotic fleet fretwork of guitarist Reinhardt, the Old Testament-flavored, mythic imagery of bluesman Robert Johnson, and others. Rougeux’s stint at the store drove him — and, by osmosis, his buddy Johnson — to read up on this new/old music that so absorbed them. “The way some fans keep up with what’s going on currently with their favorite [contemporary] bands, we researched what had gone on in the lives of these artists,” Rougeux said. “We read about the people who [achieved success], and the people who didn’t, and the times they lived in.” The ancient musos were seemingly dead to everyone except for scholars and cultists — and Rougeux and Johnson. “We wanted to play a part in re-revolutionizing this music,” Rougeux said. “We thought people should be hearing the kind of music that they weren’t hearing many places today.”

After months of practice and a couple of personnel changes, the Whiskey Folk Ramblers played their first show in September of ’06, with a steady lineup: frontman Rougueux on mandolin (one that had belonged to his grandfather), acoustic guitar, and harmonica; Johnson on banjo and accordion; Jeremiah Christensen on fiddle and lead guitar; Jackdaw Russell on upright bass; and Trey Ownby on drums. They’ve all been musicians for most of their young lives, if not always in the rarefied field of the troubadour, where they are now toiling. But as anyone who’s seen their live shows can attest, the Ramblers are remarkably relaxed and confident, even verging on virtuosic, with their gentle, punchy, and occasionally otherworldly blend of what might be called wayfaring music. Harmonica lines echo the ’60s folk revival, banjo picks and plucks evoke the hillbilly nights of Prohibition, and the cool thump and thud of the upright bass recall the shoegazers of ’50s jazz clubs. The Whiskey Folk Ramblers wander not just through different styles but also across distinct eras.

The band’s sound was an organic evolution that Rougeux can’t quite explain. “We started off as pure country, then headed toward folk and bluegrass,” he said. “When we introduced the mandolin and the accordion into the band, we started having this gypsy-klezmer vibe.” Rougeux eschews the temptation to create any kind of exotic backstory for the Ramblers. “We don’t claim to be gypsies,” he said with a throaty laugh that suggests his ongoing love affair with bourbon and cigarettes. The real gypsies earned their money the hard way, he noted, as outcasts from Romania and Spain and India who brought their strange ways, frequently bad reputations, and glittering string- and percussion-based songcraft to points across the planet. Being a little more than a year old, the Whiskey Folk Ramblers are concerned with cultivating a local fan base before thinking about the Big Time. They have recorded an EP, but none of the guys in the band is satisfied with it. Their first full-length CD — 12 originals, plus an instrumental intro inspired by the Spaghetti-Western scores of legendary film composer Ennio Morricone — is due out in mid-December. The Ramblers recently re-recorded the entire album and, in the process, discovered — somewhat ironically — a certain kind of perfectionism in the pursuit of rawness.

“The first recordings [of the new album] were done with each member recording his part separately,” Rougeux said. “It came out with a sound that was too studio-polished. We’re not interested in crappy garage-band ‘authenticity,’ but we decided if we didn’t sound like ourselves live, the CD just didn’t sound right.”