Home Music Listen Up Sawed Off Sick
SHARE
Facebook
Twitter
For a band that describes its origins as “from the depths of hell,” Dallas psychobilly outfit Sawed Off Sick writes some surprisingly singable and poignant tunes. 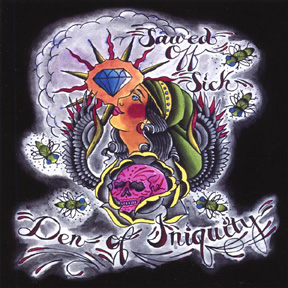 On the trio’s recently released third album, Den of Iniquity, frontman Nickatomic’s pristine growl dovetails nicely with the thick tones he reels out of his Gretsch guitar. Also, instead of harping on the genre’s often-silly stock themes (like necrophilia, or – oh, I dunno – snowstorms of ashes), SOS prefers to nod to the ancient blues. On “Damned Infatuation,” for example, Nickatomic sings about pulling the plug on a new relationship. His delivery is brash and punkish, but his attitude is purely defeatist.

Driving hard and playing with great precision, SOS drummer Rob Heartthrob sets the head-banging pace. His rolls and crashes barrel ahead, as if he were trying to leave the rest of the band – hell, the rest of the song – in the dust. Chris Parrish is game on the upright, plucking at and slapping his bass like an angry loan shark putting the squeeze on a deadbeat. Toward the homestretch of the disc’s 12 tracks, the tempo picks up and never falls off. Serious, flashy surf-guitar riffs rattle through “Psycho Surf,” and, a few minutes later, on “Hell Tonight,” the haunting, calming bass groove that kicks off the song quickly comes across a catchy chorus that leads to a turbo punch. The backing female harmonies lend the proceedings a sexy, fiery luster.

The breakneck thrash throughout the disc would seem to contradict Nickatomic’s mostly sincere and mature lyrics, but SOS somehow manages to make the dueling forces work. Even for music fans not partial to psychobilly, Den of Iniquity is at least intriguing – it’s not often you get to listen to anthemic zombie-surf arena-rock; far less often when the tunes manage to stick in your head, as Den of Iniquity’s may. – Caroline Collier