Southeast of downtown, in the rundown neighborhoods where Fort Worth’s homeless shelters are hidden safely out of view of the Sundance crowd, Steve and J.D. Christian found a welcome respite last weekend from their day-laboring and train-hopping – or rather, it found them. 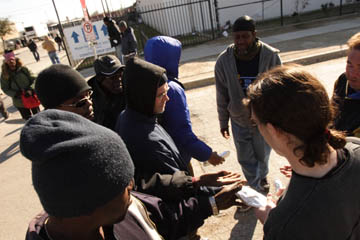 Just off the train from Shreveport, the brothers, who have rambled around Texas and Louisiana for two years since Hurricane Katrina, always on the lookout for work, food, and a roof over their heads, made their way to the Presbyterian Night Shelter, where they found beds but were too late for dinner. It looked like it was going to be a long, hungry time until the shelter served out dinner the next evening.

But on Sunday afternoon, Steve and J. D. were treated to a small but welcome change in their depressing routine: two burritos for the brothers, and one each for hundreds of other homeless folks around Lancaster and in other parts of the city. The Louisiana pair flashed grins that cut through the blistering north wind, exposing what few teeth they have left in their weatherworn faces. “It’s great, just great. Truly a blessing,” said Steve, whose 47-year-old face was peeling so badly he could have easily passed for someone 20 years older. “We’re just a couple of good ol’ boys looking for work, so it’s real nice they’d do this for us.”

Even more surprising for the East Lancaster brunch crowd, the burritos didn’t come with a sermon, a day of backbreaking labor, or a jail cell. They came instead from a small fleet of bicyclists and folks in trucks and a couple of cars that rolled along block after block, stopping repeatedly to hand burritos to anyone who wanted them. After that, the group gave repeat performances in several of the city’s more downtrodden areas: the North Side, the Hospital District, and up and down Jacksboro Highway. The Burrito Project is now in its fourth week in Fort Worth. The group of about 15 people cook up burritos at their homes, meet up, and pass them out. They are self-funded and recruit other would-be do-gooders only by word of mouth. 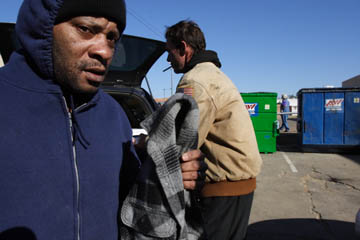 These burrito bandidos don’t resemble most charities – there’s no stationery, no mass-mail appeals for funding, no one collecting donations on street corners. In fact, they’re something of a secretive bunch. Technically, what the Burrito-ans are doing is illegal. They don’t have any health or vending licenses, and their home kitchens have not been inspected by the city. They don’t have a manager, a spokesperson, a coordinator, or any of the usual trappings. It pretty much works cell phone to cell phone, with a little help from their myspace page. Though their origins are something of a mystery, The Burrito Project “chapters” have been popping up all over the country, in cities from Los Angeles to Anchorage to Detroit to Miami. A project in Dallas is also in the works. Because of the lack of structure and formal organization, there’s no telling how many groups exist. “There could be as many as eight separate burrito projects operating in Fort Worth right now,” said the clandestine burrito donor, who asked to be anonymous so as not to tip off the Fort Worth Police Department’s anti-burrito task force. New burrito hand-out groups “may be inspired by our [myspace] page. I don’t know, but I hope so.”

According to their page, the lack of structure is intentional and designed to illustrate how easy it is for anyone to get involved in feeding the hungry. “The project is not a solution, it is a step-by-step do-it-yourself outline for a way to get involved,” the site says. “The project is there for you to expand. Each branch of the burrito project in each city is independent of the others. The mission is to inspire other burrito projects to develop organically.” Our hometown burrito liaison said that, for volunteers, handing out their wares puts a human face on the homeless problem and is more of “an extension of our dinner table” than a charity, though they also pass out bottled water, socks, and other clothing.

So why give away burritos and not the more traditional soup or beans in a can? For one thing, it’s hard to carry a backpack full of soup when you’re on a bike. But more importantly, as Fort Worth Weekly’s contact in the contraband burrito world explained, burritos are easy to make, easy to transport, a significant upgrade from normal shelter food in terms of taste, and chock-full of nutritional value. On this particular Sunday, two of the volunteers spent the morning rolling their downright gourmet creations with beans, corn, onions, and a hint of jalapeño. All told, Cowtown’s burrito cell manufactured and passed out close to 400 of them, almost doubling the previous week’s output.

Based on the response, the burrito parade, which moved at a funereal pace as a result of being led by the bicyclists, was a welcome change from what the homeless folks along Lancaster Avenue and elsewhere were used to. As the brigade arrived in each neighborhood, the effect was like stepping on an anthill: Dozens of hungry, cold people came from out of the woodwork to get fed. Prentice Perry, whose only home over the last eight years has been the occasional jail cell, said that the last thing he had eaten before his burrito was a mouthful of concrete, after two Fort Worth police officers roughed him up. He acknowledged both the effort and the danger that The Burrito Project folks put themselves through.
“We really appreciate it,” said the 46-year-old. “It’s rough out here. There’s crack everywhere, prostitution, sex offenders, cops that beat your ass just because they can.”

Shane Dawson, 38, who has been on the Fort Worth streets for three years, agreed. He said that except for Tramp Day – what the homeless call the day each week, usually Saturday, when local charities come to hand out food, water, clothes, and other essentials – he feels the homeless are ignored in Fort Worth or swept under the city’s rug. “They’ve forgotten us down here,” he said. “What [The Burrito Project] does is a blessing from God.”