Home Arts Art Processions
SHARE
Facebook
Twitter
I must have been breathing heavy or something, because during the opening party last weekend for Tasty Bits, a group show at Gallery 414, the elderly gentleman whose gray noggin and hunched shoulders obscured my view of a certain piece turned to me, smiled, and said, “I’m just trying to figure out how he did it!” 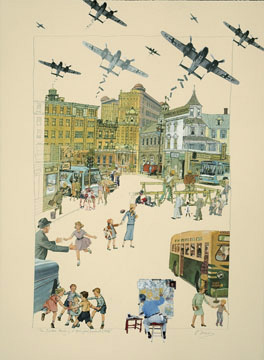 I was about to lay a boozy, rambling art tutorial on Pops, but then I leaned in and took a closer look at the thing, Paul Greco’s startling narrative collage “The Junker Bombing of Arlington, Virginia (1943).” Hell if I wasn’t stumped too. Some parts could have been scratched out by hand, others found and glued on. There really was no telling, just as there really wasn’t any telling how most of the other Bits were made. “Process paintings,” the loose term for two-dimensional artworks that, like most sculptures, derive their force both from what they say and how they were produced, date back to early Modernism. But I can’t recall ever seeing so many of them – and so many good ones – in the same room at the same time. Happy accidents or not, the process paintings and the rest of Tasty Bits will be up for only about another month.

In Greco’s case, he “did it” very carefully. A joyously busy mix of collage and drawing, “The Junker Bombing … (1943)” depicts a bustling town square appointed in the era’s, um, square trappings over which the Luftwaffe roars, spilling bombs on the mostly preoccupied townsfolk below. There to capture it all is legendary photorealist Norman Rockwell, seated with his back to us at an easel at the bottom of the tableau, an overt visual quote of the late master’s “Triple Self-Portrait” (1960). A perverse glee charges the harrowing delirium – death looks good on the benighted. The preponderance of beiges, grays, and fatigued primary colors coyly reinforces the players’ fatal indifference to the falling sky.

One tasty bit is sort of about process painting. “Strip,” by the exhibit’s curator, Dallas’ Erik Tosten, is an animated slide show of white, squat, seemingly functionless architectural structures that materialize on a bright red background, somewhat magically, truss by truss and wall by wall. Once a structure or section completes itself, it gracefully slides leftward off-screen and is replaced by a new structure or section. And onward the tranquil assembly line flows. Almost as perplexing as Tosten’s purposeless forms is his chosen medium. You know a computer is involved, but you’ve probably never seen one perform so calmly and soothingly before.

Some Bits are almost entirely dependent on their processes. Jen Rose’s simple, organized geometric patterns in paint and flocking on bookcloth would lose a lot of their enchanting minimalist romanticism were they just etchings on paper or acrylic stencils on canvas. The soft material, gilt flock on canonically drab backgrounds, and portable scale invoke cinematic – and literary – notions of musty old libraries and their musty old tomes, musty old mahogany reading tables, and musty old stewards. John Lewis’ “Break in Procedure,” a triptych of sorts, also argues convincingly on behalf of its treatment. The three thin, small, curvilinear ceramic sculptures comport themselves as playfully as Legos. They’re hung horizontally to form two eyes and a nose, composed of dozens of different-sized interlocking chips, and painted in assorted combinations of red, black, gray, and white.

Steve Cruz’ two entries and two of Harmony Padgett’s represent the best and worst of process painting. Both of Cruz’ brightly colored panoramas are divided into about a dozen equally sized squares, each square about the size of an album sleeve and containing an edge of what appears to be a puzzle piece – the resulting text tauntingly dares you to try to decipher it. Padgett’s drawings, though, beg for context – they look like Paul Bunyon’s fingerprints or rubbings of a gravel driveway. Perhaps there’s an interesting story behind them. As they are now, they’re eminently forgettable.

Ironically, Padgett delivers the best in show, “One State of Desire,” a large oil painting on a square expanse of blond wood whose surface is lacerated by waves of shallow valleys and dissolves into fading splotches of ultramarine and white, with quiet streaks of sienna, tastefully referencing both Calder (circa the Atomic Age) and Diebenkorn’s Ocean Park series.
Rounding out Tasty Bits are Takeki Ishihara’s screenprints on canvas, Takako Tanabe’s unassuming drawings, and 414 co-owner John Hartley’s hyper-realist figurative oil paintings. Ishihara’s pieces, in which swirling clusters of organic shapes in gray and pink billow across solid black backgrounds, are intoxicating but no better or worse than cool indie-rock band fliers. Tanabe’s collection of small, square works in graphite and colored pencil, with their feigned demureness, compare favorably to doodles, and Hartley’s mini-opuses seem predisposed to invite head scratching: not because oil on canvas is a novel medium but because few painters can pull off astoundingly lifelike recreations of photographs of weathered knick-knacks and children’s toys. John Hartley is one, Norman Rockwell another. 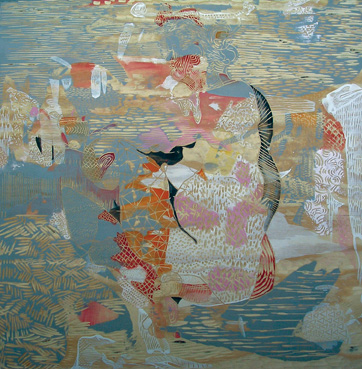 Excessive Opening
I’m really digging the theoretical underpinnings of That’s Not Art!, a multi-media event whose organizers say will “question what is art and what isn’t.” Taking place Saturday at F6 Gallery, a functional warehouse-like space in an coolly distressed office park on West Division Street in A-town, That’s Not Art! will include work by Brent Frishman, Joyce Martin, Kris Swenson, Lori Thomson, and a few other visual artists, plus music by North Texas’ Zanzibar Snails, c e re b oso, JinMenJu (the nom de guerre of sound artist Terry Horn), and Yanari (Horn and Mark Cook). Visitors and the artists also will be invited to create their own works out of a “stockpile of household items there.”

So who’s to say what’s art and what isn’t? Simple: Larry Gagosian and Charles Saatchi, Artforum magazine, or the deans of the MFA programs at RIT, Yale, and RISD. Bada-bing, bada-boom. End of discussion. Seriously, though, I’m all for polishing gently used hot buttons. Visit www.myspace.com/f6gallery or go to the public library and check out But is it Art?: The Spirit of Art as Activism, a collection of essays edited by Nina Felshin in 1994. Good stuff.-Anthony Mariani