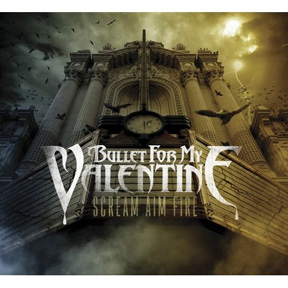 Whatever the case, BFMV works itself around the genres of metal, screamo, emo, and power balladry with smooth transitions and gas in the tank to spare. The influence of the early-1980s thrash scene, particularly pre-MIA Metallica, announces itself from the first two songs, the title track and “Eye of the Storm.” Harmonizing metallized guitars clear paths for chugging rhythms and melodic yet hefty vocals. The third track, “Hearts Burst Into Fire,” is a gem of familiar emotions and distinct musicianship, combining fluid, Scorpions-style fretwork with The Foo Fighters’ brand of thick, radio-ready choruses.

But then things threaten to unravel. “Waking the Demon” is a blatant rip-off of an Avenged Sevenfold song, with BFMV aping the OC band of ‘roided-up goth-poppers in eyeliner and tribal tattoos. But this gross error in judgment goes as quickly as it comes, highlighting the fact that, with every backward-ass step here, there is a redeeming progression. “Say Goodnight,” for example, is as good as power balladry can get. (Think: less vengeful versions of ‘tallica’s “Fade to Black” or Pantera’s “Cemetery Gates.”) Though BFMV fucks up at the end by adding growling vocals a la some immature “metal” bands whose names will go unmentioned, the Welsh lads nevertheless deliver three and a half minutes of perfection, which is more than can be said for the rest of what passes for “nü metal” out there.-Justin Press