There’s not a bad seat in the house at the “Old Vic,” Stage West’s new, old digs at the industrial end of West Vickery Boulevard. 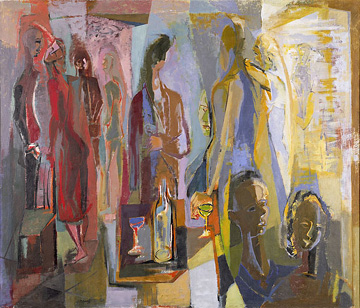 But the venue does beg the question: Can all of those clear sight lines and crystalline acoustics make a trifle of a DELETE like Sarah Ruhl’s The Clean House seem even sillier than it is? Sunday’s matinee performance had so much going for it: the gleaming white domestic set, an adroitly comic cast of mostly female performers guided with a rhythmic drollness by director Jim Covault, and a beguiling first act that left no hints as to the ultimate destination of this show about four women negotiating the emotional compromises they’d made in their personal and professional lives. But The Clean House, a 2005 finalist for the Pulitzer Prize, gets stuck in a very deep ditch, and it only sinks deeper as the playwright spins her wheels frantically in an attempt to conjure up comedy and pathos.

Mathilde (an arch, philosophizing Emily Scott Banks) is a Brazilian émigré who has come to work as a housekeeper at the home of two long-married middle-aged doctors, Lane (Judy Keith, who soars highest when she’s most emotionally crippled) and Charles (Bill Jenkins). The trouble is, Mathilde – a wannabe standup comic – hates cleaning, preferring to spend her time trying to devise “the perfect joke” and wondering how her mother managed to literally die of laughter back in her native country. Lane’s sister Virginia (a radiant Pam Dougherty, nearly worth the price of admission herself) is a morbid, compulsive cleaner who finds a kind of soulmate in Mathilde. Rounding out the ensemble is Sylvia Luedtke as Ana, an intruder into Lane and Charles’s marriage who mysteriously manages to unite the show’s four women around a kind of divine secret of the ha-ha sisterhood: a joke, told in Portuguese, that’s so funny it will kill the listener with spasms of laughter.

The Clean House mixes a sort of tragic, Chekhovian naturalism with light elements of theater of the absurd. Ironically, the skilled cast winds up revealing the play’s biggest secret – there’s a whole lot less going on here than thirtysomething playwright Ruhl thinks. The show disintegrates into discordant, ridiculous pieces well into the second act. By the time Jenkins appears near the end, toting a giant fake yew tree, you’re busy trying to think of a dramatic vehicle more respectful of the female stars’ talents.
– Jimmy Fowler

The Circle Is Unbroken
Fort Worth Star-Telegram founder Amon Carter built his collection of Western art in the mid-1900s, when he was the city’s biggest cheerleader and benefactor. The man loved his art. He loved Fort Worth even more. Yet in his zeal he somehow overlooked a local group of Modernist painters leading Texas into a post-cow, post-bluebonnet era of freaky exuberance that would eventually attract fawning New York dealers to town. Ignorance of local artsy-fartsy types is no knock on Carter – few people gave a darn about this adventurous circle of a dozen young artists who liked to hang out, paint, mythologize, etch, smoke, drink, play music, dance, act, debate, and dicker all night long in the uncertain 1940s. Even after big-city dealers came cheek-kissing the artists, few people at home noticed, although one local proponent was none other than Amon’s daughter, Ruth Carter Stevenson.

But now, 60 years later, the secret’s finally out. Opening on Saturday at the Amon Carter Museum is Intimate Modernism: Fort Worth Circle Artists in the 1940s, a retrospective of the group that will be on display until May 11. Though most members of the Circle are dead, two who are still kicking – Kelly Fearing and George Grammer – will attend a private party at the museum on Friday.

These days, Circle artists are hotter than an Abilene plein air excursion in August. Paintings and prints are fetching record amounts of greenbacks at auctions, as collectors scramble to grab what’s left on the market. Knowledgeable collectors have been lauding Circle artists for years, but during that time you’d have been lucky to catch a glimpse of the works at the Amon. Now the museum has done a reverse twist. The show features choice and sometimes trippy stuff by Dickson Reeder, his wife Flora Blanc Reeder, Bror Utter, Cynthia Brants, Bill Bomar, Lia Cuilty, and the rest of the gang. Over the next couple of months, Intimate Modernism also will offer several lectures, including an overview on collecting the artists, hosted by exhibit curator Jane Myers and Scott Grant Barker, the most knowledgeable dude alive when it comes to early Fort Worth artists. The accompanying catalog, which includes dozens of color reproductions, can be purchased at the Amon Carter bookstore for $40. A limited edition copy, which includes a restrike print of a plate by Dickson Reeder, is available for $350.

The exhibit, said Circle collector Morris Matson, “should be the most spectacular showing of works of Fort Worth artists to ever be put together.” Don’t expect Western themes. “These people had great imaginations. They were music and drama people, well-read and well-traveled, portraying an art that was based on imagination,” he said. One of the most fascinating aspects of the exhibit is the large number of portraits and party scenes of Circle artists as interpreted by their peers – Dickson Reeder painting Bomar and Veronica Helfensteller, and Bomar painting Cuilty and both Reeders. Myers is pleased that some works will be making their first public appearance since their creation. “Together, the works will reveal a fascinating story of vibrant and vitalized collaborations and friendships, and they will tell the tale of how progressive art came to Texas,” she said.

Heck, ol’ Carter himself is probably smiling. After all, it’s surely been annoying getting ribbed by the Reeders and their ghostly buddies up in heaven for the past few decades: “Geez, Amon, among all those cowboy and horsie paintings you got, you couldn’t have shelled out a few bucks for paintings of dancing amoebas and card-playing centaurs?”
Visit www.cartermuseum.org for more information or go back and read the Weekly’s cover feature about the Fort Worth Circle, “Wanna See My Etchings?” (April 11, 2007). – Jeff Prince

Jazz Ballet?
When was the last time you went to the ballet and heard a jazz concert? Probably never. But then again you might not have seen Texas Ballet Theater artistic director Ben Stevenson’s latest romp. Jazz Royalty, a cabaret-style program, features veteran singer and British Dame Cleo Laine and seven guest musicians. At the premiere last weekend at Dallas’ Majestic Theater, Laine and company celebrated a whole evening of jazzed-up pop tunes from days gone by, with the dancers settling for supporting roles. Songs by Vincent Youmans, including “It’s Gonna Be a Great Day” and “Sometimes I’m Happy,” Cole Porter favorites “From This Moment On,” “My Heart Belongs To Daddy,” and “Love For Sale” joined a medley of Duke Ellington compositions and many less familiar numbers.

Stevenson and assistant Tim O’Keefe have created a seamless flow of movement for the dancers, who drifted on and off stage like shifting scenery. Toe shoes and tutus were dropped in favor of short black dresses for the women and black t-shirts and slacks for the men. There were solo moments to be sure: a poignant duet lovingly danced by Leticia Oliviera and Lucas Priolo to the tune of “Two For Tea” and another set to “Misty,” romantically performed by Jayme Autrey Griffith and Carl Coomer. Lonnie Weeks and Priolo also had introspective solo moments.

But the evening belonged to the 80-year-old Laine, who is still going strong. Time has taken some of the top notes from her extraordinary range, but her velvety smooth bass is sill intact, as is her luminous middle register, which she uses to great effect. And her agility in getting from note to note in jazz improvisations seems unimpaired. The real surprise, though, is hearing her effortless, long, sustained notes, one of the first things to go in older singers. (Beverly Sills shared with me shortly after she retired that “I can still hit the high notes, I just can’t hang on to them anymore.”) Only the slow, cautious shuffle with which she moves onstage belies any age.

Few singers inhabit a song as compellingly as Laine does. Her take on the wistful “He Was Beautiful” was heartbreaking, and in the final lyric to “Lies of Handsome Men,” she adopted a halting delivery that made for a sly wink: “But I need to hear the lies of handsome men.” The 24 dancers and eight musicians looked cramped on the Majestic’s small stage. When they come to Bass Performance Hall this weekend, they’ll have a lot more room to roam. – Leonard Eureka