It’s been four years since singer-songwriter April Geesbreght released her last CD, the introspective, folk-inflected In Other Words. 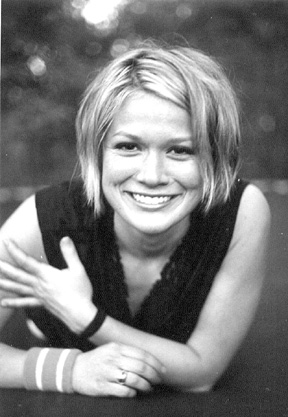 In that relatively short period of time, the 26-year-old officially entered adulthood: She earned her bachelor’s degree from Baylor University, moved back to Fort Worth to live near her family, got a full-time day job, and married her high-school sweetheart. “I kind of fell out of the music loop,” said Geesbreght (pronounced jez-bray). “There was a whole year when I didn’t write or perform at all. A couple of my band members joined other groups. I was working five or six days a week. I was thrilled with married life. I was happy, but I was exhausted.”

But making music, which she’d been doing since adolescence, was still inside her. Early last year, Geesbreght forced herself back into the game. She had saved enough money to record what she hoped would be the most professional album of her young career, one that would help her graduate from coffeehouse chanteuse to edgy, sonically literate pop musician. In May, she began recording with session players at producer Will Hunt’s Spaceway Studios in Dallas. But the timing was, to say the least, wrong. First, she was in a car accident that landed her, bloody and bruised, in an emergency room. A few months later, she was bitten in the face by her dog. The injury required 27 stitches and some minor surgical reconstruction.

“I was actually lucky,” Geesbreght recalled, now able to chuckle about it. “I could feel that his teeth had gone through part of my nose and my lip. So I just let him relax. If he had pulled back suddenly, or I had, the doctors said I would’ve lost part of my face.”

Her ghastly misfortunes only redoubled her determination to finish recording Big Fire, her new CD, which she will release in, of all months, April. Experiencing that many big changes – both happy and horrifying – made her realize that life deals its surprises fast and furious, so, she said, “I’d better get off my butt and do as much as I can with the day I’ve been given.” With her husband’s support, she quit her day job to book gigs and work full-time on the completion of Big Fire. Shimmering with electric guitars, keyboards, drum loops, and various digital sonic flourishes, the new songs represent Geesbreght’s desire to expand her repertoire to include more than acoustic material.

“With the chord progressions in my songs, I’ve always thought I could build toward a bigger sound,” she said. “I took [Hunt] a demo of 13 acoustic songs. He said, ‘April, these songs don’t have to be quiet folk songs. They’re strong compositions that could be performed in different styles by different people.'” Geesbreght was thrilled at the compliment, because she considers herself a songwriter first – singing is just the sweet icing on the artistic confection. One of her idols is Patty Griffin, who was immediately saddled with the confessional country-folk label that she has gleefully subverted via a variety of stylistic incarnations throughout her career. Geesbreght, whose vocals echo Griffin’s blend of innocence and sultriness, sweetness and muscularity, hopes her own musical evolution will take a similar series of unpredictable detours.

Right now, she’s on the hunt for a manager, preferably someone in Los Angeles or Nashville who can get her a licensing deal, shop her tunes to other artists, and maybe land her an opening slot on a marquee act’s tour. Aware of the seismic shifts in business models that the industry is undergoing, getting a major deal with a corporate label is not at the top of her list right now. A few years ago, Geesbreght met with a major-label rep. Although she refused to describe in detail the industry man and the meeting, you could hear the shudder in Geesbreght’s voice as she said, “Let’s just say I could feel that he wanted to strip me – in every way you can think of that word.” As a result, she said, “I’ve found a lot of creative courage, but I’m still a little afraid of industry people. I want to be able to own my own compositions, you know? And not just in a business sense. I’m afraid of someone stepping in from the outside and taking something away.”
For more information, visit www.myspace.com/aprilgeesbreght.