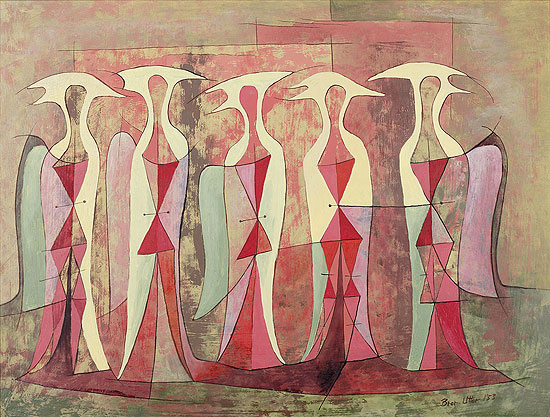 Blueberry to be exact. Just sitting there inside a glass cube atop a white pedestal, going uneaten – and unloved – beneath the Carnegie Art Museum’s overhead lights and in the joyless shadows of other, though decidedly less Minimalist works of contemporary art. Can’t recall the artist’s name. (Pillsbury? Crocker?) Seems like centuries ago now. The piece was already profoundly degraded when I came across it, some time in the late 1990s, when hucksterism in contemporary art was de rigeur. A handful of the era’s causeless rebels sooner or later surpassed their shtick: Damien Hirst, Tom Friedman, Karin Sander. The rest, though, like maybe the moldy-pie maker, evidently got shtuck in ruts, claiming space no one could see and cracking jokes no one could hear, all undoubtedly in an existentially charged, furious desire to call into question everything. Life, love, art, baked goods – you name it. The moldy-pie maker and his friends wanted answers, man!

Or maybe they just wanted their pictures in the paper. In any case, here’s what we do know: While the remains of perfectly good pies that do not eventually find our bellies usually end up either in the garbage or in doggie bowls, Mr. Moldy-Pie Maker’s confection – all of it – sat in a vaunted Pittsburgh museum for God knows how long. Probably months. Another factoid (or maybe an assumpt-oid): Throughout his life, Mr. Moldy-Pie Maker sacrificed a lot – time, money, love, food – to get himself in a position to even serve The Man, who in all likelihood just wanted a nice painting, not stale dessert. In other words, anybody can whip up a blueberry pie and let it rot. But only an artiste can whip up a blueberry pie, exhibit it in a major American art museum, and then let it rot.

The difference is crucial, though in the eyes of some Texans, especially North Texans, it is immaterial. A lot of paintings are not worth the canvas they sully, let alone hundreds of thousands of dollars. Similarly, a lot of paintings, like the ones hanging at the Amon Carter Museum as part of Intimate Modernism: Fort Worth Circle Artists in the 1940s, are more valuable than their modest price tags may suggest. But The Man rules the art world, and to most dealers, collectors, curators, auctioneers, glossy-magazine editors, and security guards, the difference – between an artiste and you and me – is everything. As it should be. Dealers et al. are The Man. Every person to whom a nice painting is not just a nice painting but an “item” or an “investment” or, Lord help us, a “C.V.” is a part of, for lack of a better word, The Man’s body: Dealers, auctioneers, and moneyed collectors are the brains; established artists are either the heart or the ass, depending on the quality of their work; and the critics, well, the critics are a hacking cough that just won’t go away.

Would any of Intimate Modernism’s art have looked like an attractive “investment” to the average heavy in London, New York, or Paris? I doubt it. But to a lot of us hayseeds, some of the work of Texas’ earliest known Modernists – Lia Cuilty, Veronica Helfensteller, Marjorie Johnson, Bror Utter, and others – is priceless, not just as quaint manifestations of painterly imagination unbound but as relics of Lone Star history. None of the Fort Worth Circle artists ever had his or her portrait on the cover of Life magazine. None of them were ever feted at the MoMA, nor have any of them ever been the main course of a feeding frenzy at Sotheby’s. No, in traditional terms of success, Fort Worth Circlers had little. But the argument issued ever so eloquently by the Amon Carter – that the Circlers are partly responsible for the way our primo state currently looks and feels – is hard to rebut. We can’t tell you in any empirical way how many living Texas artists, architects, writers, and other creative types were influenced by the Circlers. But we would be harder pressed to determine which of us were not influenced by people influenced by people influenced by the Fort Worth Circle.

The Circlers helped usher in Modernism here. The gingerly exploratory and always self-conscious mode of painting, and of writing and drama and thinking, was already firmly established in the international megalopolises where it first started springing up in the late 1800s and early 1900s. By the time the Circlers got ’round to it, Modernism wasn’t exactly old hat, but it wasn’t avant-garde either. The group members weren’t worrying about having their doors beaten down by lustful collectors, mainly New Yorkers on the seemingly endless hunt for the Next Big Thing. Selling work seemed ancillary to hanging out. The Circlers were all friends, acquaintances, family members, and sometimes collaborators, who shared an adventurous sensibility that informed both their outlook on the creative arts and also on life in general. Painting, Circler Kelly Fearing is quoted as saying, “was a kind of fantasy/romanticism that existed with all of [us] during WWII. A kind of escapism.”

Though you needn’t ask, some Intimate Modernism pieces could hang with some more popular (read: monetarily valuable) examples of the style. The show is expansive, with nearly 100 works in all, which allows the viewer to follow individual artists’ progressions. The person who seems to have developed the most was Utter, who went from reductive doodler to singular stylist in about a decade. In the early ’50s, at the height of his powers, he focused almost exclusively on his “embellished forms,” playfully organic shapes that have almost as much character as some people I know. Primitive forms fascinated early Modernist painters, who saw ancient civilizations’ crude markings as uninhibited – and honest – expressions of creativity. The Modernists longed to promote the same kind of aesthetic purity, mainly to undo centuries of suffocating, disingenuous mannerisms. Utter evidently did his part to eradicate parochialism on the Texas front.

Utter also shares with Kandinsky, de Kooning, Motherwell, and some of his other contemporaries a preternaturally discerning eye for color. Always tempered but never dull, Utter’s magical blends of blues, grays, browns, and oranges resemble hues found in nature but are unlike anything you’ve probably ever seen. All of Utter’s entries are small, as are most of Intimate Modernism’s strongest pieces, which is surprising, considering that Modernism was all about huge canvases and personalities. Tablet-sized etchings, a favored medium among the Fort Worth Circle, do more than most of the show’s bigger entries to emphasize the group’s cred. The standout etcher here is Fearing, whose frenetic and lovingly detailed tableaux of mythological creatures and mises en scene transcend their humble scale while delighting in it. Looking at them, you might get the sense that they wouldn’t have worked any other way: larger, smaller, or any other size in between. Basically, they’re perfect.

Because the Circlers were well aware of the world outside, the curators have striven to meet our enlightened cultural perspective half-way. They endeavor to soothe any qualms we may have rather than dismiss us as lefty crybabies. Emily Guthrie Smith’s “The Halloween Party” (1943) lives up to its title, depicting revelers in various costumes, including a man in blackface. In the accompanying label, the curators elegantly note, “Blackface was a popular American performance tradition now discredited as a perpetuation of a racist stereotype.” For Dickson Reeder’s “Conversation Piece,” a portrait of an African-American girl and the painter’s young white son, the label’s author points out, “The young girl seems to be integral to the Reeder family – her figure is the more highly finished and sensitively rendered of the two – but the painting leaves intriguing conceptual questions about the nature of childhood friendships during a period of severe racial prejudice.” Reeder was the man in blackface in Smith’s painting.

This Saturday, Fort Worth historian Quentin McGown will discuss Utter’s Fort Worth Landmarks Suite, a collection of 16 watercolors commissioned in the late ’50s by local preservationist Sam Cantey III. On view through June 15 in a separate exhibition, Landmark Suite, according to the Amon Carter, documents 1950s-Fort Worth’s “rapidly disappearing” early architecture. The series, we could also declare, shaped 2008-Fort Worth’s rapidly appearing new architecture. The people designing and erecting the buildings here, in a city whose landscape has been primed to embrace Progress by artists, writers, musicians, dancers, actors – essentially, by every creative capitalist in town – are the people who have been influenced by the people who have been influenced by the Fort Worth Circle. And their names will be around long after their bodies vanish like so much pipin’-hot pie.