Parents, it’s time for another dreaded film adaptation of a beloved childhood book. 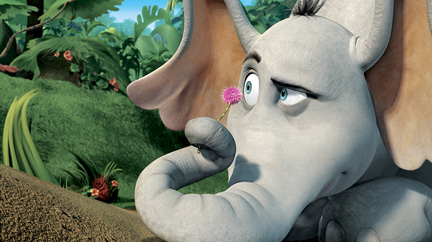 This time, it’s Dr. Seuss’s Horton Hears a Who! Oh, you’re going to have to see it, there’s no question. Your kids have seen the commercials and all of the CGI on display – they demand it. The question is: How will you fare while watching it? The answer is, not too badly. It’s not Pixar (The Incredibles, Ratatouille), but neither is it an endless stream of pop-culture references parading around in place of humor or story. However, it mostly misses the mark of feeling like a Seuss story, and a good portion of the jokes fall flat. Still, you’re not in for too terrible of a time.

The film follows Horton (voiced by Jim Carrey), a friendly if goofy elephant who’s mostly derided by the other denizens of the Jungle of Nool. One day, his huge ears hear a tiny sound coming from a speck of dust resting on a flower. Horton talks to the speck and learns it’s not a speck but an entire world containing tiny people called Whos, living in the city of Whoville, led by the Mayor of Whoville (voiced by Steve Carell). The Mayor and Horton communicate, and Horton decides to take Whoville to a cave in the top of a mountain, where Whoville and all the Whos will be safe. As he continues to talk to the speck, he draws derision from the other jungle denizens, including a rule-enforcing Kangaroo (voiced by Carol Burnett) who wants the speck destroyed out of fear that it will spark imagination and threaten the status quo. Meanwhile, as Whoville is carried around, it undergoes dramatic changes (earthquakes, dropping temperatures), and the Mayor has to convince the city council and all of Whoville that their entire world is nothing but a tiny speck and that they are in grave danger.

Yeah, it’s that allegory we all love. Of course, it has only enough meat for a good 30 minutes, which served it well when it was brought to life in 1970 as an animated special by famed animator Chuck Jones (who previously adapted Seuss to TV in How the Grinch Stole Christmas). But here, padding is the name of the game to get things to feature length. Some scenes, like Horton warily crossing a creaky wooden bridge and a chase with Vlad the vulture (voiced by Will Arnett), don’t feel forced. Others, though, feel out of place, like an out-of-nowhere anime parody that, while hilarious, goes too long. And “out of place” really describes much of the movie’s jokes and its tone. Most of the comedy is manic and rapidly paced, from Carrey’s mugging and mostly flat jokes to the bits of physical comedy. Sure, there aren’t a ton of pop-culture references (though there are a few, including “WhoSpace” – eeesh), but most of the humor just doesn’t jive with the quirky and out-there yet humble world of Dr. Seuss.

It’s too bad, though, because most of the famous actors voicing their parts could’ve done the job well. Carrey has that jovial tone, with a hint of humility that would’ve been perfect for Horton, if he weren’t cracking jokes that were old when the first Horton special aired. Carell is also a good choice for the Mayor of Whoville, but he gets stuck acting comically inept and screaming most of the time. Worse yet, the two of them together could’ve made a great pairing of characters, but the movie almost seems to go out of its way to keep out any meaningful character moments in favor of throwing a joke at the audience to keep their eyes on the screen. Still, some supporting parts, like Isla Fisher as a Who scientist, come out well, though others, like Burnett’s, feel, again, out of place.

Whoville and the Jungle of Nool are beautifully designed and animated. Nool is full of weird plants and animals, and Whoville has that strange architecture and tons of Seuss mechanisms and toys. Horton is animated well, bouncy while still looking like a hefty elephant, and it’s always fun to watch as the Whos’ arms bend and curve in that cartoony way. And Vlad, with his dirty, ruffled feathers and swift movements, is especially captivating. And there are more than a few times, from Whoville’s being dislodged from its resting place in the beginning to the Whos’ screams to be heard, where the wonder of Seuss’ world shines through.